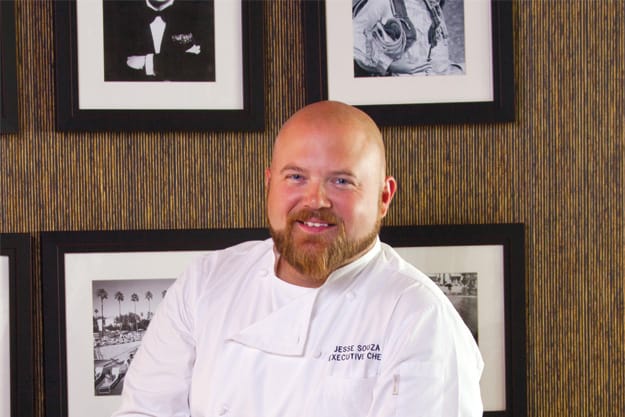 Executive Chef, Circa 59 at the Riviera Palm Springs

In This Video – Jesse Souza, Executive Chef, Circa 59 at the Riviera Palm Springs prepares Duck confit on a cornmeal crepes with apple slaw & chipotle blackberry sauce.

As Executive Chef of award-winning Circa 59 restaurant at the iconic Riviera Palm Springs, Chef Jesse Souza creates epicurean masterpieces with a modern twist to match the legendary resort’s mid-century modern décor. With more than 17 years of culinary experience and extensive time spent cooking in Noble House kitchens across the country, Chef Souza brings a wealth of excitement and expertise in fine dining to the kitchen and table.

Chef Souza joins the resort most recently from his role as executive chef at Portofino Hotel & Marina in Redondo Beach, Calif. He joined Noble House Hotels & Resorts in 2002, working at the exclusive Little Palm Island Resort & Spa in the Florida Keys. In 2007, Souza took the lead at BALEENmiami at The Grove Isle Hotel & Spa, soon moving to BALEENnaples at LaPlaya Beach & Golf Resort in 2008.

Along the way, Souza had many successful stints launching Chispa restaurant in Miami, where his team developed the Nouveau Latin Cuisine for which the brand successfully became known. In 2005, Souza returned to his native New England to work closely with the farmers, fisherman and artisans of the region while at Havana Restaurant and Natasha’s, two prominent Maine restaurants.