Jessica Chastain Loves to Push Herself Outside Her Comfort Zone 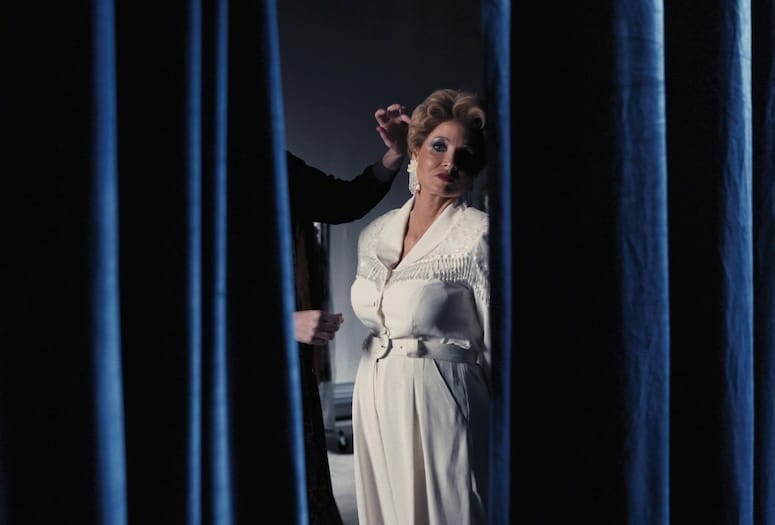 Editor's Note: The 2022 Palm Springs International Film Festival, originally scheduled to run January 7-17, 2022 has been canceled effective Dec. 29 and will return with an -in-person event in 2023.

“I’m not a singer,” Chastain attests on a video call from her place in New York, clearly still processing the experience as her blue eyes dart back and forth under her signature red locks, looking far less fearless than the characters she typically portrays. “I’m an actor who can tell the story through a song.” She pauses for a beat. “I hope.”

Among the 31 songs Chastain recorded with Burnett, who famously crafted the music for O Brother, Where Art Thou? and Walk the Line, was Wynette’s iconic “Stand By Your Man.” Chastain cites taking on the anthemic and oft debated ballad as one of the biggest challenges of her career. “Mike Shannon and I were talking about it, and I told him it’s worse than full-frontal nudity,” she says with a snicker. “It could not be more uncomfortable.” 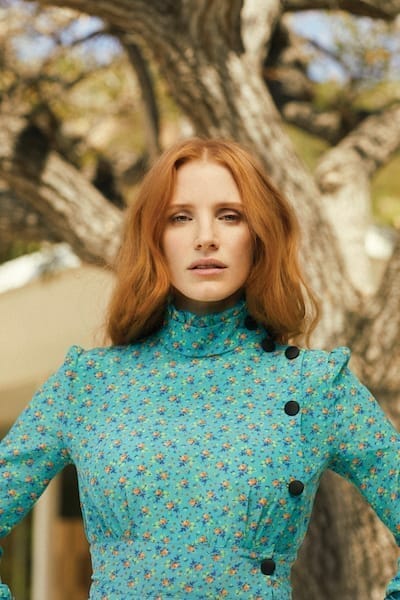 Jessica Chastain: "In some sense, I feel like if it’s not painful, in terms of stress and anxiety, then I’m not worthy of getting the opportunity to be in the position I’m in. It shouldn’t feel easy."

Chastain has fully embraced uncomfortability — including, yes, full-frontal nudity — over the past year while portraying emotionally bereft tech executive Mira Phillips in HBO’s Scenes from a Marriage and bubbly televangelist Tammy Faye Bakker in The Eyes of Tammy Faye. Both performances heaped  more critical acclaim on the two-time Oscar nominee, who will be honored with the Desert Palm Achievement Award at this month’s Palm Springs International Film Festival for her humanizing portrayal of campy PTL co-founder and LGBTQ+ icon Tammy Faye.

Despite crooning tunes like “The Sun Will Shine Again” and “Jesus Keeps Takin’ Me Higher & Higher” on screen in The Eyes of Tammy Faye, which premiered at the Toronto Film Festival last September, Chastain says the process hasn’t been much easier for her in George & Tammy because these Tammys are so — as Tammy Faye might put in her chirpy Minnesotan accent — gosh darn different.

“Tammy Faye ministered through song without a microphone, so she was making sure everyone could hear her from the very first note,” Chastain says. “There was not a lot of variation. She was just yelling it out to Jesus. That was one way to sing. Now, I’m learning another way to sing. We’ll see. I’m a little stressed out about it.” 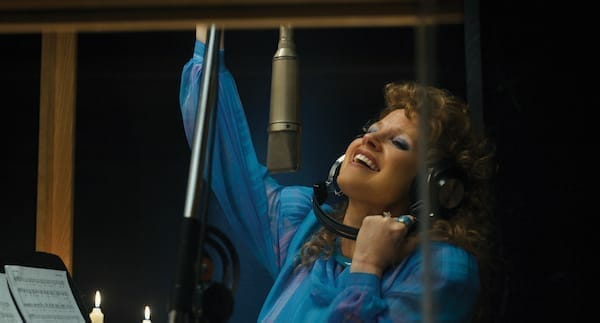 "From the very first day of shooting, she disappeared into the character,” says The Eyes of Tammy Faye director Michael Showalter.
Overcoming seemingly insurmountable pressure is a sensation that the Julliard-trained actress intentionally seeks out when contemplating her next project. In fact, Chastain says she was recently texting with actor pal (and Succession star) Jeremy Strong about this insatiable desire she constantly feels to drop herself into tricky places — physically, emotionally, or otherwise — in her work. She thinks she landed on why she does it.

“I feel so lucky to get to do this job,” explains Chastain, who had a self-described tough upbringing in Sacramento. “It’s like I’ve won the lottery. It’s something I’ve always wanted to do since I was a little kid. In some sense, I feel like if it’s not painful, in terms of stress and anxiety, then I’m not worthy of getting the opportunity to be in the position I’m in. It shouldn’t feel easy. When it feels easy, then you’re taking it for granted.”

Chastain was first drawn to Tammy Faye nearly a decade ago around the time she was starring as undaunted CIA analyst Mya in Zero Dark Thirty, which earned Chastain her second Oscar nomination in 2012. (The first came the year prior for playing hapless housewife Celia Foote in The Help.) One night on TV, she was enraptured by the 2000 documentary also tilted The Eyes of Tammy Faye directed by Fenton Bailey and Randy Barbato and narrated by RuPaul.

In the eyes of Chastain, Tammy Faye and her loved-filled journey was the complete anthesis of Mya and her revenge-seeking mission. Chastain, who started her production company Freckle Films in 2016, secured the rights and spent seven years working to produce the biopic, which was greenlit in 2019 by Searchlight with Chastain and Andrew Garfield as Tammy Faye and Jim Bakker. 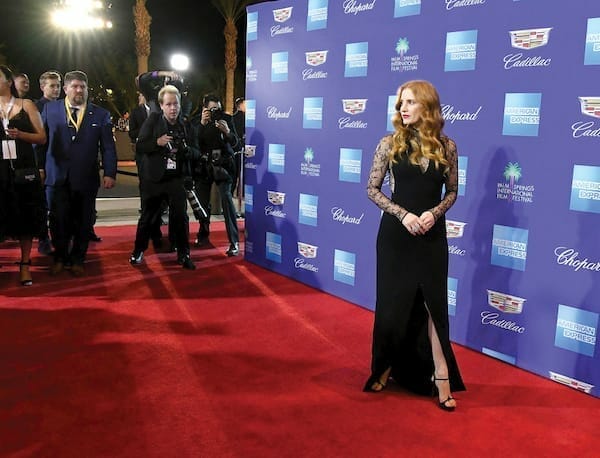 The film chronicles the couple, who met attending a Minneapolis bible college in the 1960s, throughout the decades as they ascend from provincial, puppet-wielding road-show ministers to sensational, satellite-equipped televangelists, whose PTL empire eventually crumbles amid financial ruin and sex scandals.

“As the producer, I was trying to get the movie made,” she recalls. “As the actor, I was trying to sabotage it. I was begging Searchlight for more time. Once we did the pre-record of the music, that’s when I knew there was no getting out of it because they spent all this money. As nervous and as scared as I was to do it, I was like, ‘Well, I’m in it now.’”

While Chastain questioned her ability, The Eyes of Tammy Faye director Michael Showalter was confident she would hit paydirt long before the first lash was glued to her eyes. In the same way that she embodied Holocaust savior Antonina Żabiński in The Zookeeper’s Wife and poker mastermind Molly Bloom in Molly’s Game, The Big Sick filmmaker knew Chastain would bring an encyclopedic awareness of Tammy Faye’s quirks to the production.

“I never doubted for an instant that Jessica wasn’t going to nail the role,” he says. “We recorded the music in June, which was four months before we began shooting. Even then, with no makeup or wardrobe, she already was inhabiting the character vocally. In early October, when we began to incorporate the hair, make-up and wardrobe, I saw Jessica physically transforming as well. She was channeling Tammy Faye’s mannerisms. From the very first day of shooting, she disappeared into the character.”

“Tammy Faye loved Palm Springs and was beloved there.” 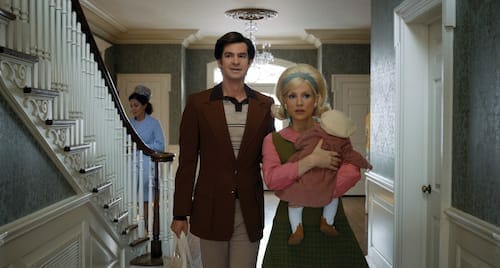 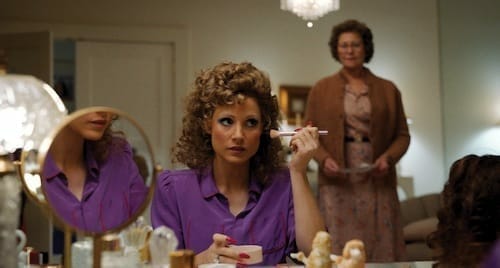 The Eyes of Tammy Faye chronicles the Bakkers from the 1960s to the ’90s.

For Chastain, she felt the most self-assured inhabiting Tammy Faye during a moment of culinary effortlessness. “The one time I really started feeling comfortable — and it was few and far between because I was pretty hard on myself — was when Showalter asked me to improv a scene,” Chastain recalls of riffing while filming a cooking segment where Tammy Faye is baking cupcakes. “I knew the character so well, it wasn’t that difficult. There were all these things I’d heard her say about fudge and Smell-O-Vision. At that point, it felt like second nature.”

The documentarians provided Chastain and the crew with hundreds of hours of unused footage of Tammy Faye, who lived off and on in the Coachella Valley throughout the 1980s and ’90s before moving to North Carolina to be closer to her grandchildren in 1999. She died of colon cancer in 2007. The Eyes of Tammy Faye actually opens in Palm Springs with an extreme close-up of Chastain’s face totally transformed by prosthetics and paint as Tammy Faye balks at downplaying her signature look and divulges that her make-up has been permanently tattooed. 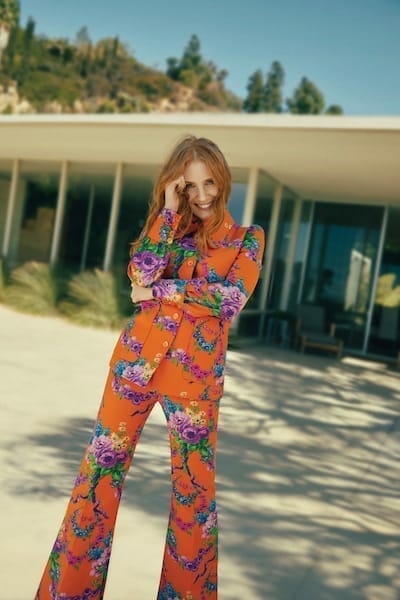 “Tammy Faye  loved Palm Springs and was beloved there,” Chastain says. “I have all these videos of her shopping and being in the church there. It was an important place for her to be, so I’m happy we have part of her life represented there.”

After tackling the world’s most famous Tammys, the next obstacles Chastain could envision overcoming is moving behind the camera to direct or acting in a different language. Chastain, who’s been married to Italian fashion executive Gian Luca Passi de Preposulo since 2017 and has two children, notes that such a performance would require much more than merely remembering her lines.

“I speak a little Italian, and I studied French,” she says. “If I did something in another language, it’d be a situation where I’d have to do an intensive for six months before shooting, so I didn’t have to worry about the language as I was speaking it, so I could embody the character.”

In the meantime, Chastain has a bit more levity on her agenda: She’s starring as the leader of a band of globe-trotting female spies in the action flick The 355, out Jan. 7. The Mission: Impossible-style film, which also features Lupita Nyong’o and Penélope Cruz, was a passion project for Chastain, a longtime champion for equality in the entertainment industry. 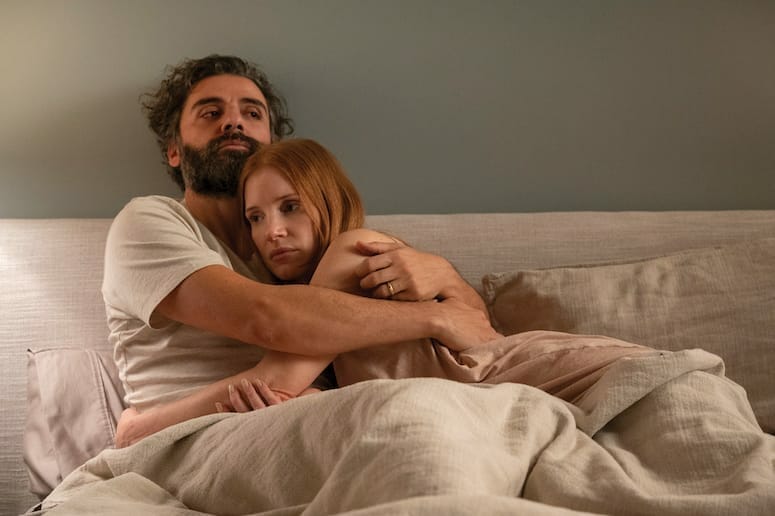 Jessica Chastain stars opposite Oscar Isaac in HBO’s Scenes from a Marriage.

“I loved being there with all the girls,” Chastain says of the high-energy production that spanned Paris, Morocco, and London. “It’s an interesting film because it wasn’t made by a studio. It was all of us actors raising money for the film. We made it for very little, which is shocking considering how large it feels.”

Chastain will take a break from promoting The 355 and working on George & Tammy this month to return to the Palm Springs International Film Festival for a third time. (Chastain was honored by the festival with the Spotlight Award in 2012 and the Chairman’s Award in 2018.) She’ll be in the company of several friends and colleagues, including her Eyes of Tammy Faye co-star Garfield, who is receiving the Desert Palm Award for Tick, Tick … Boom!, and her 355 co-star Penélope Cruz, who is being honored with the International Star Award for Parallel Mothers. A sojourn to Palm Springs, it seems, is exactly what Chastain needs.

“A friend of mine got a house there for the pandemic,” she says. “I was so jealous living vicariously through her experience in Palm Springs. I love it out there. I love the Old Hollywood feel of the restaurants and hotels. The people are super nice. I love the desert. I love the heat.”

• READ NEXT: Best Flicks to Watch at the Palm Springs Film Festival.