50 Years of Jethro Tull: Ian Anderson Chats About the Evolution 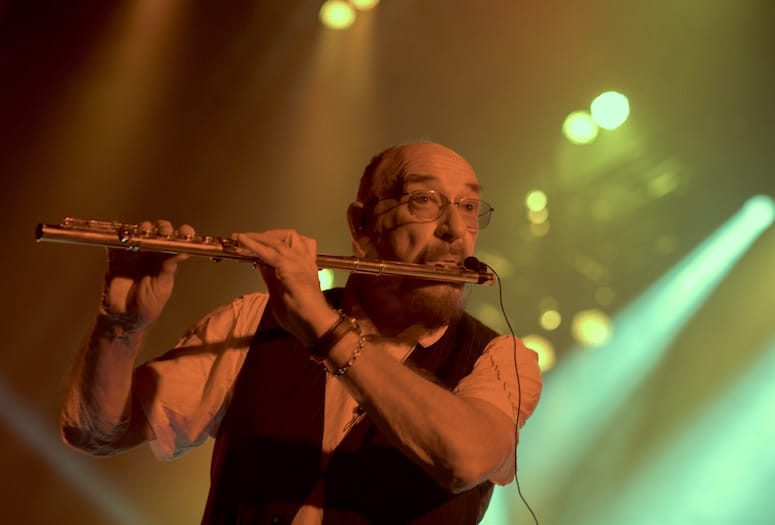 It’s inconceivable that some of the greatest classic bands of all time are passing the midcentury mark. The Rolling Stones aside (who have been touring since the 1890s), there are some surprising names that every few years pull the Fenders and Martins out of the attic and get back on the road. Whether it’s ego, a needed Social Security supplement, or the clamor of a new generation of fans, groups such as Led Zeppelin; the Moody Blues; the Beach Boys; Crosby, Stills, and Nash; Santana; the Who; and Deep Purple can still fill the bleachers.

On July 5 at Fantasy Springs Resort and Casino, one of the most original bands of the late ’60s will be playing their unique blend of rock, folk, blues, jazz, and progressive rock. Jethro Tull (named after a 19th-century agronomist after leader Ian Anderson tired of coming up with a new name every gig for his nascent band) is touring in celebration of their first U.S. tour in 1969 just after the release of their bluesy This Was album.

Anderson, whose distinctive one-legged, flute playing stance is, in fact, the Jethro Tull logo, agreed to a phone interview with Palm Springs Life while his wife was in a curry shop getting takeaway for a family dinner — a family that includes son-in-law, Andrew Lincoln, former star of The Walking Dead.

I wouldn't say it's an obsession. In spite of the fact that, as we speak, my wife is ordering a takeaway curry since I have some of my family over for dinner tonight. But it's something that I've enjoyed eating since, I suppose since I was about 19 years old. We had an Indian drummer from Manchester for a little while. His name was Richie. His mother cooked a meal for us. It was the first Indian food I’d had. I think to wind us up a little bit, Richie had asked his mom to make it really crazy hot. And so everybody sat down to eat this food and were coughing and sputtering and drinking copious amount of cooling water. I, on the other hand, for some reason just thought, Well, that was the greatest thing I've ever had. 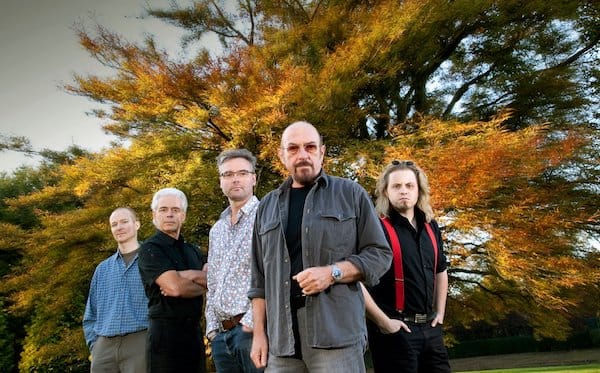 What can we expect from this tour? Are you going to be doing most of This Was?

There are indeed a few songs from the very first album. We take it, not entirely chronologically, but it features, I suppose, most of the material is from the first 10, 15 years of Jethro Tull. I think the period where most of our fans got to know about us was [the] end of the ’60s through the end of the ’70s.

Jethro Tull has always been well known for showmanship.

There's a little bit of psychedelic light show stuff going on here and there. Which was kind of a little bit like when we first appeared at the Fillmore East.

On This Was, there's a lot of blues influence because of Mick Abrahams. When he went on to Blodwyn Pig, did his leaving Jethro Tull free you creatively to stretch out toward more progressive rock and jazz?

Indeed it did, because in the summer of 1968 when we'd been together for about seven months I suppose, I began to write the music that would become the Stand Up album in ’69. Some of it I played to Mick, and we went through it a little bit. But it wasn't something that I think he found ... he readily ... could absorb. And then Mick began to withdraw a little bit from the band musically and in terms of reliability. [He went] back to work with some guys who he'd work with before like Jack Lancaster and they went on to form Blodwyn Pig. So, everything was fine. Blodwyn Pig was adopted by the Chrysalis Record Company and given a very good head start.

So you were less constrained by that previous sound?

Yes, freeing, certainly in the sense of creativity. And with the changing of some of the musicians, of course there comes a new lease at life as people bring their own idiosyncrasies, musically and stylistically, and perhaps technically, into the equation, which may offer a new horizon. [I write] first for myself, secondly for the other musicians in the band, and thirdly, to get some acceptance from our listeners. If I'm not having a good time, no one else is gonna have a good time. So, I set out to please myself. I think that's the best way for a songwriter to be. You gotta be true to yourself, and not just turn into a factory producing hits. To me that's just like [offering] up the musical equivalent of a lap dance. 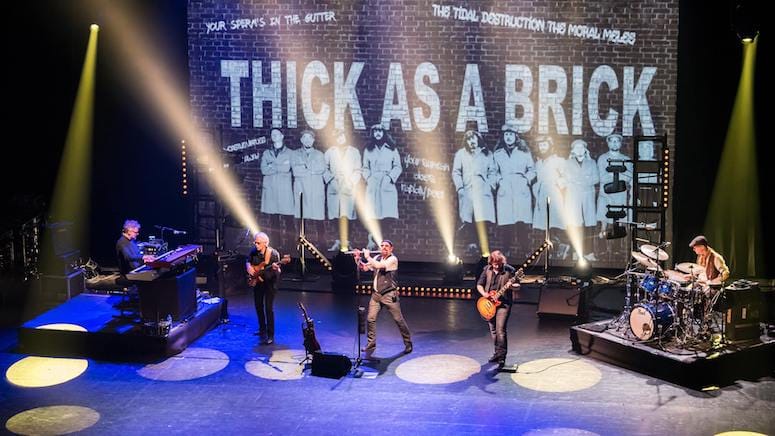 I've read that the impetus for Thick as a Brick was to satirize the sort of grand rock opera albums that were popular at the time.

No, the inception of the album, really, was all from the opening stanza of the song: "Really don't mind if you sit this one out.” It's a bit of a slap in the face to the listener. I went on to develop the music as if it was written by a precocious schoolboy. That was the whole thing lyrically that followed that thread. And of course to make a little bit of a spoof, you have to be true to the musical stereotype, if you like. So, of course, it became a prog rock album, isn't it? No way in dodging that. It wasn't all dense, heavy progressive rock sounding. It had a little bit more in the way of contrast and changes within the shape of the album structure, within the shape of the song. I'm always being careful about making sure things are in different keys, different tempos. Sometimes it's upbeat and cheery. Sometimes it's grim and whingeing and moan-y. Sometimes it's aggressive. Sometimes it's, I roll over on my back and I let you tickle my tummy.

I understand though that it was difficult for band members at the time to execute the entire album at one go, especially live; it presented a lot of difficulties musically.

It presented a lot of difficulties in the sense you have to learn it. You gotta memorize it all, and you gotta technically play, not only to make the record, but then to be able to recreate it on stage. So yes, it presents difficulties, but they're difficulties that grown-up musicians in long pants should be able to deal with. It's part of what they do. It's certainly easier than being a classical flutist and having to play a Mozart flute concerto.

I understand the last time you performed, the entire Thick as a Brick was in Iceland in 2012.

I'm not sure that was the actual last performance, but it was in 2012 when we went there to do Thick as a Brick I and Thick as a Brick II, the 40-year-later sequel album. So, been there, done that in 2012, and I don't feel the need to do that again anytime soon.

Do people still ask what's become of Gerald Bostock (the fictitious young author of Thick as a Brick)?

I suppose four or five years ago, yes, because that was when they threw the new album material and the promotion and marketing and all the rest of it. But I think Gerald Bostock is a fictitious character. He propped up again in 2012. In a kind of a roundabout way in a follow-up album called Homo Erraticus, released in 2014. But, again, when you've done these things once or twice or maybe three times, it's, I think, perhaps a good idea to let it lie. It's best to quit while you’re slightly ahead.

I do have to tell you one quick anecdote. I used to live in Copenhagen. And in the ’80s, I had a friend who was a law student. And one day he came to me with this album, Thick as a Brick, and he said, "I found this record written by a 12- year-old boy." And he was absolutely convinced that there was a real Gerald Bostock. As late as 2000, I saw him in Mexico and he still believed Gerald Bostock was a real person, was a real poet. The clincher is that this guy, as a far as I know still believes in Gerald Bostock, and went on to become one of Denmark's Superior Court judges.

Well, it's not to suggest his tendency to gullibility. I suppose in a way you could make the same argument for the New Testament. There are those people who believe in Jesus Christ. Jesus was the son of God. And there are those of us who believe in Jesus of Nazareth. He was a real historical character, he was a slightly contemptuous Jewish prophet of his age, and he fell foul of the authorities, sticking to his guns. And I'm a firm believer in Jesus, but I can't classify myself as a Christian.

However, I am a huge supporter of the Bible, and I'm a huge supporter of Christianity as a religion. It's just ... easier to believe in the idea and the spirit of the Christian message, but when it comes to the detail, I have to say, "Whoop, no, wait a minute. This is as a far as I can go." And I think the same thing applies. You can want to believe in the idea of this schoolboy, the precocious kid who is writing all this stuff. But he doesn't really understand himself. He's got a distorted idea of the adult world … because of the times in which he lives and his access to knowledge, which is really through books and comics and through the culture of that time. And then sometimes you were in for a bit of a shock when you realized it wasn't really like that. That's the Gerald Bostock I wanted to present. A slightly confused, slightly misguided child in for a rude awakening when he became a young adult.

If there's any skill in writing that, it was to try and find just that middle ground between people taking it seriously and knowing full well that it was a slightly surreal spoof. And I think I kind of got it right, because I would guess that 50 percent of the people were taken in by it, and 50 percent of the people got it straight away. There’s probably some people who are probably left wondering, "Was it verbatim? Was it real, or was it all a hoax?”

And what was it?

The answer is it was both of those things.