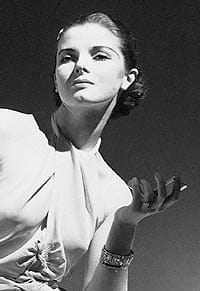 “The fake can be fun, the synthetic can put up a nice show, but still eyes turn unswervingly to the real thing,” Vogue declared in 1939, as Tiffany & Co. draped jewels on debutantes and actresses lying across its pages.

Using Tiffany jewelry was out of the question, until 1933, when the company first gave permission for photographs of its twinkling jewels. It was after the death of Louis Comfort Tiffany, son of Tiffany’s founder, who shunned the idea of advertising “art jewelry,” writes John Loring, design director for Tiffany & Co. since 1979 and author of Tiffany in Fashion (Abrams, 2003).

After 1933, Tiffany & Co. outfitted models with winking wristlets and rings until World War II, when the company began manufacturing for the U.S. war effort. Tiffany & Co. returned to the world in the 1950s, its gems gilding screen goddesses and royalty alike.

Celebrated designer Jean Schlumberger created jewelry as a fashion statement and gave Tiffany & Co. its first-ever fashion shoot. His walnut-sized diamond brooches and glistening pearls again adorned models and society beauties in designer fashion magazines. By the 1960s, Tiffany gilt-laden dragons and animals by designer Donald Claflin often stole the limelight from the designer styles they were only supposed to enhance.

In the 1970s, Elsa Peretti’s organic and sculptured designs for Tiffany & Co. gave women individuality while wearing monochromatic sportswear. In the 1980s, Paloma Picasso began designing jewelry that complemented the more colorful designer palette. Her use of large and brightly colored jewels became a Tiffany staple. “There is always an element of classicism in everything I do, mixed with an element of fun,” she told The Washington Post in 1988.

Tiffany & Co., which opened a store last year in The Gardens on El Paseo in Palm Desert, continues its tradition of adding glamour to the cinema by becoming a new sponsor of the Palm Springs International Film Festival, and providing jewelry to its movie star guests.

“Tiffany & Co. analyzed the benefits of sponsoring the festival and chose to renew their sponsorship for three more years,” says Earl Greenburg, film festival chairman. “We could not be more delighted.”