When an architect designs her own house, she can unleash her imagination in ways that might not work for a client. But it’s not just a free-for-all: As with any project, she needs a clear strategy, and there are bound to be obstacles.

The Palm Springs vacation home Jill Lewis designed for her family was an exercise in decisive planning, deft communication, and critical response to site restrictions — complicated by the fact that she directed most of the construction from halfway around the world.

In 2005, Lewis and her husband, Michael Doyle, were living in Seattle, where she was a principal at Lane Williams Architects. On a visit to Palm Springs, two years after getting married in a rented William Cody house on Southridge Drive (and following several pilgrimages for Coachella), they purchased an empty lot in Movie Colony East. But their dream of a desert vacation home was put on hold after, as Lewis puts it, “life got in the way.” Mike, who works in finance, was sent to a position in Hong Kong, then Beijing, and finally Buenos Aires, where they still live. Along the way, they had three kids. After a couple of years during which they made frequent visits to see family and friends spread out across the U.S., they were exhausted.

“So we finally said, ‘Let’s build this vacation home, and from now on, when we come back to the U.S., we’ll just tell people we’re going to be here.’ That’s what Palm Springs is now: It’s a home base. We don’t have to fly all over the place or do much planning of any sort. We just say, ‘Come to us.’ ”

And people do — with good reason. Casa Caballeros, as the family has come to call the house, is warm, playful, and inviting yet grounded in serious architectural logic — the perfect embodiment of Palm Springs’ unique blend of levity and design sophistication.

A major driver for the design was Mike’s desire for a 75-foot lap pool. Squeezing that into the angular lot proved a challenge, one that Lewis resolved by placing the lap pool along the southern edge of the site and connecting it to the larger main swimming pool to form an L-shape. The house itself was designed to mirror that configuration, in a boomerang shape that creates a “yin-yang” relationship with the pool, she says. The living areas fill the inside of the boomerang, where they interact with the wraparound pool and outdoor spaces.

Once the pool was addressed, there were other issues. The lot’s position far from the street called for an extremely long driveway, which necessitated installation of new sewer, gas, and water lines. Further, Lewis had to contend with zoning laws that mandate a garage near the front of the property, a requirement that can create an unsightly entrance. 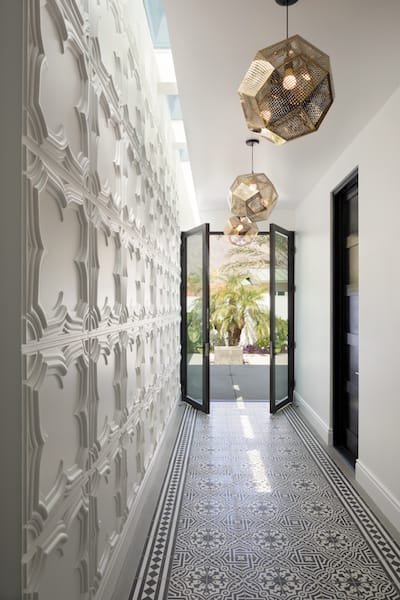 The entry is illuminated by a continuous skylight and Tom Dixon brass pendants.

To ameliorate this, she angled the garage and recessed its door, then developed an entry sequence that distracts from it, encouraging visitors into a courtyard with a poured-in-place concrete fountain and redirecting them to the home’s front door. Made of glass, the door allows light into the home, while the courtyard ensures privacy.

While Lewis was able to overcome the site’s challenges through her savvy design, there was still that one major difficulty: the fact that she would be at home in Argentina for most of the yearlong construction process. Early on, she completed a painstaking set of drawings and specifications, with materials and details preselected and sourced. There would be no swooping in with on-the-fly changes.

In the architect’s absence, her choice of contractor was key. “I needed somebody who was a very good communicator, a fearless communicator, and someone who had a good design eye,” she recalls. 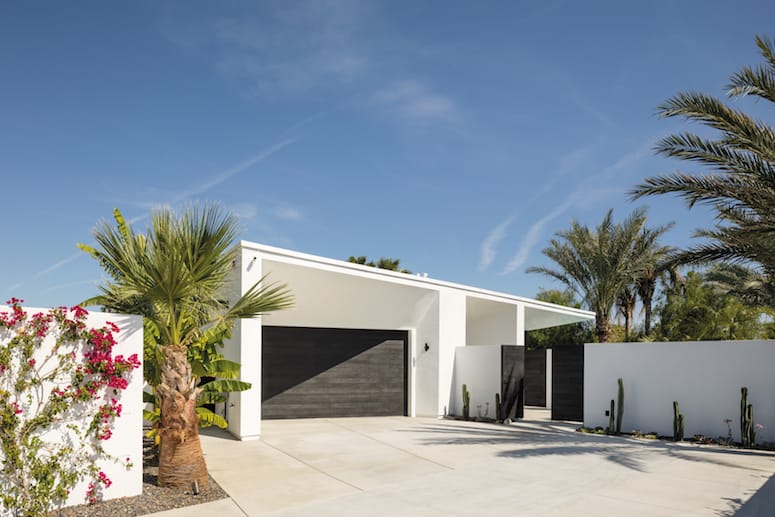 White stucco clads the façade, with its set-back, angled openings. Cypress doors by Delta Millworks are treated with the shou sugi ban burning technique, which leaves a charred layer that eliminates the need for paint or stain.

She found that in Scott Cullens, who has overseen Palm Pacific Construction in Palm Springs for 13 years. “Scott was the only person I met who checked all the boxes,” she says. “Because no matter how thorough your drawings are, there are still hundreds of micro-decisions happening every week, and you need someone whose gut is pointing them in the same direction you want it pointed.”

Thus work began on what they cheekily dubbed “the WhatsApp House,” for their primary method of communication. Throughout construction, Cullens kept Lewis in the loop through frequent messages, photos, and videos via the app, which enables instantaneous global conversations.

The house is warm, playful, and inviting yet grounded in serious architectural logic.

When it came to selecting finishes and décor, Lewis’ distance created another hurdle: There was no way for her to match colors. She came up with a simple and elegant solution by decorating the entire house — all permanent surfaces — in a consistent palette of black, white, and gray. Raw brass fixtures and lighting add warmth throughout.

The theme begins outside, where the garage door and courtyard gate are clad in cypress treated with the Japanese burning technique of shou sugi ban, which leaves a layer of charred wood in soft black — a striking contrast to the pure white stucco of the façade.

Generally, Lewis says, she prefers this type of neutral palette; what’s more, the limitations on color allowed her to indulge her passion for pattern, honed during her time in China, where she developed a line of textiles.
“Palm Springs is such an opportunity to be more adventurous,” she says. “I thought, ‘I just want to go crazy with pattern.’ I love it. Going crazy with color in the permanent finishes, I wasn’t quite ready for.”

The graphic riot begins in the dramatic entryway, with its black-and-white floor tiles in a classic Mediterranean pattern. These are juxtaposed with a white wall enlivened by 2-foot-square tiles in a plaster-relief quatrefoil design (intended for use on a ceiling), lit from above by an offset skylight that runs the length of the space. A powder room off the entry boasts dizzying black-and-white op-art wallpaper on all walls — and the ceiling.

One emerges into the sunny living area, which can open almost completely to the pool. Here, Lewis allowed herself a shot of color in the form of a pair of aqua tufted leather sofas. 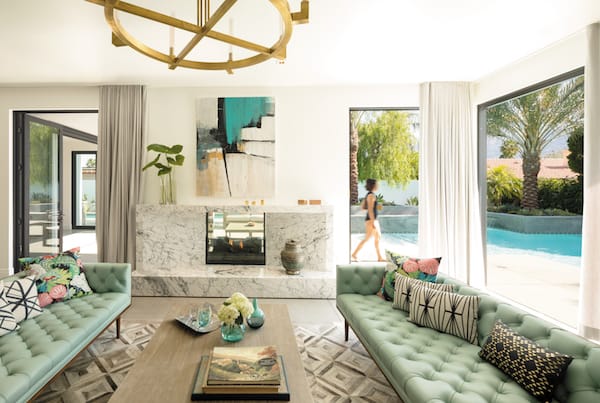 Aqua leather sofas from ModShop form a gathering spot in front of the fireplace, which opens on both sides for indoor-outdoor enjoyment. The sculptural marble surround repeats outside.

“For me, that was a really big risk. Now that it’s there, I’m like, of course, this doesn’t look crazy at all. But I thought I was being super wild,” she laughs. The room is anchored by a two-sided fireplace clad indoors and out in Bianco Venatino, a white marble with a rich, black vein — a material that reappears throughout the house. The adjoining kitchen features an island topped with the marble, custom gray cabinetry, and a geometric black, white, and gray tile backsplash that echoes the diamond pattern of the embedded tile “rug” in the dining area.

The idea of a central public space was heavily influenced by the family’s life in Argentina, Lewis says. “The habit of gathering with family and friends in groups of 10 or more every single weekend — lots of barbecues, asados, long days of socializing. That was really eye-opening. So the huge outdoor table by the pool, the huge island, the dining table that can handle 10 people, the table in the living room where you can have appetizers and play cards — those sort of gathering spots everywhere are things we see and experience and wanted to bring back for our own home.”

Attention to detail is evident all around, a result of Cullens’ careful construction — from the perfect bookmatching of the marble slabs on the fireplace to the cleverly concealed Murphy bed in the study. Even the laundry room is handsomely decked out with a white-and-gray tile wall and marble countertops.

In the master bedroom, which is decorated in whites of varying textures and a brass bed from Crate & Barrel, Mike can step through French doors right into his lap pool, with its lane divider of black-and-white patterned tile. The play of light from the water reflects on the bedroom ceiling.

But everyone’s favorite place is the boys’ room, where custom bunks and trundle beds can comfortably sleep six — perfect for visiting cousins and friends. The bunks can be closed off with curtains, and each has a little shelf and light for private reading. Like the rest of the house, the room is decorated in black and white, making it appropriate for 6-year-olds up to teenagers.

“I’m always advising clients to be careful about doing a cutesy kids’ room,” Lewis says. “Kids are more sophisticated than we often give them credit for. My two sons love super-graphic cool things; they didn’t want a room that looked like a little boy’s room. Black and white was really clean and simple, and I felt like, if I do this bunk-bed thing in black, then we can balance it with graphic patterns that make it feel fun. I don’t want it to seem like a dungeon.” 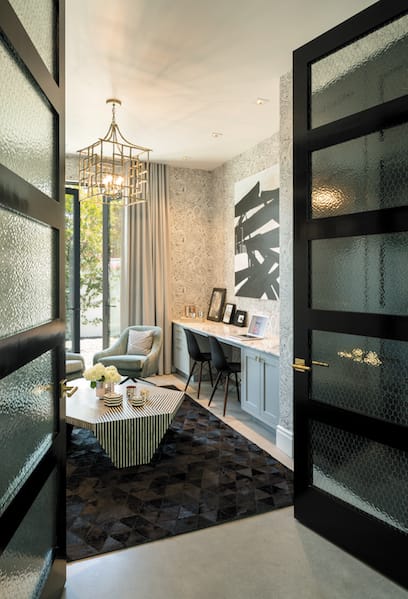 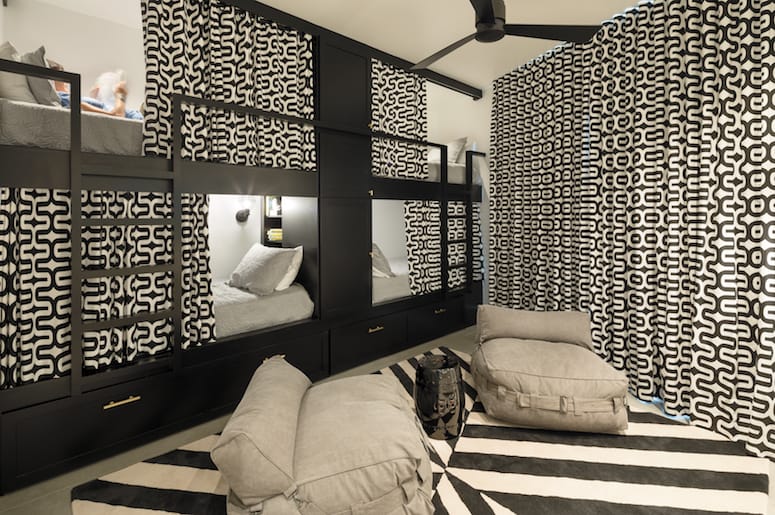 In the boys’ room, bunk beds, with trundles underneath for visitors, are equipped with lighting and shelves and can be closed off for privacy.

That breezy informality is evident throughout the house. It’s an intentional counterpart to the formal architectural language and details, atop which, she says, “I wanted this very warm and a little bit crazy, eclectic, and comfortable layer, so everyone would feel at home and could relax. I didn’t want it to feel too perfect or pristine.”

Lewis says she was inspired by Palm Springs’ complicated architectural history: the mishmash of midcentury modern, art deco, and Spanish mission styles that “made me feel like, wow, I can experiment.” Working for herself, with no client to please, she was able to weave elements picked up from her contextual design practice — the subdued elegance of Seattle, the urban flash of Hong Kong, the harmonious patterns of China, the social spirit of Argentina — into a cohesive whole that she hopes will one day be the family’s permanent home. “It’s the most energetic, confident, and fearless project I’ve ever done.” 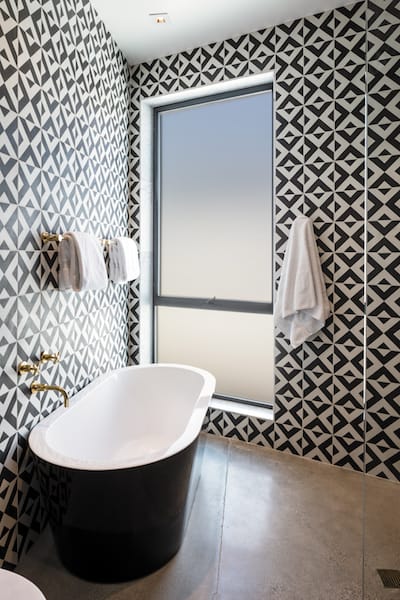 “Palm Springs is such an opportunity to be more adventurous. I thought, ‘I just want to go crazy with pattern.’ ”