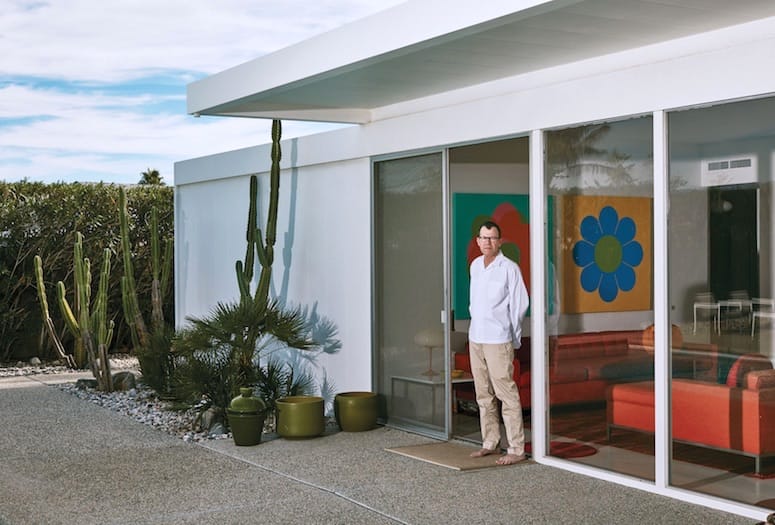 For longer than 30 years, artist Jim Isermann has powered his inventive work with the colors and contours of midcentury design. This month, finally, he’s opening an exhibition in the modernism-mad town where he lives: Palm Springs. His work already looms large at Palm Springs Art Museum in the form of an undulating, bright yellow wall installation stretching from the mezzanine level to the third-floor ceiling, but Jim Isermann: Copy. Pattern. Repeat. marks his first solo exhibition at the institution.

Or close to it. The show unfolds at the museum’s Architecture and Design Center, a 1966 E. Stewart Williams–designed glass-and-steel building that curator Brooke Hodge asserts was most conducive to the artist “engaging the structure.”

Isermann, who lives in a Donald Wexler–designed prefab Steel House, occupies a decidedly happy space in the art world where art and design coexist rather than quibble over definitions of “fine” and “craft.” Spend enough time looking at his work, from the pop art flower paintings in the exhibition to the vacuum-formed polystyrene wall installation at the museum’s main venue, and you’ll see how a love of design runs through his output. 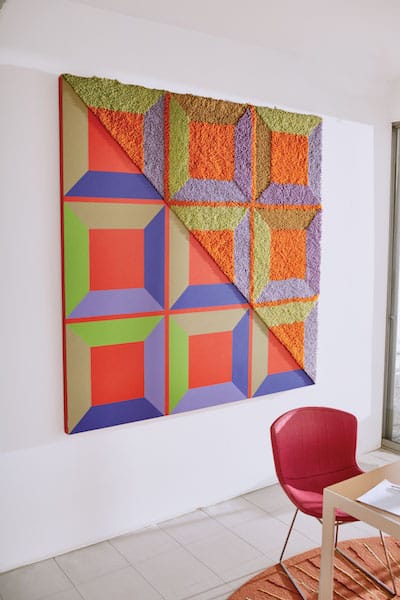 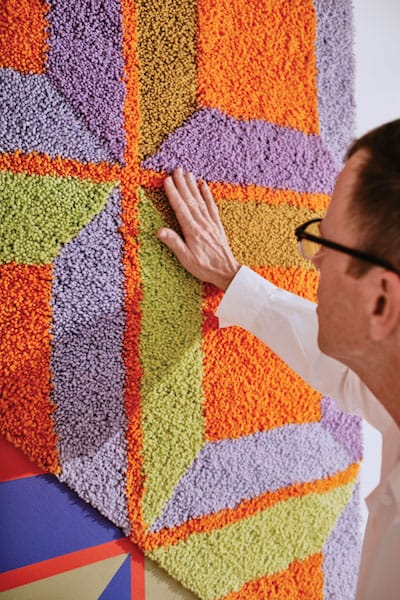 A "shag" painting – half enamel paint and half orlon acrylic yarn.

He found his Steel House while visiting Palm Springs to shop at thrift stores in the mid-1990s, and bought it in 1997 — “a wreck” with an intact structure, Isermann describes, that he and his partner, David Blomster, restored over a few years, adding a swimming pool and calling in Wexler to steer the design of a new studio with architects Lance O’Donnell and Ana Escalante.

The property — as well as the town’s abundance of angular rooflines, decorative cement block, and other staples of modernism — continuously triggers ideas for Isermann to extend the aesthetics of utilitarian design into the realm of fine art.

Indeed, two decades after he moved full-time to Palm Springs, Isermann appears at home, in his natural habitat.
“Let’s be honest,” says Louis Grachos, the museum’s executive director and CEO, who describes himself as “very passionate” about Isermann’s work. “Is there any artist more connected to the culture of what we know as Palm Springs?” 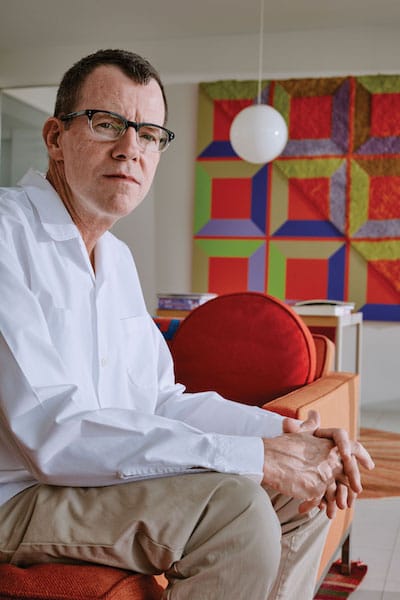 Jim Isermann in his home and studio. 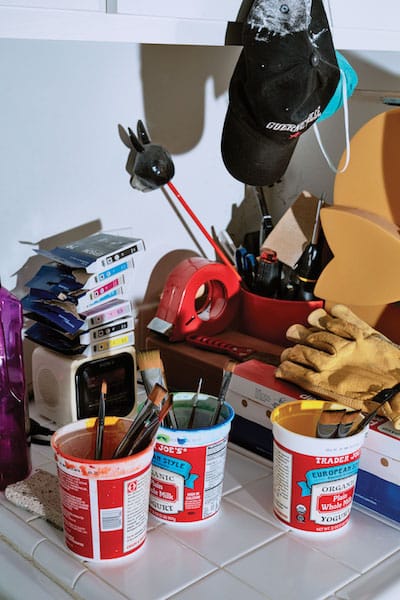 “I CAME TO CALIFORNIA because I had a fantasy about it in terms of the architecture, the beaches, and the landscape being very artificial,” Isermann says. “That was partly driven by looking at David Hockney paintings as an undergrad [at University of Wisconsin] in Milwaukee. I thought, ‘That looks like a great place to be.’ ”

What he found when he arrived in the late 1970s for grad school at California Institute of the Arts, aka CalArts, was a Southern California immersed in postwar design. “Californians seemed happy to get rid of everything and redecorate,” he says, explaining how he rummaged through thrift stores, swap meets, and flea markets. “I was looking at things and figuring out where they fit in the timeline of design. There were no reference books at the time. The recycling of all of that stuff was interesting to me. That’s what kept me in California.”

After earning his Master of Fine Arts, Isermann lived on the east side of Hollywood — next door to Mike Kelley, another artist who came from the Midwest and launched an influential career at CalArts — and created the Flower series of paintings, sculpture, and furniture that appear in Jim Isermann: Copy. Pattern. Repeat.

A move to a 1,000-square-foot studio with a 14-foot-high ceiling in Santa Monica gave him space to make larger pieces, including a series of 68-by-68-inch “shag” paintings: half enamel paint and half orlon acrylic yarn. (Palm Springs Art Museum acquired and unveiled one at its gala in January.)

“There was so much written about how ugly [the series] was, how it was an assault, and its relationship to the ’60s or ’70s pop culture,” Isermann recalls. “I never thought they were ugly. There was definitely a perversity about my interest in this stuff, and as with the earliest work, it sat on the fence between coming in and going out of style and coming back in again. I was thinking about what material I could work with that didn’t have that relationship.”

He turned to stained glass, a brilliant but short-lived pursuit — the cutting, grinding, and fitting of the glass was “excruciating” — that in 1992 yielded Failed Ideals, a public installation at the Fifth Street Metro Station in Long Beach.

As he continued creating in different media — including colorful textiles, vinyl decals, and vacuum-formed polystyrene — he refined his aesthetic and amplified its effect.

“Jim wants to make the world better by putting beautiful things in it,” says critic David Pagel, a professor of art theory and history at Claremont Graduate University and curator of Fifteen, a survey of Isermann’s work that opened at the artist’s alma mater and traveled to the Santa Monica Museum of Art in 1999. “The familiar shapes, iconography, and candy-coated palette are really welcoming and an inclusive way of looking at the world.” 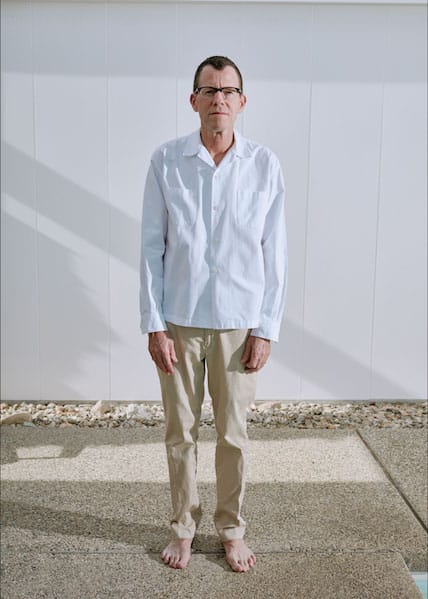 “Jim wants to make the world better by putting beautiful things in it.”

“When you think about the history of California art, he really has his place, and in a very interesting way,” says Grachos, who was the director of the Albright-Knox Art Gallery in Buffalo, New York, in 2005 when Isermann played a prominent role in its exhibition Extreme Abstraction, installing a mural-scale vinyl decal on one side of three long gallery spaces and op art and hard-edge paintings from the museum’s permanent collection to show on the facing walls. “He’s made outstanding contributions to extending the idea, or the notion, of abstraction.”

In addition to his work as a practicing artist, Isermann has influenced a generation of artists who studied under him at UCLA, where sculptor Charles Ray recruited him to teach when fellow sculptor and installation artist Nancy Rubins went on sabbatical, as well as Occidental College, where he taught art in a broader context, emphasizing architecture and design that students could see in their everyday lives. He takes a similar approach at University of California, Riverside, where he’s a professor of art. 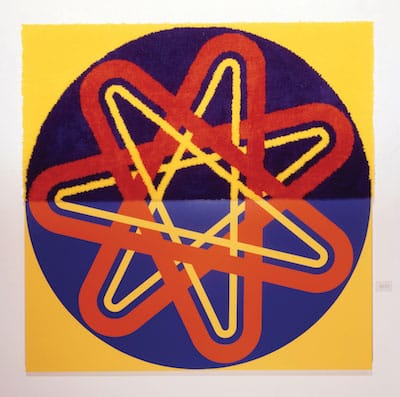 A decal pattern for the Palm Springs Art Museum.

However, Isermann prefers being alone in his studio — well, except for his dog, Happy — working out the complex systems underpinning his eye-popping geometric and algorithmic artwork.

His meticulous nature and Midwest work ethic have always driven his output, regardless of his medium. After completing his stained glass installation in Long Beach, Isermann pivoted to textiles, creating vibrant cotton wall hangings and supersized hand-braided cotton twill sculptures in a rainbow of colors — materials that straddled the line between art and kitsch and introduced stereotypically women’s craft into a masculine art world.

Pagel suggests it reflects the fact that Isermann himself felt like a misfit growing up gay in 1960s Milwaukee. “I think perhaps that experience of not fitting in, or seeing things from a different point of view, makes its way into his work,” he says. “Jim’s work can be for anybody. It’s about the commonness of humanity. That’s the democratic side of it: You can enjoy this stuff.” 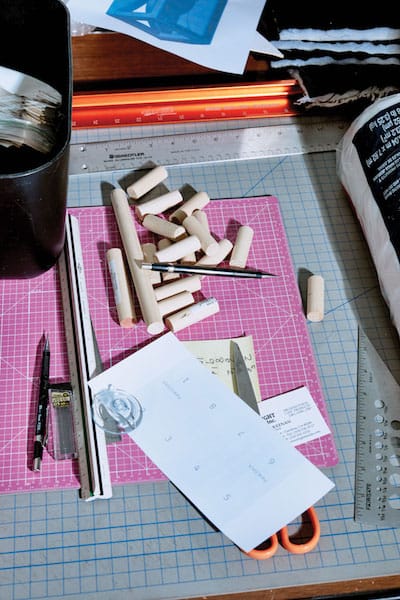 The artist's tools in his studio. 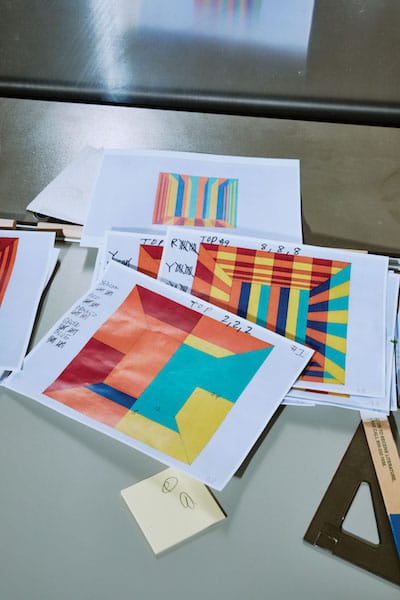 Drawings for a new series of paintings. 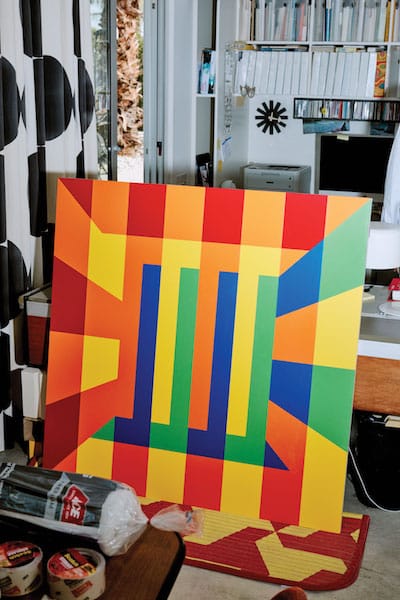 At 64 years old, the artist recognizes that “gayness” runs deep in his practice. “The hardest thing for me to talk about is the relationship between being gay and making all this work and this sensibility that’s driven the work from the very beginning,” he says. “It’s never been the primary read of the work, but it’s always been an undercurrent. I don’t want that to be ignored.”

THE EXHIBITION OPENING in Palm Springs draws on Isermann’s mid-1980s Flower series as well as recent paintings and sculptures. The first of three main components is where the artist “engages the structure” with a vinyl decal — a green-and-earth-tone graphic pattern riffing on his own architectural model — covering the Architecture and Design Center’s interior and exterior glass walls. It serves as a “hedge,” the artist says, for the second component: 26 Flower paintings hung inside an enclosed square space, where flower panel light fixtures hang from each corner of the ceiling. The third area, outside the square space, features a flower chair (on loan from L.A.’s Museum of Contemporary Art) and a flower mobile (on loan from Fondazione Sandretto Re Rebaudengo in Turin, Italy).

“What drew me to ask Jim to work on an exhibition [at the center] was the way he creates total environments,” Hodge says, noting Isermann envisioned his Flower pieces and other early works, including his 1982 Motel Modern installation at The Inn of Tomorrow in Anaheim, as a single entity. “That’s how we came up with the idea for the decal project on the windows.

“Part of my goal is to broaden everybody’s horizons,” she continues. “There’s a lot of work on that threshold, between art, architecture, and design.”

Rounding out the exhibition are a pair of Isermann’s recent large-scale Stacked Cubes sculptures and a dozen new red-white-and-blue acrylic paintings that exhaust the possibilities of a transparent cube.

Although Jim Isermann: Copy. Pattern. Repeat. omits many years of the artist’s work, it demonstrates the maturity of his practice and underscores the consistent and refined quality of his ideas and execution. “When you see an Isermann, you know you’ve seen an Isermann,” Grachos says. “It’s colorful, animated, and well made.”

And it could brighten your day. 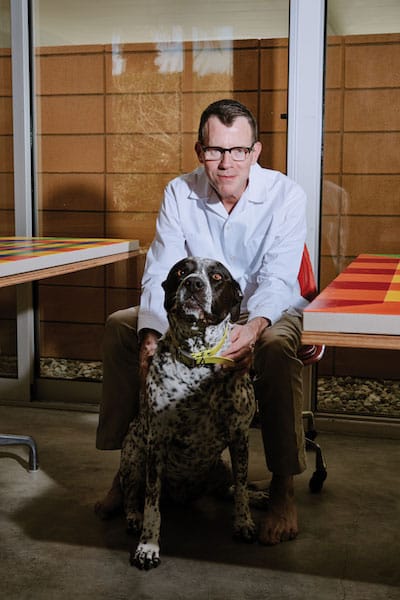