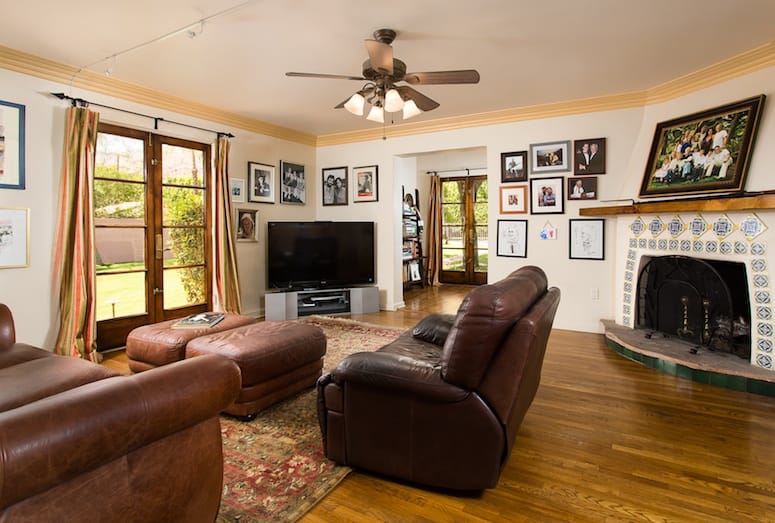 VIDEO: Hear from Joel Douglas on the history of his father, Kirk Douglas' pool table.

Just like a story taken from the script of a true Hollywood romance, the first time movie producer Joel Douglas saw this house 222 W. Chino Drive in the Old Las Palmas neighborhood of Palm Springs, it was love at first sight.

Douglas purchased the home in 2003 after driving by and having an immediate visceral reaction. “I had seen the house from the outside and it got to me,” he says. “It certainly wasn’t in the shape it is now, but something about it—it had a real spirit.”

“My wife thought I was absolutely crazy undertaking a place that was probably going to be tremendous to try and get into shape,” he adds. “But I just loved it. And then, of course, I found out after I came here that it was Carole Lombard and Clark Gable’s last residence. And Sammy Davis rented it at one time, [so] it has quite an illustrious past all the way back to 1925. It’s part of a very strong heritage of what this village was,” says Douglas.

Douglas oversaw an extensive amount of work on the exterior and interior of the home — including a new roof, new wiring and pipes, and the addition of guest bathrooms. “Even things like these doors here [in the living room] had 11 coats of paint on them all the way back to 1925 and they had never been touched,” says Douglas.

Although he loves the house, the death of his wife last year has led Douglas to the difficult decision that it’s time to sell. “That was really the driving force for me,” he says. “It’s silly for a house like this not to be used. It needs a couple who want to entertain, really utilize it.”

And whoever purchases the home will be off to a good start since it’s being sold fully furnished.

“A house like this, I really don’t feel like you ever truly own,” he says. “You’re a custodian of it for a period of time and you have a responsibility to keep it much as it was, and in as good shape as you can.”

LIVING ROOM: Like the doors in the living room, the vaulted ceiling had been painted. Joel Douglas had it brought back to the natural wood. DINING ROOM: “The thing that’s amazing about this place is that the moulding is all original and it’s fabulous,” says Joel Douglas. He and his wife purchased the dining table—which is actually two church doors put together—for the home. The room also features thick plaster walls. “It’s a one of a kind and hopefully people will keep it like this,” adds Douglas. POOL TABLE: The original layout of the home was more ranch style and this room was open to the exterior. The custom-made pool table was designed by Harold Adler for Douglas’ father, the Academy Award-winning actor Kirk Douglas, and has the original Adler plaque dedicated to Kirk Douglas. “And it has Kirk’s cue too,” says Joel Douglas. KITCHEN: Joel Douglas and his wife raised the roof in the kitchen, which retains its original tile work on the counters and backsplash. POOL AREA: The pool was originally at the front of house, but was moved to the back at some point. Joel Douglas thinks Clark Gable and Carole Lombard might have made the change. There’s a summer kitchen at the far end, as well as something that reflects the very 1920s/1930s era of the home — his and her dressing rooms with a bathroom in between them.