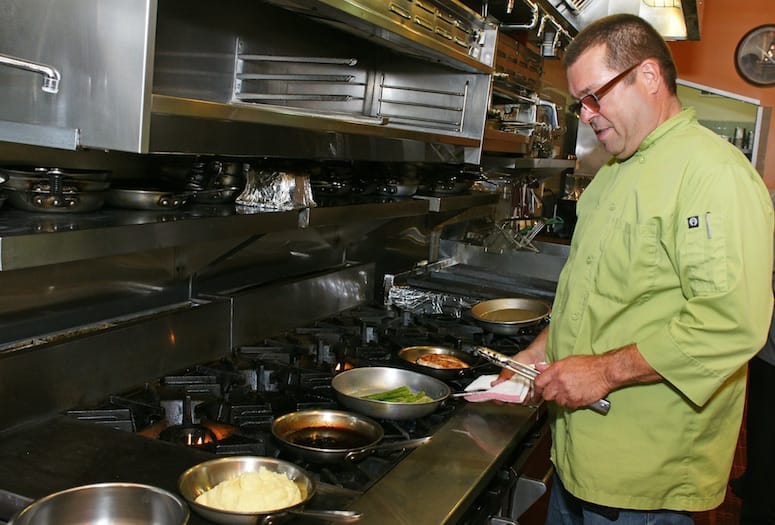 Johannes is marking his 20th year in Palm Springs by challenging his customers to try each of the 20 schnitzels they are temporarily adding to the menu. Try all 20, and you’ll get a bonus schnitzel.
PHOTOGRAPHS COURTESY JOHANNES

Named one of the top culinary talents in the world by Best Chefs America magazine in 2013, Austrian chef Johannes Bacher actually began his career at age seven. “I was in my mom’s kitchen, some restaurants, and some neighbor kitchens,” he recounts. “And then at 11, I worked the summer in restaurants. At 14 I became an apprentice, then cooking school and apprenticeship at the same time.”

Classically trained in French cooking, Bacher worked all over Europe – London, Paris, Sweden – but transience grows tiring even for a young chef. In 1985, he went home to Austria and opened a 40,000-square-foot fitness studio in Vienna. Inside the venue, Bacher and his brother, Ewald, designed and built a restaurant. “We had a full-fledged bar, restaurant, including smoking,” he recalls. “Selling cigarettes, selling beer and wine ... in a fitness studio. It was the only one ever in Vienna. It's still around, still called the same name: Top Gym.”

• READ NEXT: Schnitzel fans know where to find the real-deal version in the desert.

A vacation in Los Angeles would put Bacher on course for a new adventure. He met fellow Austrian, Arnold Schwarzeneger, and the two-week vacation grew to six months as he catered film shoots on location. The money was good, but there were drawbacks. “You have to be [at the catering company] at 2 a.m., set up your truck, leave and be on location at 6 a.m., drive back in the middle of traffic, clean the truck, go home, sleep a couple of hours, and then go back.” So when luxury cruise line Seabourn made him an offer, Bacher climbed aboard.

“The first year was amazing — flying to those different cities and then getting pampered,” Bacher says. “Like, I had a butler at the [Mandarin] Oriental in Bangkok. It was just a cool experience.” After the second year, he was over it. Bacher was tired of getting stuck in airports because flights were canceled. “I was young and learned a lot, met a lot of great chefs from all over the world, including Hubert Keller from Fleur de Lys in San Francisco, and chefs from Australia and New Zealand, even Bernard Dervieux from Cuistot (in Palm Desert) was on the ship.”

Five years later, Bacher was done, swearing he’d never step foot on a ship again. Technically, he kept his word. It was a yacht. A 149-footer. “A friend of mine called and said he needed a chef for a private yacht for the owner of Fruit of the Loom.”

Bacher cooked for the Rockerfellers, the King and Queen of Thailand (to name-drop a few) but from a cooking standpoint, it was not creative. Lucrative, yes. But as Aristotle said, “Nature detests a void.”

“Ricky (the captain) was an avid eater and gourmet guy. We went out every night, and we just spent. It was a fun time — Monte Carlo especially. We stayed there for two months inside the harbor. It is not an inexpensive city.”
Bacher finally got sick of the sea and made land in Florida. He drove cross-country for a job in San Francisco thinking he would visit friends and check out American cities along the way. “I didn't like it anywhere,” he confesses. Not Houston, certainly not New Orleans.

“It stank. It was moist. It was raining. I stayed for one night, had some oysters and some beer, and left in the morning. It took me three days, and I was in Palm Springs and Palm Desert. I had friends that invited me, so I stayed with them for like two weeks. Met a girl, fell in love.” 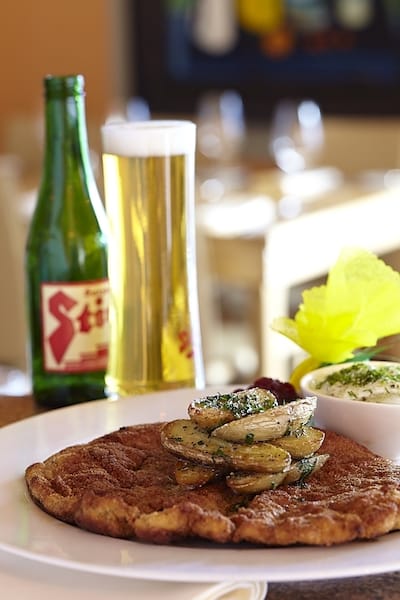 According to Johannes, "the classic wiener schnitzel is thinly pounded veal, breaded, and pan fried in clarified butter. Then, you add sauces."

But love would have to wait. Bacher had an obligation and continued on to San Francisco, working for restauraneur Hamdi Ugur, and then for a founding father of California cuisine, Jeremiah Tower. He eventually made his way back to Palm Springs where, in 1999, he built Johannes with his brother Ewald.

If you already did the math, you know this year is Johannes’ 20th anniversary. 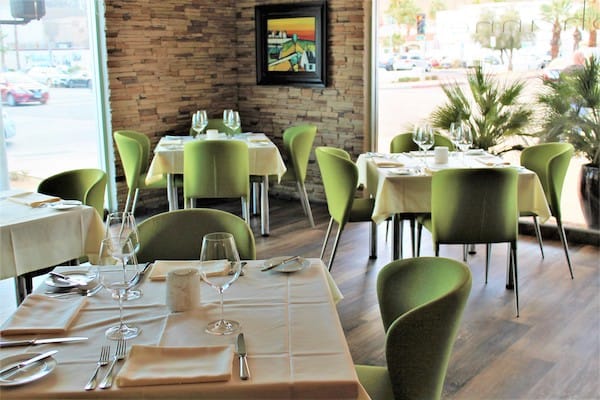 The main dining room at Johannes.

The Palm Springs Chamber of Commerce will perform a ribbon cutting to commemorate the milestone, and Johannes has cooked up a fun and unusual way of celebrating: They’re challenging their customers to try each of the 20 schnitzels they’re temporarily adding to the menu. Try all 20, and you’ll get a bonus schnitzel.

If you need a “schnitzel 101,” Bacher’s happy to explain. “The only thing schnitzel means is something pounded or something thin, so it could be beef, turkey, veal, pork, ichicken. In Austria, the classic wiener schnitzel is thinly pounded veal, breaded, and pan fried in clarified butter. Then, you add sauces.”

Using locally sourced ingredients, Johannes’ food is always fresh and imaginative; the decor sophisticated and funky. The bar is made from wine crates and natural wood. There are bistro tables, too. There isn’t a happy hour, but there is a “bar and schnitzel menu.” The bar schnitzel is about five ounces, a little less than half the regular schnitzel. At the bar, they also serve lamb, a shrimp curry, and some specials. A larger, more dynamic menu is offered in the dining room.

The European-farmhouse-meets-California stone and wood dining room decor has been refreshed with new paint and artwork; comfy, mid-mod green chairs; and tablecloths that dampen the clacks and clangs of tableware.

With all of his adventuring, Bucher has not only gained cred as a chef, but he’s got great stories to tell. He’s confident, wry, and sardonic but always has that twinkle in his eye, such as when he’s describing the artwork in the dining room. “Oh, this one is, his name is Couturier,” he says pointing at a colorful painting. “He’s French. He was a smoker and alcoholic. He died.” Couturier is dead? “Yeah, he’s a little bit dead.” 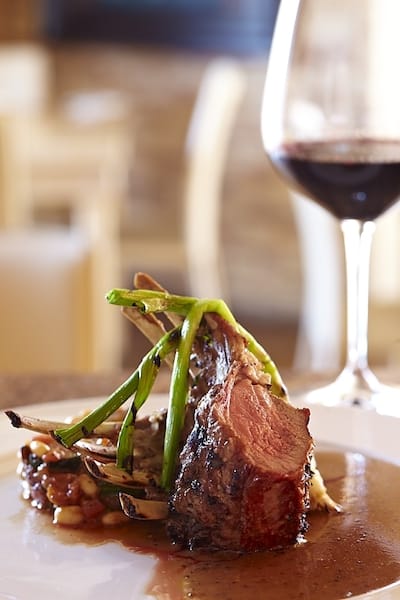 Because he’s well celebrated (he’s won awards and has been feted in Bon Appètit, Restaurant Writer’s Association, Wine Spectator, Alaskan Airlines, Elle Magazine, Out and About, Desert Entertainer, The New York Times, Zagat, Open Table, Travel and Leisure, The Desert Sun, Yelp, and Palm Springs Life) it’s not unusual to see celebrities at Johannes. Former and current guests include Roseanne Barr, Rod Stewart, Gary Oldman, Barry Manilow, and Suzanne Sommers. However, everyone gets the same treatment, unless, of course, you’re “a little bit dead.” Then, you’re on your own.

• READ NEXT: If you're going to Villagefest in Palm Springs, you gotta try a HeyDay burger.