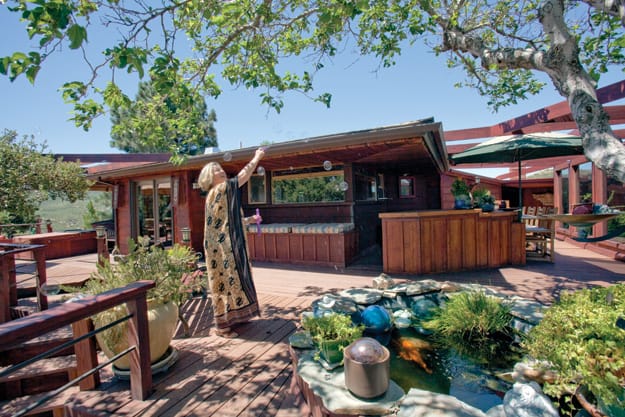 Beaumont police Chief Pat Smith and his wife, Glo, exhausted the real estate listings in Beaumont, Oak Glen, and Cherry Valley when they decided to check out “that other mountain”: The Highway 243 side of the San Gorgonio Pass, rarely traveled except by those en route to Idyllwild.

In 1992, they found a place 4,000 feet up the mountain with a 360-degree view. The house — made of wood, stone, concrete, and glass — had been vacant for two years and had grown into the hillside as if it were a brown mushroom. The roof leaked, rats roamed in the walls, and weeds grew right up to the front door. Glo likes to rescue houses, so they bought the place.

At the closing, they were handed a set of plans that said, “Architect: John Lautner, F.A.I.A.” Only then did it occur to the couple they might have purchased more than a routine fixer-upper. Lautner studied with Frank Lloyd Wright and was one of America’s greatest modernist architects. Known locally for his desert creations such as the Elrod House and the Desert Hot Springs Motel, he also designed the Pearlman mountain cabin in Idyllwild. But a house above Banning? No one had heard of it.

Lautner experts contacted by Glo (then an accountant for an environmental testing lab) believed the house had been commissioned but never built. “If you wanted to hide an architectural gem, you’d hide it here,” Glo says. Indeed, Los Angeles interior designer Marco Wolff wanted to hide, in a way, when he commissioned the house in the 1960s. He lived in a Lautner house in Los Angeles; this would be his weekend escape, under the hulk of Black Mountain. He named it Windsong.

But inside the house, the sound of the San Gorgonio Pass wind ceases. The interior is all wood and silence. While Palm Springs modernism tends toward the stark, Windsong modernism is warm, organic, and almost maternal.

Lautner grew up in the wilds of northern Michigan and loved dramatic landscapes and big vistas, so he must have found the site especially enthralling, propped as it is on the edge of a great divide with all of Southern California’s freight and commerce rushing below. When the light is right, you catch a flash off the fire lookout high on Black Mountain.

The main room of the 2,200-square-foot residence is open, with a cathedral beamed ceiling, built-in coffee table, and matching fireplace of Bouquet Canyon stone. The music room built for Wolff’s baby grand is now an office. For more space, the Smiths converted the carport to a master bedroom, hunkered into the hill like a Hobbit’s boudoir.

A distinctive Lautner feature is the 6-foot-deep soffit that reaches outward, giving the space a framed and protected feeling. (The inner soffits are missing because Pat, who is 6 foot 1 inch tall, kept banging his head.) In Wolff’s description, the property was meant to be “a fortress against the ever-changing pressures of weather patterns … the antithesis of urban living.”

The house proved itself a true fortress in 2006, when the Esperanza fire blazed through the Smiths’ neighborhood. The fire killed five firefighters and obliterated 22 homes on the street. When the couple evacuated, Glo assumed they wouldn’t be returning. ”I was pretty sure we’d lost it,” she says.

But then a fellow evacuee phoned. She was sitting outside Windsong and wanted to know if she could go inside and raid the refrigerator. Glo says the hiking trails she cleared around the property were the unintentional firebreak that saved the house.

Glo has filled the 11-acre grounds with kaleidoscopes, bubble wands, and wind chimes. She gets around the property on the Glomobile, a Kawasaki mini-tractor retired from the railroad.  The grounds are lush with avocado, lemon, peach, olive, fig, and apple trees, as well as grapevines, blackberry bushes, and roses. Glo’s favorite perch is the wraparound kitchen window, from which she has seen foxes, bobcat, and deer drinking from her koi pond.

For the Smiths, their time as caretakers of this architectural wonder is about to end. Pat retired from the police department in 2006. The couple bought a new place in New Mexico, and the ridge-top house is for sale.

In recent years, Lautner’s fame has grown. The Getty now houses his archives; and in 2008, the Hammer Museum at UCLA honored him with an exhibit: Between Heaven and Earth: The Architecture of John Lautner. Architects and fans from Amsterdam, Canada, and elsewhere increasingly find their way to Windsong. The 100th anniversary of Lautner’s birth this year (he died in 1994) is bringing even more traffic. Twenty years after the Smiths found the rundown mushroom house, this Lautner is lost no longer.