There was a time when the Davis Cup of tennis was a huge deal, big enough to create headlines, stars, and controversy. One such time was the 1978 final, which, to the chagrin of the international tennis world and the elitist East Coast tennis press, was held at Mission Hills Country Club in Rancho Mirage.

The late sportswriter Frank Deford penned from the pulpit of The New York Times: “The Cup matches … were marred only because the United States Tennis Association had turned the great bowl into a rich man’s trinket, scheduling it at a desert oasis named Rancho Mirage, which is located somewhere in the great state of Southern Condominium.”

Tommy Tucker was then an assistant tennis director under International Tennis Hall of Fame player Dennis Ralston. Now, Tucker, at 85 years old, is tennis pro emeritus at Mission Hills, where he has been for 44 years. He still gets on the court a few hours a day to teach. He has fond memories of that December weekend, especially because he was in the middle of making it happen.

“Dennis and I and guys like Charlie Pasarell started watching the progress of the Davis Cup early that year, as they went from quarterfinals to semifinals,” Tucker says. “We knew the finals would be in December, that if the USTA wanted them to be outside, they’d have very few places to choose from because of weather. The tennis establishment always wanted big Davis Cup events to be at places like Merion [in Pennsylvania] or Longwood Cricket Club [in Massachusetts].

“But we thought we had a chance because, if the U.S. beat Sweden in the semifinals and Britain beat Australia in the other one, the USTA would have the choice of the home court, and we had weather and fast hard courts to sell.” 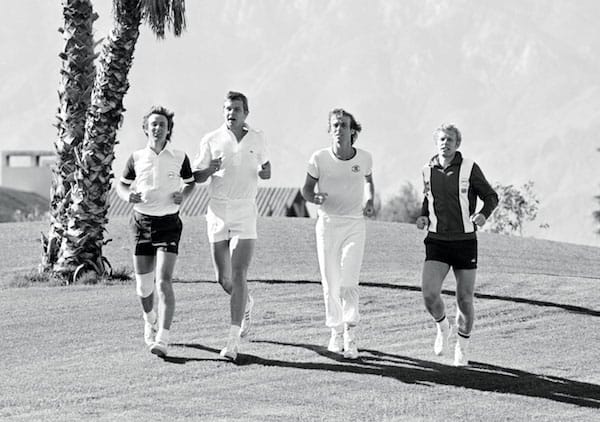 They also had something else: deep pockets. At that time, Colgate owned Mission Hills. Its chief executive was David Foster, also the Mission Hills president, was beginning to involve his company in the sports world. That’s how the Dinah Shore golf tournament came to pass at Mission Hills. Foster quickly said yes to the Davis Cup idea and two other officials from flooring manufacturer Congoleum, Eddie Nicholson and Byron Radacher, part-time desert residents, joined the project. Congoleum became the first-ever Davis Cup final sponsor. The USTA, never known then or now to pass on a dangling dollar bill, nodded as Mission Hills went to the bank.

It all had fallen in place for Ralston, Tucker, the desert tennis community, and Mission Hills. The United States defeated a Swedish team that featured Bjorn Borg, who won both of his team’s points, and the Brits took out the traditionally Davis Cup-tough Aussies by handling Tony Roche and John Alexander. Both match scores were 3-2.

The finals match — or tie, as it is called in Davis Cup — was scheduled for Dec. 8–10. It was the first time in 78 years — and 67 final matches, some years lost to wars — that a Davis Cup final had been held west of Cleveland. The United States hadn’t been in a Davis Cup final since 1973. Its program had stuttered, losing in that time frame to Colombia, Argentina, and Mexico twice. Now, captain Tony Trabert had them back in contention. 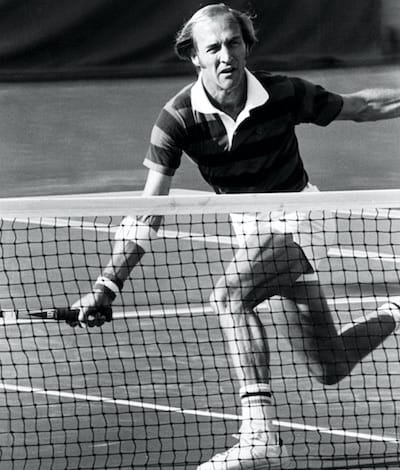 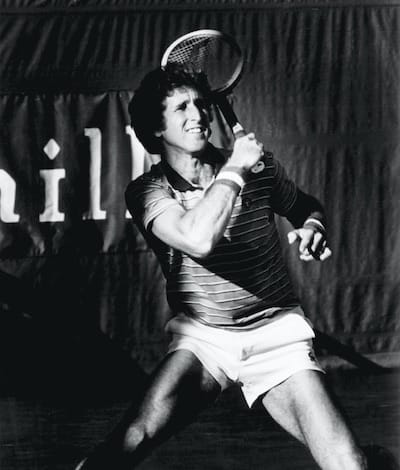 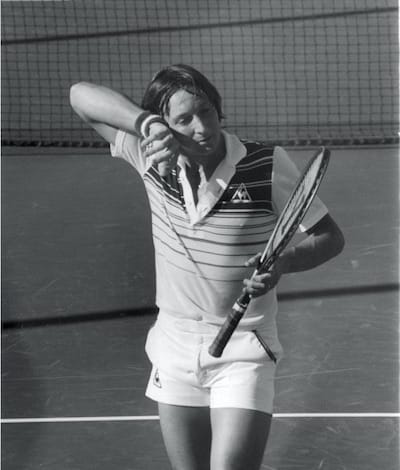 As for the Brits, they were nationalistically giddy, as they tend to be with sports successes. They hadn’t been in a final since 1936, when Fred Perry led them to their fourth straight title. Perry would watch from courtside at Mission Hills, along with many of the greatest names in tennis history, invited with all expenses paid by Mission Hills and Congoleum. With Perry were Ellsworth Vines, Don Budge, Bobby Riggs, Jack Kramer, and Pancho Gonzales.

Tennis had been in the news for more than the controversial choice of Mission Hills for the final venue, and for more than a gathering of legendary players in one spot.

In an earlier match en route to the final, the U.S. team had beaten a team from South Africa. The match was played at Vanderbilt University in Nashville, Tennessee, and thousands marched to protest the racist apartheid policies of South Africa. Protesters questioned why South Africa would even be allowed to play in a Davis Cup and, because they were, why wasn’t the United States pulling its team out? Bodyguards accompanied the U.S. players to matches.

The South Africans tried to mitigate the circumstances by adding a black South African player to its Davis Cup roster who was on the Vanderbilt tennis team. His name was Peter Lamb. He neither left the bench during the Davis Cup tie with the United States nor rose higher than No. 440 in the world after he turned pro. The protesters saw Lamb’s inclusion on the team for the empty gesture it was, and so did a prominent member of the South African team, Ray Moore.

Several weeks before the U.S. match, Moore withdrew from the team in his own apartheid protest and eventually became one of the Palm Springs area’s most important sports figures, partnering with Pasarell in conceiving and building what has become today’s BNP Paribas Open at Indian Wells — the fifth most prestigious tennis tournament in the world.

Each Davis Cup team generated its own storylines and headlines. Charismatic John Lloyd and controversial Buster Mottram led the Brits. Mottram had been in and out of the good graces of his team all year. He argued with Lloyd and Lloyd’s brother, David, who was also a member of the team. He also was an admitted member of something called the National Front, a group allegedly connected to a white supremacy movement in Great Britain. At several Davis Cup matches, people carried signs that said: “Buster Mottram is a Nazi.”

Tucker says, “We knew all that, but we also knew that he was the kind of player you did not want to see across from you on a draw sheet.” 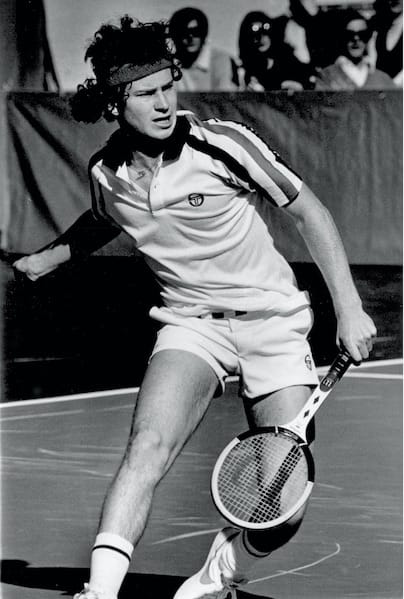 John McEnroe deployed a twisting lefthanded serve to move Buster Mottram off the court and land his first volley for a winner.

The biggest headline of all was the emergence of a flashy young American player, a quirky left-hander with a red headband who had already made it to two U.S. Open semifinals, would be making his Davis Cup debut in a final — a rare situation — and was only 19 years old. His name was John McEnroe, and the speculation was that, as good as he was, this would be too big a stage.

In the first match, early afternoon, Dec. 8, 1978, McEnroe took on Britain’s No. 1, John Lloyd. Lloyd was a top 10 player who had recently began a romance with U.S. star Chris Evert, who spent time at Mission Hills polishing her game, including lessons from Tucker, and was there to watch the Davis Cup. New York Times writer Neil Amdur couldn’t resist: He wrote that Evert had to ponder “love of country or love of man.”

McEnroe started with an ace and wiped out Lloyd, 6-1, 6-2, 6-2. Lloyd said afterward, “No one had ever made me look like that much of an idiot before. I saw shots I didn’t think could be made by another human being.”

After the veteran doubles team of Stan Smith and Bob Lutz — who were playing for the University of Southern California when McEnroe was in the fifth grade — won the doubles match the next day in straight sets, McEnroe ran through Mottram for the decisive point on the closing Sunday. The score was 6-2, 6-2, 6-1 and the eventual final team score was 4-1 to the United States. In his first outing, McEnroe had broken a Davis Cup finals record that covered 67 years of matches by losing only 10 games total.

But Mottram’s loss to McEnroe will never negate the highlight reel he provided on opening day, in the No. 2 singles against Brian Gottfried. Down two sets and a service break, he rallied to win the third set and then took the final two for Britain’s only point. That match, as much as McEnroe’s dominance, share the legend of that Mission Hills Davis Cup final. 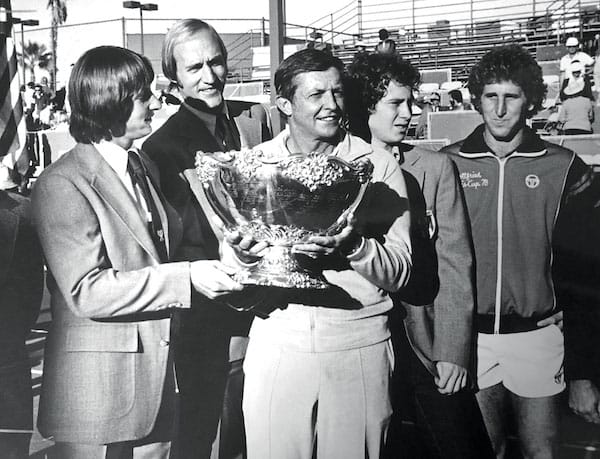 The grand irony was that the site chosen, at least partly for its impeccable weather, had become an ice box.

“It was bone-chilling,” Lloyd said.

Allen Jewell of BBC Sport wrote, “Mottram started his comeback as the sun dipped behind the Coachella Valley mountains and the temperature dropped to near freezing. Late into the night, only 300 shivering spectators were left, but Mottram was greeted with: ‘For He’s a Jolly Good Fellow’ by British fans.”

Deford’s story said that, at the end of the Mottram–Gottfried match, “It was more like a junior-varsity football game, with only girlfriends and parents in attendance.”

The next Sports Illustrated cover featured McEnroe in red headband. The Mottram comeback match was discussed and written about with such great fascination and hyperbole that it shares with McEnroe the legend of the 1978 Davis Cup. 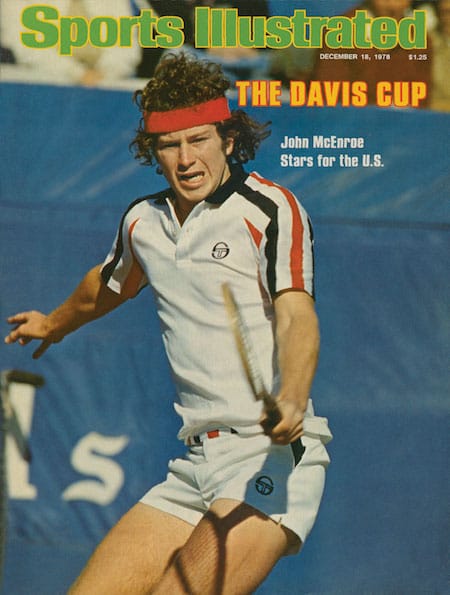 The U.S. Davis Cup team won again in 1979, this time in San Francisco. Tennis was sizzling, and Mission Hills Country Club had helped light the fuse.