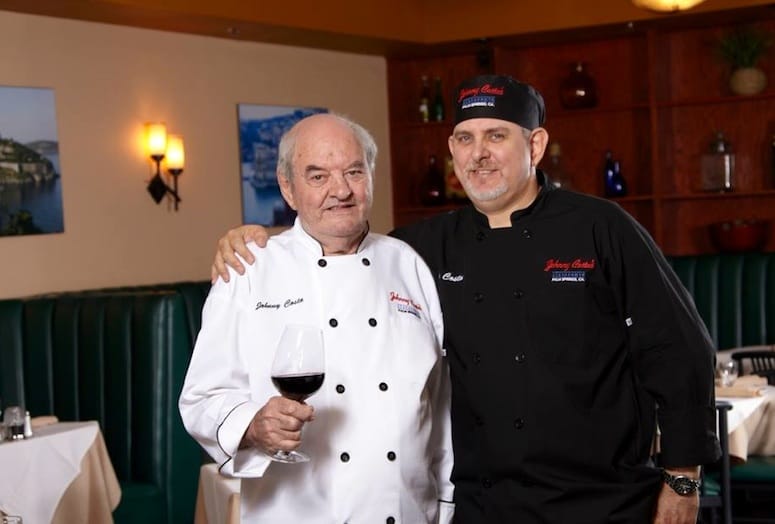 The mark of Frank Sinatra and the Rat Pack generation of Hollywood celebrities can be found all over the menu at Johnny Costa’s.

From Sinatra’s top request, Linguine Clams, to a nod to the famous crooner’s proclivity for steak with peppers, Steak Sinatra. Even his preferred drink, whiskey, is given special attention with Chairman of the Board, a pour on the rocks of Jack Daniel’s bottling of Sinatra Select ™ whiskey. Whiskey on the rocks was the sip of choice that earned the label of Sinatra Select ™. Customers at Johnny Costa’s can hear the cubes in their own glass make a bit of music as they raise a toast to the ‘Chairman of the Board.’

The relationship between Johnny and Sinatra began in Hollywood, where Johnny was hired as Sous Chef at the Hollywood celebrity hang out, Villa Capri. He was introduced to Sinatra and learned to cook his favorite dishes, among them, Linguine Clams. “Frank’s Version” includes a lighter touch on garlic, where a whole clove is sautéed into olive oil and then removed, creating a more nuanced flavor. The connection between Sinatra and Johnny continued in Palm Springs when Johnny went to work at the club where Frank performed. Among the favorite stories Johnny likes to tell is of receiving a call from the rattled staff at Club Trinidad in Palm Springs after he had left.

Sinatra “sent his Clams Linguine back” to the kitchen by hurling it against the wall. When Sinatra’s bodyguard, Jilly Rizzo, went to the kitchen to investigate what the problem with Sinatra’s favored preparation was, he discovered Johnny had left. Steak Sinatra with peppers — a request by Frank himself.

An invitation to cook at the Sinatra Estate soon followed, and not long after Johnny opened up Johnny Costa’s Ristorante at its original location in Desert Hot Springs, circa 1976.

After moving to Cathedral City, the current location was established in Palm Springs. January 2016 marks 40 years in the Coachella Valley.

Johnny Costa’s has gained attention due to Johnny’s connection to Sinatra, and other famous Hollywood celebrities, such as Bob Hope, Steve McQueen, Lucille Ball and more recently, Leonardo Di Caprio.

For a taste of the past being served to this day, a visit to Palm Springs is certainly worth a visit to Johnny Costa’s Ristorante. Watch for special ways to share in the celebration of 40 years with the ringing in of 2016.