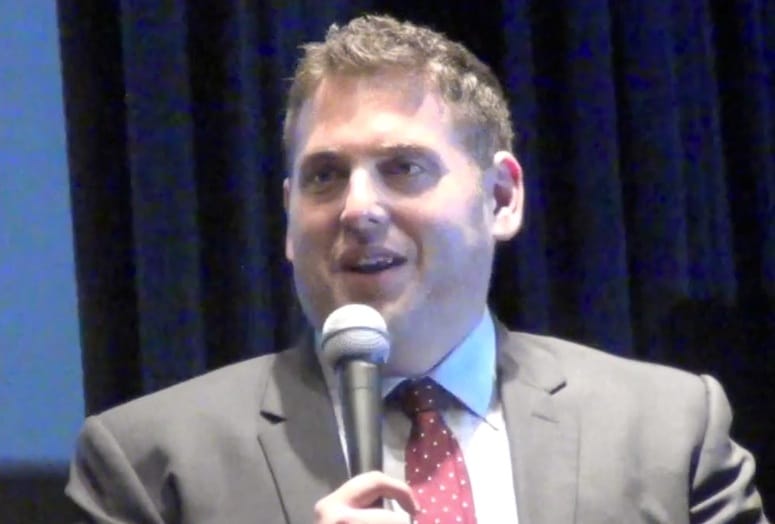 That white stuff Jonah Hill was snorting during the filming of “The Wolf of Wall Street”?

It was vitamin B.

But over the six-month shooting schedule, Hill came down with bronchitis for more than a month.

“All day, for six months, you’re just snorting that powder, but that much matter in your lungs is not good for you,” Hill said during a Q&A session Jan. 5 following a screening of the movie at Cinemas Palm d’Or.

Actor Bryan Cranston, who is part owner of the Palm Desert theater, moderated the Q&A.

Hill was in town to accept the Creative Impact Award for acting from Variety as part of a Palm Springs International Film Festival event Jan. 5 at the Parker Palm Springs.

In the movie directed by Martin Scorsese, Hill plays Donnie Azoff, a mostly fictitious character who was a composite of those closest to Jordan Belfort, played by Leonardo DiCaprio. The fact-based movie shows Belfort’s dramatic rise to stardom on Wall Street by swindling people out of their life savings, living the extravagant lifestyle while breaking every rule in the book.

Drugs are just part of the excess portrayed in the film, particularly Quaaludes, which Hill said he couldn’t ask contemporaries about its effects.

“Quaaludes is before my generation,” he said. “They told me you lose your motor skills and your finger feels like it could weigh 10 pounds. But every single person I asked said, ‘God damn they were fun’. They seemed so upset they were not in existence anymore.”

Here are a few more interesting anecdotes from Hill.

The movie looks physically challenging. How did you handle that?
“I got punched in the face for real. The guy who plays Brad (Jon Bernthal). We’re shooting that scene on the roof where I’m telling him he’s just a pill dealer and I’m the reason we have all this money, and he goes to hit me in the face. We did it a few times, and (director Martin) Scorsese says, ‘It doesn’t look good, doesn’t look good’. So we’re talking about it and Scorsese says, ‘Kid, do you want to try it where he hits you for real?’ I was just quiet. I was hoping someone would jump in and say something. So I look to Leo, like help me out, and Leo just looks away. I go, ‘Yeah, let’s do it’. And Jon is pacing more and more to work himself up, and he’s really buff. We do the scene and he hits me, and my fake teeth split and flew out of my mouth. The whole take is the one they used.”

The scene between Leonardo Dicaprio and Matthew McConaughey pounding their chests and chanting. Where did that come from?
“That is actually the way Matthew warms up for a scene. So we’re watching him do this and they keep the cameras rolling.”

You had to audition for this role, correct?
“It was not offered to me. Martin Scorsese is my favorite filmmaker or artist of any medium. Good Fellas is the reason I wanted to make movie in the first place. The first phone call I got after being nominated for an Oscar for “Moneyball” was from Ellen Lewis, Scorsese’s casting director. I had not been on an audition in six years. I would have been terrified to audition for anyone let alone Martin Scorsese. I was going to show him what I was going to do with the role. I practiced for like two months and I was terrified. It was like 100 degrees in his office in Newark, and it was Scorsese and Ellen Lewis. And there was a ladder going up to the roof, and I realized the air conditioning was busted in the building, so I started sweating because I was so nervous and it was so hot.” “I went into the bathroom and told myself, ‘Get it together, get it together, you’re gonna blow it’, and I came out and asked if there was anywhere else we could do this. And Scorsese was like, ‘You’re right, it’s hot, let’s get out of here’. We talked for about two hours. And I walked back to where I was staying in New York and I thought that was the coolest experience of my life, and if nothing comes of it, I’m the luckiest guy for talking to Scorsese.”

What did you think of the character?
“That’s not my personal idea of fun. The thing I hated the most about Donny is that he didn’t treat people nicely. He was mean to people. It’s so ugly. On the drive home every night, I would feel so guilty of the things I had done – speaking badly of people, treat women badly, only cared about money.”

Was working for Martin Scorsese intimidating because you have such respect for his work?
“There could not be a situation that I could ever walked into in my life where I would be more intimidated than this. What I know about myself, I work better when I feel that everyone else there is better than I am. It forces you to elevate and learn as you go along. The first day, I was so nervous, I was doing this Long Island accent for Donnie but I hadn’t been doing this really raspy voice. I hadn’t shown it to anyone. I really what to do this voice, I think it will be great for Donny, but I hadn’t shown it to Scorsese. Spike Jonze was there (Spike was in Moneyball). So I ask Spike if I can show him this voice? I did the voice, and he says, ‘Oh definitely, do that voice’. So on the first take, I just did it and Scorsese never said anything. Four months in, on one take, when Leo first meets me, Scorsese says, ‘That’s a little too raspy’, but before then he had never mentioned it.

What is Jordan Belfort like?
“Jordan was the biggest asset that I ever had on a film. How rarely do you play a character where you can call them, literally between takes and ask, ‘So when this was going down, what was it like?’ He is the most open person I have ever met. He did not withhold any truth to his past no matter how ugly it was. I never had anything like that. Leo and I would go to dinner with him and ask him questions. He brings you in. He’s a salesman. You’re sitting there at dinner with him and you’re thinking, ‘This is the most entertaining guy I’ve ever met in my life.’ He tells a story and everyone is listening.”