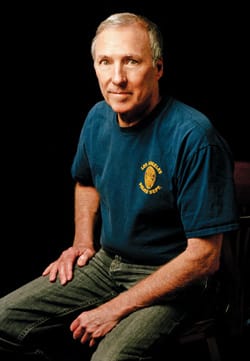 Rancho Mirage Public Library buzzes with activity in the middle of the afternoon, nearly every seat in the library’s auditorium filled. Many of the men, irrespective of age, have the same close-cropped hair, lean and sinewy bodies, and darting eyes that seem to continuously check the crowd for movements. Snippets of conversation can be overheard:

“You know what I always liked best? He got how we talk, right?”

A rudimentary count turns up nearly two dozen current or former police officers, some on vacation, some on their day off, some who drove in from the Inland Empire, some who have two hours before they’re due to report for duty but didn’t want to miss a chance to meet the man who, for more than 30 years, has been their chief chronicler: former police sergeant-turned-author Joseph Wambaugh.

When Wambaugh appears in the back of the room a few minutes before taking the stage, those same close-cropped heads whip around and take measure of the man. The years have been kind to Wambaugh, whose own hair is still short and crisp; whose own body still looks lean and quick enough to chase a perp down an alley; and who still carries with him the gait of authority, so much so that when he eventually takes the stage and stands behind the podium, it feels like we’re about to be briefed on the details of a murder. The “men in blue” have settled in, some with pencils at the ready for notes.

It’s the very thing, it turns out, that drove Wambaugh out of police work. “I couldn’t deal with the deference,” he says. A few hours before the library event, Wambaugh was sitting in his home office in the foothills above Rancho Mirage, where he has lived part time for more than 20 years. A toy police car catches the eye from the shelf behind him, and piano music drifts throughout the home.

This a long way from the streets of Los Angeles and the life of a beat cop — a life Wambaugh admits he misses, but that became untenable after the success of his writing turned him from a cop who wrote into a writer who happened to be a cop.

“The guys showing deference to me was pretty unbearable,” he says. “If they’d shown more resentment or jealousy, it would have been easier to deal with, but they didn’t. They were sweet. They held open doors for me. And that was worse.”

It’s been 36 years since a brash, young LAPD sergeant named Joseph Wambaugh splashed on the scene with The New Centurions. The searing crime novel was a harbinger of things to come, both in literature and on television, as the lives of police officers became as important and emotional as the crimes they hoped to solve. Gone was the surreal image of a super cop like Joe Friday, replaced by men with interior lives burgeoning with personal conflicts.

By 1973, Wambaugh was already a certifiable star, but it was his classic account of the tragic kidnapping and murder of LAPD Officer Ian James Campbell, The Onion Field, that made him a household name.

“After The Onion Field, it was disruptive,” the author says. “You’d be amazed how many calls came into the Hollenbeck detectives for me that were not legitimate.” He laughs. “They’d say, ‘I think we’ve had a burglary. … Could you send Sgt. Wambaugh?’”

The LAPD’s loss was literature’s gain. Since leaving the force, Wambaugh has published 14 more books: 10 novels and four true-crime works, including Hollywood Station, which came out in late 2006. It had been a decade since Wambaugh’s last novel — a lifetime in the crime genre. If he had been forgotten by fans (and critics) in favor of T. Jefferson Parker or Michael Connelly, it would have been understandable, if not lamentable. Instead, Hollywood Station bowed to glowing reviews and sterling sales. Los Angeles Times called it “a deeply felt paean to those who protect and serve under the most trying conditions” and referred to Wambaugh as “one veteran of the LAPD crime scene who can still run with the best of them.” The New York Times simply called it “exhilarating,” while Las Vegas City Life might have encapsulated it best: “Hollywood Station is a glorious return to form by Wambaugh and should sound a clarion to other writers of police procedurals that the king has returned, dressed sharply in police blues.”

But it took another crime writer, James Ellroy (LA Confidential), to convince Wambaugh to return to the form that first earned him his authorial stripes. “I felt written out with novels,” Wambaugh admits, “but James Ellroy kept trying to convince me to write the ’06 version of an LAPD novel, because so much had changed. He thought I was the only one qualified to do it. So I thought, ‘Why can’t I go back and do the research like I would a nonfiction book?’”

One of the hallmarks of Wambaugh’s broad look into true crime has been his exhaustive (bordering on archaeological) digging into the lives of the people most affected by crime and, in the case of his most recent nonfiction work, 2002’s Fire Lover, the minds of the criminals themselves. For his return to fiction, Wambaugh went even deeper, speaking to 54 cops, including several Palm Springs officers, not only to hear the voices of those on the streets, but also to understand their logic, their fears, and their passions.

What this meant for Wambaugh, however, was reigniting that trust between cops so that the men and women he sought counsel from would open up. “What I found,” he says, “is that if they didn’t know me, their dads did, and that helped. Actually, more than one person I interviewed was the child of a cop I’d worked with or interviewed in the past. So the toughest thing wasn’t penetrating the police psyche of today. It’s the same as it was, probably, in 1906; but it was the technical things that were different. Particularly under the infamous consent decree, so much had changed, to the point that I had to keep asking, ‘Do you still do it this way?’”

The LAPD Wambaugh once chronicled has changed. The consent decree he speaks of, handed down by the U.S. Department of Justice, was put in place to combat the use of excessive force, false arrests, and illegal search-and-seizure incidents that rocked the department in the late 1990s. But the men and women he writes about have stayed consistent. The good guys are just as flawed and just as troubled as the crooks on the streets. So if his novels were turned inside out, it might be hard to figure out who the good guys are, who the bad guys are, and who is just trying to survive. It’s a skill set that has influenced innumerable crime writers, including Parker, widely hailed as one of the modern masters of the crime genre.

“I read The New Centurions in high school, and it’s one of the books that made me want to be a writer,” Parker says. “I reread it just a year or so ago, and it’s even better than I remembered. Wambaugh’s anticipation of Southern California race relations between Anglos and Latinos was prescient, but he’s also a terrifically unfettered storyteller in the sense that he makes his own structures rather than using the more standard ones that most writers build upon. He gets such wonderful tension out of the most seemingly routine scenes.”

Wambaugh’s eye for the drama of minutiae may sound unimportant until you hear the voices of his characters, feel the tension found in silence, and finish reading his work thinking you could probably walk the beat for a few hours armed only with what you learned on the novel’s pages. It might be dangerous work, but it is, Wambaugh says, the greatest job. “One of my characters in Hollywood Station, a character called the Oracle, calls police work ‘the greatest fun you’ll have in your lives.’ I absolutely believe that is true. Doing great police work is the greatest fun there is. Writing is work.”

Wambaugh is no stranger to accolades, having earned two prestigious Edgar Awards for his work and being named a Grand Master by Mystery Writers of America. Best-selling author Denise Hamilton believes his success is not merely a function of his creative skill, but of the experience he brings to each page. “There is a compelling honesty to the writing,” she says. “Wambaugh has walked the walk, has put his life on the line. I feel I know those cops and their burdens through reading Wambaugh’s literature verite.”

Looking back, however, Wambaugh says he was able to divide himself from his experiences in the field. So while he was able to write it, he wasn’t forced to relive it. “I just completely separated my private life from the horrible things I saw on the street,” he says. “I was able to say, ‘That’s not my tragedy,’ and just go on. Because you had to. You absolutely had to.”

At the Rancho Mirage Public Library, Wambaugh rattles off stories of crime fighting and crime writing, not so much making a speech as having a fireside chat. He tells of his first visit to Palm Springs, when he and his wife, Dee, spent the weekend at Truman Capote’s home. The young Wambaugh expressed to Capote his desire to write about the tragic events in that long-off onion field, but said he wasn’t quite sure how to go about it, only to be told by Capote a few key pointers gleaned from writing In Cold Blood. He tells of not arresting Lenny Bruce when he could have. He smiles and listens when ex-cops ask questions or make statements.

And, as he signs every last book and shakes every last hand, it’s clear that reviewers were right: The king has come back, though it would be safe to say he was never really gone. With super-producer David E. Kelly eyeing Hollywood Station for the small screen and a new novel (a sequel to Hollywood Station) nearly complete, it’s pleasing to note that Wambaugh wears the same suit of clothes.