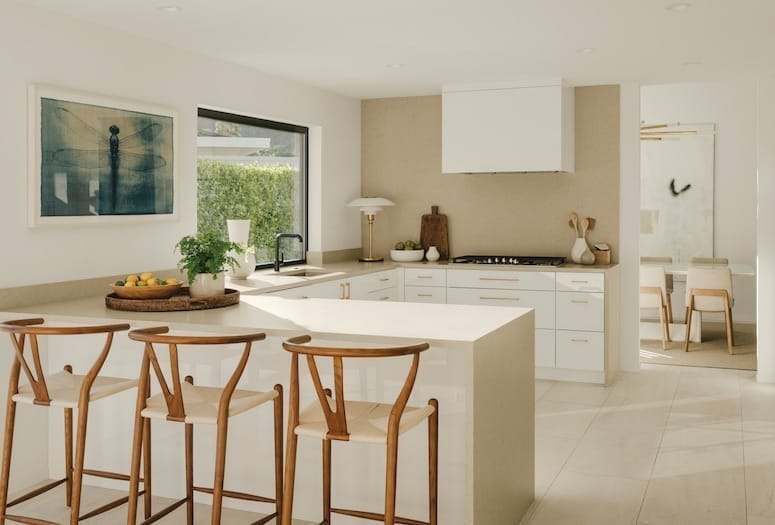 The calming and neutral agenda continues through the eat-in kitchen.
PHOTOGRAPHY BY LANCE GERBER

Instead of heeding the clarion call to heavily reference and reinterpret midcentury design in Palm Springs, Joshua Smith identified a different emotional and aesthetic need for his own desert home. “We wanted a palette cleanser, a place we can go to that’s a modern sanctuary,” the bicoastal interior designer says.

Smith and his husband, David Gerbitz, divide their time between the Southern California desert and New England, with frequent trips from their Vermont abode into New York City and the Hamptons for Smith’s client projects. They purchased the Indian Canyons property in the summer of 2019 and spent the first half of 2020 completing the renovation. 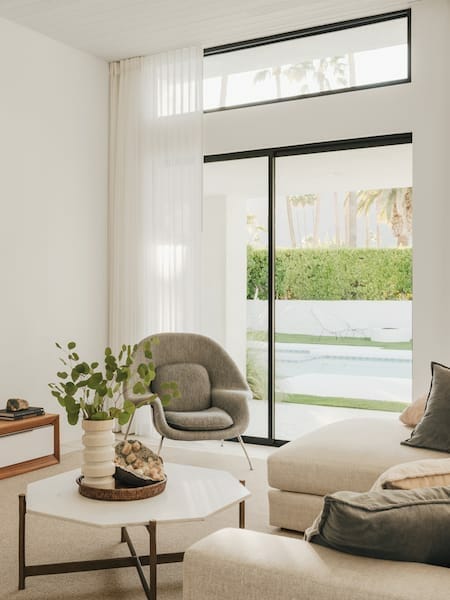 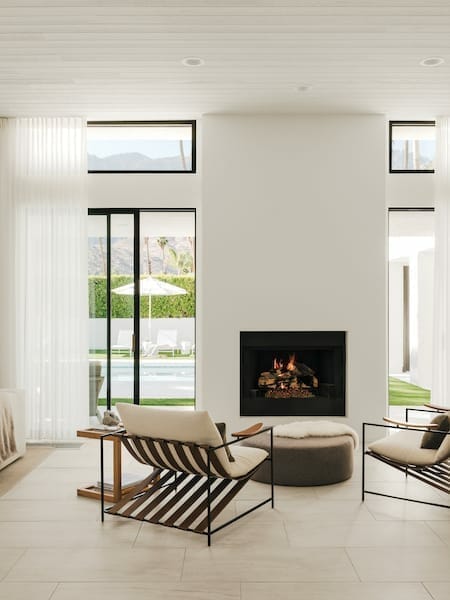 For his desert home, Smith sourced new and vintage pieces from both coasts and around the country, as well as in Palm Springs. The “sculptural” chairs in front of the minimalist fireplace are from Roberta Schilling in Miami and New York, a go-to resource for Smith. 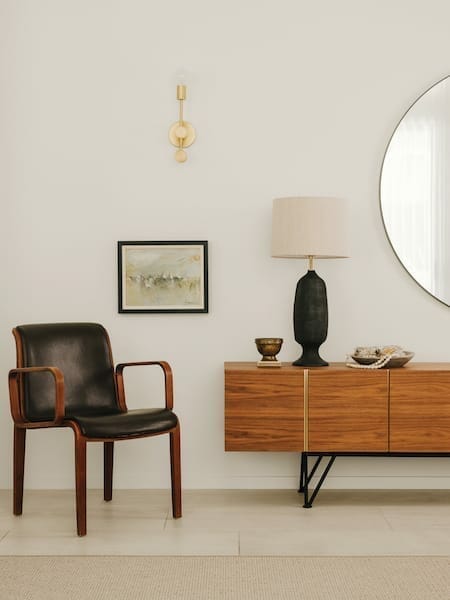 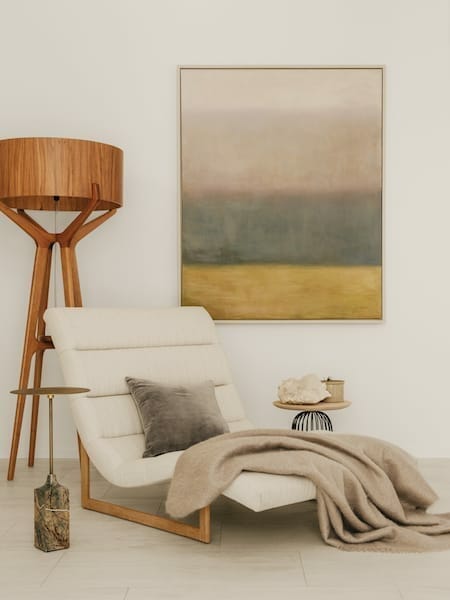 “We got almost a full year in, and yes, it was the pandemic, but it gave us an opportunity to connect and explore,” Smith says about the surreally timed move and endeavor.

The relatively young provenance of the structure gave Smith, who is originally from Texas, a degree of creative freedom. What he describes as a “Stan Sackley-inspired” three-bedroom house was built in the 1990s, making it somewhat of a contemporary tabula rasa.

“The style of the house will dictate. The architecture will tell you what it wants to be,” he observes. While the footprint remained the same, Smith and Gerbitz opted to remove the wall between the living room and what had been a study. The wet bar in the dining room was also replaced with glass “so the house is always flooded with this ethereal light,” Smith says. “For us, light is everything.” 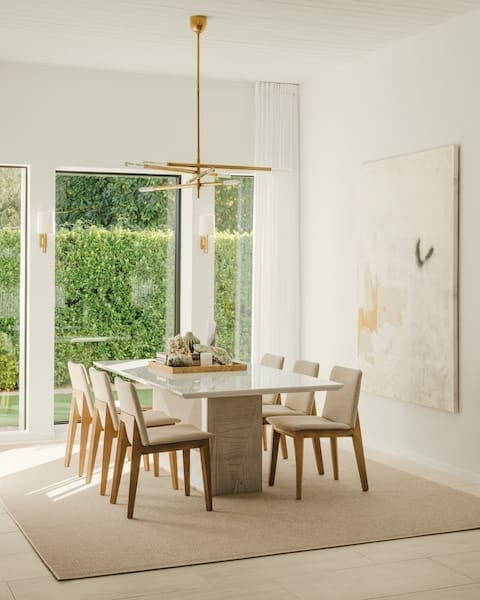 Smith and his husband, David Gerbitz, removed the wet bar and added more glass “so the house is always flooded with this ethereal light.”
In taking the minimal road less traveled to transform his home, the interiors became an exercise in exploring tone and neutral warmth. “It’s one thing to say you want color, but it’s another to live with color,” he opines. In all of his projects, he is concerned with the central question: “How do we design spaces that calm the nervous system?” So, he pushed the residence’s potential to feel “comfortable, relaxed, lived in, and muted.” 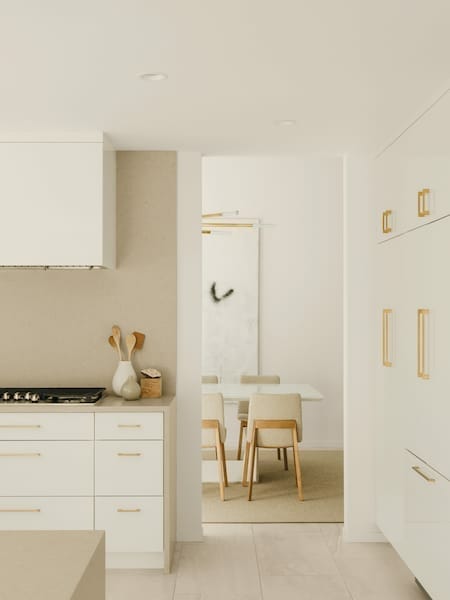 A mix of high and low, and vintage and new helps achieve that balance. Smith is passionate about supporting emerging artists, and sometimes his discoveries prove fruitful in other ways. A piece by East Coast painter Karen LeSage provided “the inspiration for the color palette,” Smith explains. “That was my starting place. Art is so personal.”

As his base, Smith coated the walls in Sherman Williams Bright White to  complement the West Coast sunlight and “let the artwork have their moments.” The chosen pieces lend “a warmth and a comfort, which is tricky to do when you’re doing an all-white, neutral space.”

The decision to pare back the fireplace surround and not clad the surface with stone also speaks to Smith’s overall approach. “I didn’t want one thing that stole the show,” he says. “Everything is in harmony with each other. There’s nothing that’s too busy,” whether it’s the ceramic table lamp by Danny Kaplan that Smith bought at Lawson Fenning in Los Angeles, a vintage sculpture of the bodhisattva Quan Yin he found at Baldo Creative at The Shops at Thirteen Forty Five, or even the Kelly Wearstler for Visual Comfort chandelier that adds a gentle glam touch to the dining room. 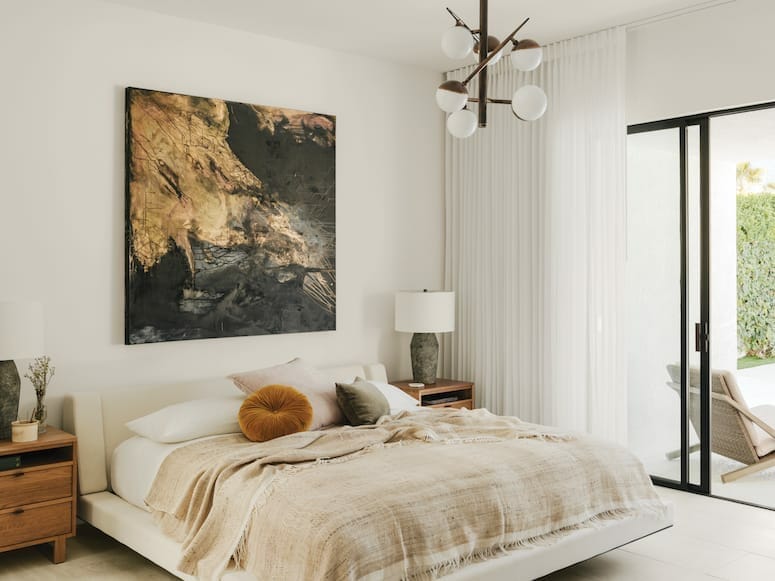 Smith describes the abstract painting in the primary bedroom by Houston-based artist Meribeth Privett as “moodier than the rest of the space,” and the textile on the bed is from Pat McGann Gallery in West Hollywood.
A restrained hand runs throughout. In the living room, Smith selected throw pillows that echo the blueish gray and green shades from the LeSage artwork, since these accessories “are  a noncommittal way to introduce color and change the feel and effect.” The painting composes a vignette with a chaise from homenature in New York and a wood floor lamp from the Brazilian maker Roberta Schilling that’s based in Miami and recently opened a new Manhattan showroom. (It’s among Smith’s favorite go-to brands.) The deep sofa itself is upholstered in chic yet extremely practical Perennials indoor/outdoor fabric. 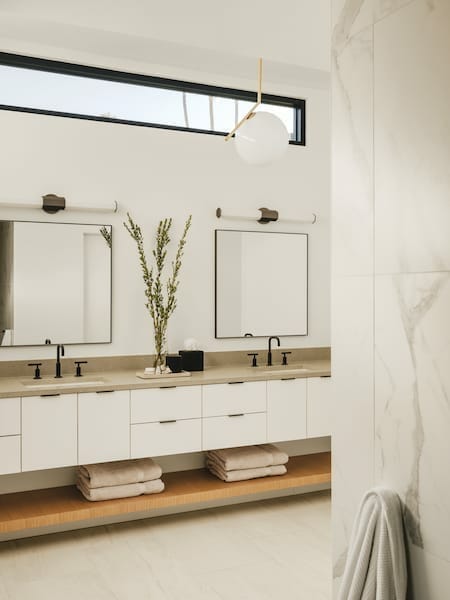 For most of the home’s bathroom vanity surfaces, Smith selected a honed Della Terra quartz from Arizona Tile. The primary bathroom vanity is in Concrete Grey. Fixtures are Kohler. 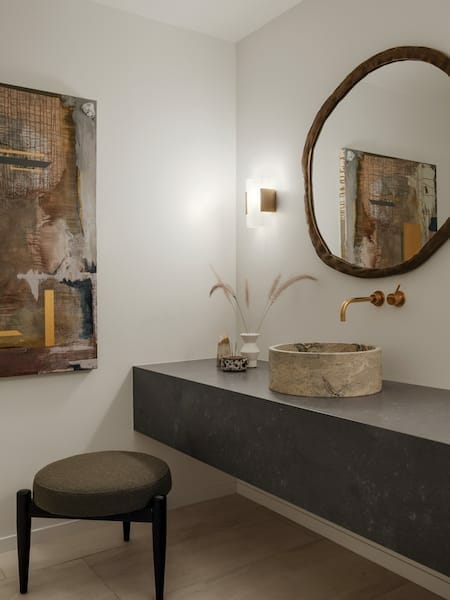 Another piece by Privett hangs in the powder room, which is an aesthetic departure from the rest of the home.

“Even though we’re living in this pristine place, nothing here is so precious you can’t relax,” he says. “The dogs can get on the sofa.”

In the primary bedroom, a black and metallic abstract painting by Houston-based artist Meribeth Privett provides “a beautiful stark contrast” to the overall sensibility on view. Another original piece by Privett hangs in the powder room, a space that’s somewhat of a departure in context. Here, Smith decided to “go a little darker and moodier — a place to do something a little more dramatic” with a stone countertop and textured vessel sink.

The kitchen and breakfast room, which was formerly a TV room, contain quiet but recognizable nods to midcentury design icons. Wishbone stools stand at the kitchen counter topped with Della Terra quartz from Arizona Tile, an understated surface treatment that clads the wall behind the cooktop stove, too. Casual meals and coffee breaks are enjoyed at the Saarinen Tulip table surrounded by Norman Cherner chairs illuminated by a contemporary Gubi multi-light pendant. 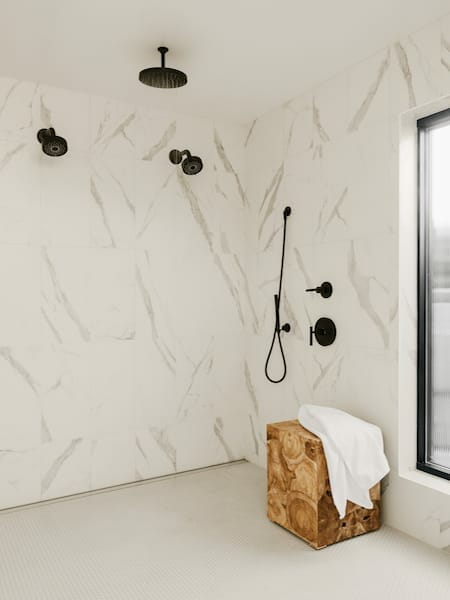 The shower walls feature a new favorite product for Smith: a digitally printed porcelain by Cancos Tile and Stone offering “the look of Calacatta marble without the headaches or staining.”

When the weather permits, Smith and Gerbitz prefer to cook in the new outdoor kitchen they added. And in classic desert style, the residents and their guests spend a lot time by the pool, which occupies what’s actually the front yard for a simple reason: That’s where the westerly mountain views are. “We cleaned up most of the curvy landscaping and clean-lined it to make it feel more fresh and low maintenance,” Smith says of the area.

“This home was the most contemporary I’ve done in terms of [it being] minimal and clean,” he notes. The purposeful use of less helped him carve out the “serene and modern sanctuary” he had envisioned.

No matter where they’re returning from, the couple always benefits from how the retreat fully expresses one of Smith’s key design philosophies: “Leave the room lighter than you found it.”