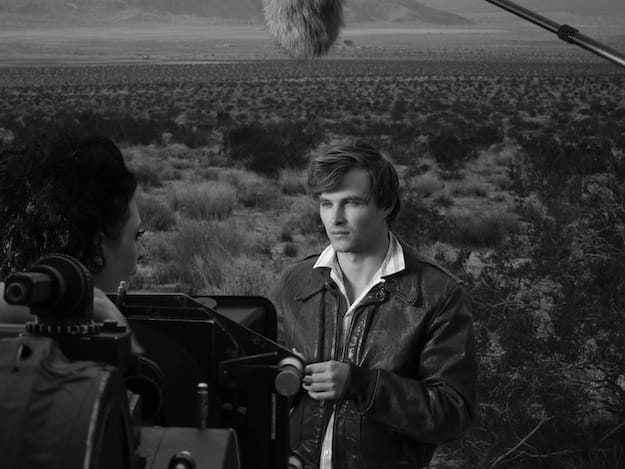 One of the co-stars in Matthew Mishory’s new film about James Dean is not an actor, but a place: Joshua Tree.

“We wanted the desert landscape to be a sort of character in the film, to set a mood and tone,” said writer/director Mishory about "Joshua Tree 1951: A Portrait of James Dean".

Starring James Preston as James Dean, the film is shot in black and white with stunning high noir imagery and captures a time in Dean’s life before he became a Hollywood icon. It screens twice during the final weekend of the Palm Springs International Film Festival – 7 p.m. Jan. 12 and 1 p.m. Jan. 13 at the Annenberg Theater.

Mishory and Edward Singletary, Jr., one of the producers and actors in the film, are expected to attend the screenings.

During pre-production research, Mishory learned Hollywood studio executives had sent Dean to the desert to tan before the "East of Eden" shoot. He liked the idea of making a James Dean film that was not set in New York, and not entirely in Hollywood either, but set partially in the desert. So he moved Dean’s desert trip up a few years and wrote his script with Los Angeles and desert locations.

“We went to the desert and were inspired to make the film,” said Mishory. “People often ask which parts of the film are factual and which parts are more fictionalized and it’s usually the opposite of what people think. The sequences in the city are almost entirely taken from the history and recollections of the people who knew him. The sequences in the desert become a symbolic and an emotional landscape.”

Searching for an isolated desert landscape, one of Mishory’s producers knew of the Zircon Circus ranch outside of Joshua Tree National Park. The compound had a series of small structures – a little house and garage – that were contemporary of the period.

Built in the 1940s, they already had the bones of a desert motel, so the production’s art department went in and nipped and tucked here and there to finish the transformation.

“We stayed on that ranch for the duration of the shoot in the desert and we shot at locations on the ranch and locations on unincorporated land that has incredible vistas,” said Mishory. “There’s one shot from a hillside where you can literally see for miles and miles and there’s nothing there but desert.”

For Mishory, the film screening at the Palm Springs International Film Festival is like coming full circle.

“It’s quite literally in our backyard of where we shot the film, and some of the crew was staying in Palm Springs as we were shooting the movie,” he said. “It’s kind of a homecoming for the film, so we’re very excited for these particular screenings.”

Mishory is already at work on his next project, a film called "Disappear Here". A political thriller, it’s a star vehicle for James Duke Mason, son of Belinda Carlisle, lead singer of the Go Gos and grandson of the great actor James Mason of "Lolita" fame and other Hollywood movies of the 1950s and 60s. Duke’s father, Morgan Mason, who produced "Sex, Lies and Videotape", came out of retirement to produce the film.