Actress Joyce Bulifant, who lives in Indian Wells, recently came out with a book, My Four Hollywood Husbands.
PHOTO BY STUART FUNK

Joyce Bulifant, known for her bright Southern lilt and roles in The Mary Tyler Moore Show, The Bill Cosby Show, and Tom, Dick and Mary, turns 80 next month. She’s busy packing up for a cross-country promotional tour for her memoir My Four Hollywood Husbands, a series of benefit concerts, and a range of philanthropic functions. Slow down? Those words aren’t in Bulifant’s vocabulary.

Her memoir reflects on her love story with fifth husband Roger Perry and includes anecdotes about Golden Era entertainment favorites like Fred Astaire, Helen Hayes, and Walt Disney. The book also delves into issues of codependency and alcoholism in relationships, and she hopes the story helps individuals in similar situations find courage to make a change.

Palm Springs Life spoke with Bulifant between appearances to chat about her story and life in Indian Wells. “It’s like getting undressed in public. I just put it all out there,” Bulifant says. “What’s the sense in writing something and making it all sweet and lovely? I think you have to get to the crux of it, to the pain.”

Palm Springs Life: What prompted you to document your story?

Joyce Bulifant: Well, everyone told me, “You have got to write your life.” So many people said it that I finally said, “Okay.”

I was separated from my third husband, in the mountains of Colorado with two of my children. I thought: What am I doing with my life now? Maybe now’s the time — since my feelings were pretty raw — to sit down with a yellow pad and make a pot of tea and start writing. I had my flannel nightie and my down comforter ’cause it was wintertime, and a cup of tea next to the bed, and I just started writing. It just poured out. That would be my first draft.

I’m very dyslexic so it was very difficult for me. I would talk it into a tape recorder and change it as I went along. From there I would have it transcribed by someone, because in that time we didn’t have computers like that. I realized a lot of my thoughts were backwards. I would rewrite it after I saw it in black and white, then I’d take it back [for transcription] again. It was an arduous process. 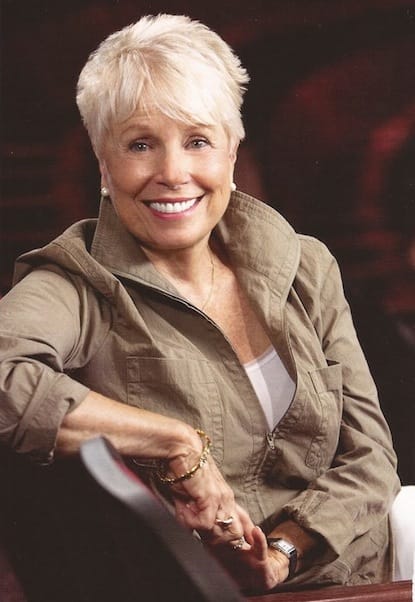 PHOTO COURTESY OF JOYCE BULIFANT
Joyce Bulifant: “I hope women who’ve been in the situation that I’ve been in will be brave and be able to know when it’s necessary to leave, or detach with love.”

PSL: How long have you been working on this book?

JB: The purpose was not so much about me as it was about what it was like being married to men who were alcoholics and the effects it had on children. Hopefully it’s [inspirational], with entertaining stories about the Golden Age of Hollywood and all the very famous people I was fortunate enough to be around growing up.

PSL: Will you name-drop a few of the Old Hollywood celebrities?

JB: Oh gosh, there’s so many! Fred Astaire — I got to dance with him. I worked with Fred MacMurry. My mother-in-law was Helen Hayes, so I was with all kinds of people in the theater who were just brilliant. And then my travels with Helen Hayes and Walt Disney. Lillian Gish, a silent movie star. All the people I worked with in game shows.

JB: It’s really Roger’s and my love story, interwoven throughout the whole book. There’s several juicy parts, some hopefully funny parts, and some very, very serious parts — the part when my friend Mariette Hartley, a wonderful actress, gave me a book called The Co-Alcoholic. I turned the last page and said, “That’s me. I’m part of the problem; I’m codependent.” That knowledge was incredibly important in my life but I didn’t heed it until a few marriages later. But, I finally got it.

PSL: Is your experience with alcoholism part of the reason philanthropy is so close to your heart?

JB: I guess so. Also, I was a child in foster homes and my heart goes out to children who’ve been abused and who have been abandoned. I can’t walk by a baby or a little person without stopping and talking to them. A counselor said to me, “What you do in helping children — you see yourself in them — really, you’re just helping yourself.”

I have learned that maybe I married people who were orphans — alcoholics and sad. My ego said, “I’ll love them. I’ll make them happy, then they won’t drink anymore.” My ego caused a lot of problems by thinking I could help someone by loving them. People have to want to love themselves. I hope women who’ve been in the situation that I’ve been in will be brave and be able to know when it’s necessary to leave, or detach with love.

PSL: What was most challenging about putting your story on page?

JB: Reliving it — the things I’d like to say didn’t happen. I have a good capacity, I think, to be able to forget and forgive; it’s a good thing and it also can be a dangerous thing. I had to remember all the things that hurt. That part was a little difficult. But, I never ever looked at a blank page. It just poured out.

PSL: Where is home for you?

JB: In Indian Wells with my wonderful husband Roger Perry. We’ve been married 15 years, together 17, and in love for over 50. We came here during a few of the winter months and decided, well, why don’t we move here. Now we’re close to all the kids in Los Angeles and we visit Colorado when we can.

PSL: Where are your favorite spots to hang out in town?

JB: We adore Si Bon and the French Corner. The minute we walk in [to French Corner Café], they take two lemon meringue tarts out and put them aside without our even asking. I love Italian food, so any Italian restaurant, especially the Tuscan Grill near the Mary Pickford Theater. And of course, I have to mention CVRep [Coachella Valley Repertory Theatre] and Dezart Performs.

PSL: You’ve appeared on stage there! And this month you’ll be front and center at the Visionaries of Tools for Tomorrow event at Acqua California Bistro in Rancho Mirage.

“Oh boy! (thinks for a moment) I have two (mottos). One is, ‘What you are is God’s gift to you. What you become is your gift to God.’ The other one is, ‘It’s nice to be important, but it’s more important to be nice.'”Mr. WordPress

JB: From what I understand, it’s going to be quite entertaining. They are having music, and a little girl who sang a song that Roger and I wrote is going to be singing. There will be a cocktail reception and a question-and-answer session with the editor of the book.

PSL: What interests you about working with local nonprofit Tools for Tomorrow?

JB: Tools for Tomorrow offers an after-school arts program for children with writing and drama, and dancing and music. If I hadn’t had that in my life I would not be where I am today — that was one place I could excel, in dancing and music and drama. I certainly wasn’t excelling in the classroom, so it gave me great confidence and I think the arts is so important for children. For children who have any type of learning difference, it’s just wonderful.

PSL: What’s up next for you?

JB: [The book launch] is a huge thing. The Disney people are doing a lot. I’m spending time at a Disney fan club event, then we fly to Chicago. Every place they’re having a signing and a portion of the proceeds goes to the organization. There’s an alcohol-rehab place doing a benefit. There’s a literacy program doing a benefit. There’s another benefit in Denver for The River Bridge, an advocacy center for abused children of which Roger and I are founders, and also for the Rotary Club. I’m going to New York to do the Equity Benefit for Aids. They’re doing a concert version of The Happiest Millionaire, which I did for Disney 50 years ago. We go to my school, I think, and do something there. Then we go to Maryland, then Virginia, and then Nashville.

PSL: Will you ever get some downtime?

JB: It’s going to be very busy, and then my husband and I are sailing away to Hawaii in December and just having our Christmas alone together this year.

PSL: That sounds like a much-needed break! Leave us with this, Joyce: What’s your motto?

JB: Oh boy! (thinks for a moment) I have two. One is, “What you are is God’s gift to you. What you become is your gift to God.” The other one is, “It’s nice to be important, but it’s more important to be nice.”

Join the author for hors d’oeuvres, champagne, and live music when she discusses her book at Acqua California Bistro in Rancho Mirage, Nov. 19. Hosted by Visionaries of Tools for Tomorrow, the event supports the local nonprofit’s arts-education programs throughout the valley.