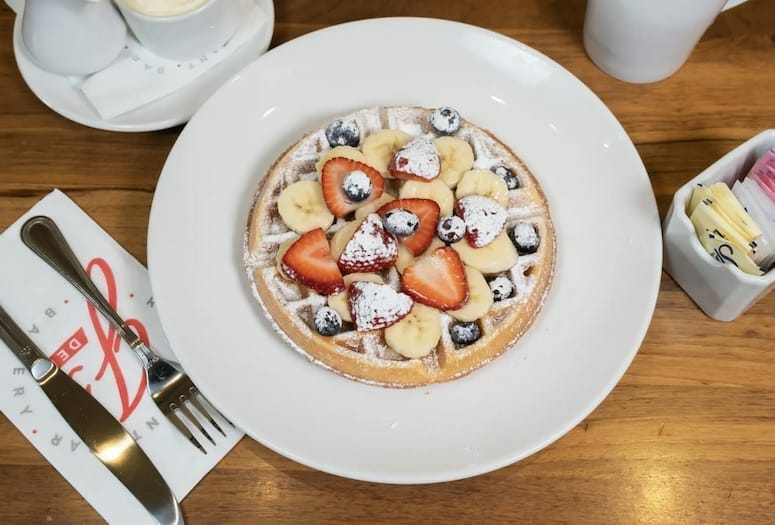 In another life, Jay Rubenstein was an actor. He understands the importance of captivating an audience, a characteristic that bodes well in the restaurant business as he and his wife Vanessa embark on a new venture in Palm Desert. Open since March, J’s Deli has taken over the spot previously occupied by Manhattan in the Desert.

Right off of Highway 111, this eye-catching restaurant offers a wide range of dishes from breakfast to dinner, a full indoor and outdoor bar, a large covered outdoor patio area, and an inviting atmosphere and dazzling decorations throughout. While first impressions have been good so far, Rubenstein says, their participation in the upcoming Greater Palm Springs Restaurant Week offers an opportunity to make points with the local audience who live here all year ‘round.

Set for June 3-12, Greater Palm Springs Restaurant Week offers more than 60 participating restaurants across the Coachella Valley serving up special lunch (ranging from $15 to $35) and dinner menus (ranging from $39 to $59) just for the 10-day promotion. Rubenstein, who says he never visited the desert prior to staking his claim with J’s Deli, chats with Palm Springs Life about how he landed in Palm Desert. 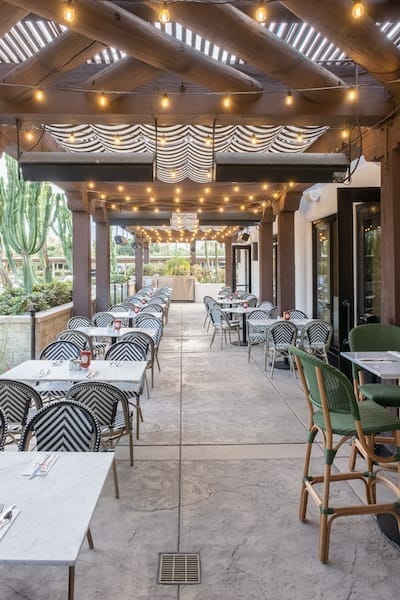 The outdoor patio is covered and spacious.

How did you become interested in starting a restaurant here?

It started nine years ago when someone approached me to open up a deli. I’ve been in the restaurant industry for 40 years, but I’ve never done a deli before so I was kind of hesitant. We talked and came up with this concept that a deli should look modern and cleaner. We did a version of this in Calabasas. Alex Lovey was the owner and we worked together on it. We came up with a pretty good concept. Obviously, Covid hit so we took a loss. But I had an opportunity to come down here a few years ago, with my business partner Ron Tampton, who approached me and said I have a great place for a deli. I said I’d check it out. My wife and I fell in love with the desert and the idea that Ron had created for this space. We really opened it up. My wife designed it. We got rid of some doors… opened up the kitchen space. We did the patio, which turned out gorgeous with the awning, market lights, and the outdoor/indoor bar. The main difference between this concept and the last one I did is that Ron gave me free rein to do what I needed to do. The only non-negotiable was he wanted it to be “J’s Deli”. So it was mine.

What began your interest in starting a restaurant?

My history was that I was an actor and I moved to New York. I had some success in theatre, but in between my theatre gigs, I had to pay rent. The natural thing was to get jobs at restaurants. I lied about having experience, and I think the general manager knew I was lying when I said I had served before. It was one of those things that came easy for me. I was approached years later by Ron Tampkon and Shelly Tampkon, his wife, and they wanted to know if I was interested in starting something new…I don’t think I’ve ever had the confidence to do something on my own. I knew in my mind I was capable, but it was my wife, Vanessa, who pushed me to be my own boss. My wife was instrumental. I remember saying, “I’m almost 60 years old, I've got to see if I can do it. I’ve accomplished a lot but I haven't really accomplished what I needed to.”

I came in here on July 1, and I had nothing. I remember looking up, because I do talk to God a lot, and asked him what I was doing... I have no chef, no architect, no nothing. I’m just in this building. I would wake up at night and pray to God to help me. And somehow, he must’ve listened, because I was able to find the architect, contractor, tradespeople, vendors, and we did it in eight months with extensive remodeling. I thought what is the point if you don’t just go for it? I was in this restaurant every day.. and I sat in the other room. There was nothing to do but I started making it my ritual to come in and start to get to know my space. …I believed it was a great deal. Every restaurant last year in the summertime was busy. We went to a restaurant in August, 115 degrees on a Tuesday afternoon, and there was one table left, on the patio! I thought summer might not be so bad down here. I say to all the restaurants who close during summertime - please close, enjoy your summer vacation, but we’ll be here. 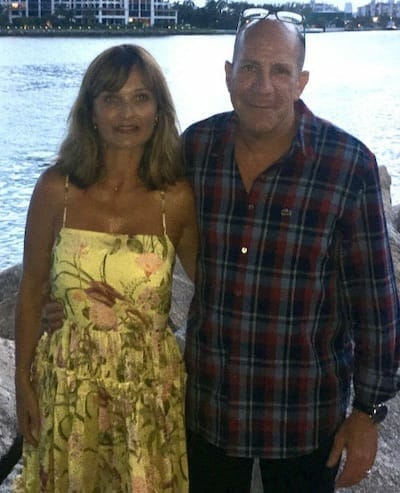 How would you describe the menu to someone who has never been here before?

I would describe the menu as Jewish traditional food. But you have everything on the fringes. A deli has to have a wide variety to survive. The days of being a niche deli are sort of over, especially in Southern California [because there] are more health conscious people out there. I never liked going to a deli as a kid. You get a hot dog or a pastrami sandwich — I don't want that for dinner. The whole menu is in play. We had a busy breakfast yesterday. I walk by and touch the tables… This is 8 o’clock in the morning, by the way, and one woman is having eggs Benedict, and the other is having a reuben. That’s what I like to see! She wants a reuben at 8 in the morning, done. Happy hour, for instance, is from 3-6 daily and you can sit anywhere in the restaurant. The whole menu is available all day long.

I was brought up where eating dinner was a big family thing. I ended up doing restaurants and it’s a social event going on. I don’t think we realize how It is a social event.
People want a good experience. The difference in the desert from LA is that I think people consider this a tourist town. We rely heavily on our locals. We need to treat everyone graciously. Even though it’s about food, it’s still about people and making people feel comfortable… What we’re trying to create here is a neighborhood hangout… The area really craved this, I think. People would really tell me they missed Manhattan Deli, (the previous restaurant) because there is something very special about this building. A building is an inanimate object, but this one has good energy. Energy is very important for a restaurant.

How did you build the menu and choose the items to place on it?

Everything’s made fresh. Everything is baked here, and everything is made here. The thing that’s most different is all of our ingredients, products, dressings, are made in house. We make everything from scratch here. Even the bleu cheese dressing, Russian dressing, thousand island, sauces to order, like for the chicken piccata, we make everything. Everything really is the freshest. Deli’s are all about quantity… We’re really about quality as well. I believe in serving an excellent product. if you give that to the consumer, then they can understand the price if they see the quality.We do have some more traditional Jewish items on the menu but we’re trying to cater to the bigger audience. Our untapped reservoir is catering, we do delivery, take out... We just opened up our Open Table reservations because we’ve got our sea legs, so to speak. It’s a great venue for brunch. Our patio is one of the prettiest. We like dogs, by the way. 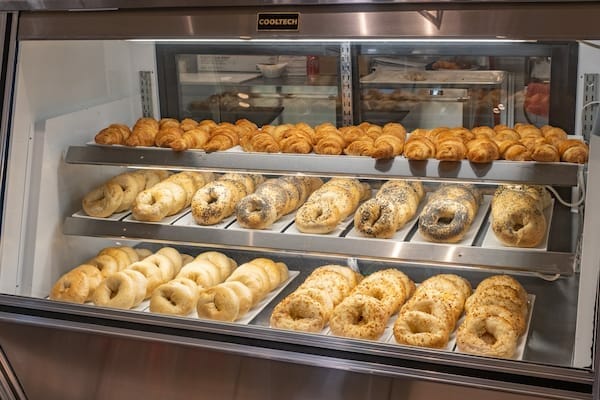 Many items in the restaurant are made from scratch and served fresh daily. Leftover bagels are made into chips, which come to the tables with pickles as a free starter.

What do you think has been the most useful tool you’ve used for starting this business? What is a tip you would give to someone thinking of starting their own restaurant business?

I used to get 30 calls a day. I called every single person back, and when we opened I didn’t even have an opening sign. I just unlocked the doors. People were drawn in, and the best way to get somebody to feel really, really special is to remember their name. I learned very early on in my career, I remember somebody's name and they can feel it.

I haven’t seen you in a week, but I remembered your name. I’m not always perfect, believe me. My wife will tell you. But when our hosts were trained by my wife, when someone walks in, what are the [usual] first words out of a hostess’ mouth? “Do you have a reservation?” And maybe you’ll get a smile. Our hosts are not allowed to say that. We say “Hi”, “Welcome”, “How are you?”, “How many are in your party?” If they have a reservation then they will let you know. It’s that welcoming feeling. It’s got to be everything. The environment, people want clean especially now, open, bright, appealing. Gotta have a smile on your face. And you’ve gotta have good food. I don’t care how long the food takes to get out. Make sure the food tastes good when it’s at the table. My mentor told me, “Jay, it’s not a food business. It’s a people business.”

• READ NEXT: Workshop Kitchen and Bar: Editor's Pick for June 2022.