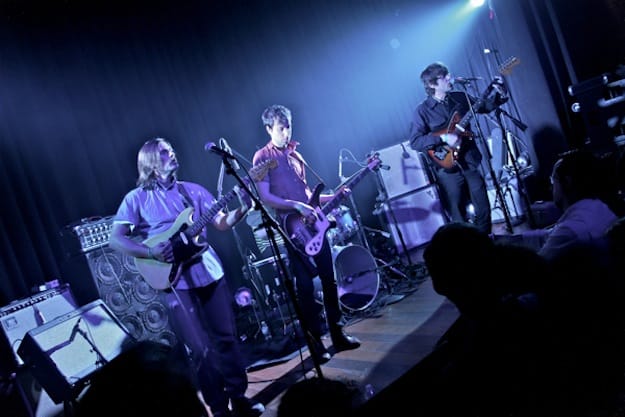 July 2
A wise man once said: “People are fragile things you should know by now/be careful what you put them through.” Whew … Was that guy a sage, or what? Those lyrics were sung by Editors’ vocalist Tom Smith on the epic track, “Munich.” If you love that song as much as I do, then you’ll be the first to download The Weight of Your Love. Keep your ears open for standouts like “Formaldehyde" and “Honesty” from these British rockers / Coachella alums.

July 4
Go America, it’s your birthday! To celebrate, Jay-Z is unleashing his eagerly anticipated Magna Carta Holy Grail on the huddled masses. The rapper has become music royalty, in part, due to his marriage to Beyonce. He’s also beloved for his famed ode to New York featuring Alicia Keys. MCHG shows Mr. Knowles-Carter’s not-so-quiet reflections on family (“La Familia”) and luxury (“Tom Ford”). Say what you will about rap; Jay-Z is the new Sinatra.

July 9
Preservation Hall Jazz Band does for New Orleans what the Rat Pack accomplished for Palm Springs. So in the interest of solidarity and reciprocity, pick up this group’s latest, That’s It! This collection of feel-good, Big Easy ditties are perfect for large get-togethers or small family gatherings in the backyard.

Tim Bluhm is a soft-spoken chap, or at least he was when I interviewed him in spring 2013. His band, the Mother Hips was traveling to the desert to play at show at Pappy & Harriet’s. Wouldn’t you know it; they’re coming back for the same purpose. See Bluhm and company when they play the Desert Dust Up Festival, Sept. 20 at Pappy’s. Until then, pick up Behind Beyond — the Mother Hips’ masterful self-released effort.

July 16
Music lovers, Woodsist Festival (born from the record label of the same name) will be going down at Pappy & Harriet’s Pioneertown Palace this fall. One of the bands debuted on the label’s roster is White Fence. Although the band’s latest is being released by Chicago’s Drag City – the label that benevolently gifted the world with Royal Trux – Tim Presley’s group is stronger than ever. White Fence is lo-fi and luscious. At initial listen, you feel like you’ve stumbled on a lost Beatles jam – something that Paul and John probably churned out post marijuana binge, pre-meditation session with the Maharaja. Hear White Fences’ self-titled LP in person at Woodsist Festival, Sept. 28. Until then, pick up this highly addictive record when it drops. Meet the band branded for the Coachella Valley. Desert Stars (pictured left) releases its LP Habit Shackles. Classically trained violinist Janelle Best serves up sinfully delicious indie rock that ushers its listener back to the early 1990s when the Sundays and Bettie Serveert were making music. Or if that’s too far a journey – back to 2004 when the Walkmen dropped its first LP, Everyone Who Pretended to Like Me is Gone. Good stuff, bursting with sonic layers, and perfect for those lazy Palm Springs nights.

July 23
Who could forget an inebriated Mariah Carey at the 2010 Palm Springs International Film Festival? The tipsy chanteuse waxed poetic about everyone from Helen Mirren (also in attendance) to Sapphire – author of the novel Push (Carey produced the award-winning film adaptation, Precious).

Mariah has come a long way in a few short years: She’s got a chart-topping single with R&B breakthrough artist, Miguel, and just completed an entertaining, albeit controversial first [um, and apparently last] season on “American Idol.” Now, Mimi is slated to release her much-anticipated 14th full-length album, The Art of Letting Go. The effort has had a couple of hurdles to cross when it was announced via Carey’s Twitter page that she would not only be leaving “Idol” but would be postponing the record’s release.  But her camp promises its arrival, which means we’ll soon be hearing remixed versions of singles from this one echoing from the speakers at Hunter’s and the Ace Hotel in no time flat. Palm Springs is known for its fabulous Jewish community. If you like to get down – klezmer style – but feel that this genre of music could use a nice punk infusion, allow me to introduce to you Gogol Bordello. Thank me later; pick up Pura Vida Conspiracy now.

July 30
He was the Marcia Brady of Coachella 2013: Poor little Earl Sweatshirt took a noticeable backseat to Tyler the Creator during his set. And Tyler was his special guest! We’ll pick teams and duke this one out Angelina vs. Jennifer-style later. For now, snag Earl’s cutting edge LP, Doris.  You’ll also want to support Señor Sweatshirt, who has cancelled a number of tour dates due to pneumonia (Those of us who follow him on Twitter misdiagnosed his symptoms as tuberculosis. Sorry, Earl, but glad you finally went to a licensed physician).

February 2013 was a romantic month for a lot of reasons: Valentine’s Day beckoned, and so did singer/ songwriter Robin Thicke. His show at Spotlight 29 Casino melted hearts and probably created a mini-baby boom in its wake (we’ll have to wait until November to know for sure). Now, with the release of his LP, Blurred Lines – as well as the success of its first single by the same name, it’s pretty safe to say that Thicke is now a bona-fide superstar.