(From left) Harmony Santana, Valerie Harper, and Liz Torres star in My Mom and the Girl, which will screen at the Palm Springs International ShortFest.
PHOTO BY TIBRINA HOBSON PHOTOGRAPHY/COURTESY MY MOM AND THE GIRL

The selection of films for screening and competition features star-studded casts and award-winning films from 60 countries around the world.  There are 55 curated programs, which will screen June 20-26, at the Camelot Theatres in Palm Springs.  More than 4,200 of the festival submissions will be available in the Film Market for industry attendees to view.  The complete line-up is available at www.psfilmfest.org.

This year’s star-studded shorts feature Academy Award® winners and nominees, as well as film and television stars including Summer Phoenix in Across My Land (USA/France); Thomas Lennon and Lennon Parham in All Exchanges Final (USA); Tatiana Maslany in Apart From Everything (Canada); The Dark of Night (USA) directed by Robin Wright and starring Leslie Bibb and Sam Rockwell; Sir Ian McKellen in Edmund the Magnificent (UK); Toby Jones in The Entertainer (UK); Julian Sands in The Escape (UK); Idris Elba in Five by Five (UK); Rick Fox in Game (USA); Carrie Coon in Great Choice (USA); Kate Winslet in The Lost Letter (Ireland); Rose Byrne and Bobby Cannavale in Martha Monster (Australia); Valerie Harper in My Mom and the Girl 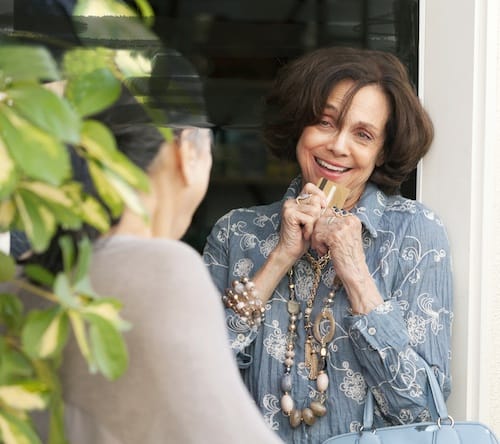 Valerie Harper, who starred in The Mary Tyler Moore Show and her own sitcom, Rhoda, takes the lead in My Mom and the Girl.

ShortFest jurors include: David Ansen (film critic/PSIFF Lead Programmer), Lindsey Bahr (Associated Press), Kate Bosworth (actress/producer), Ian Durkin (Vimeo), Sam Lansky (Time Magazine) and Heidi Zwicker (Sundance). Over $115,000 in prizes, including $20,000 in cash awards, will be given out in 21 categories to this year’s short films in competition. The Panavision Best North American Short Award winner will receive the use of a camera package valued at $60,000. First place winners in five categories will automatically become eligible for consideration by the Academy of Motion Picture Arts and Sciences for a possible Academy Award nomination.  Over the course of 22 years, the Festival has presented 101 films that have gone on to receive Academy Award nominations. Winners will be announced June 25 at a Closing Night screening and reception.

The future is already here. As virtual reality comes into its own as a new frontier for exploring emotion, narrative and character in thrilling new ways, hear from these experts on the latest trends, tech and storytelling applications in VR, and find out how you can get involved in this unique platform for short films. Guests: Ian Forester, VRPlayhouse; James Kaelan, WeVR; Sasha Samochina, NASA. Moderator: Rich DeMuro, KTLA.

When you are weary of watching endless cuts of your film, with its ability to change the emotional impact, music can make you fall in love with your film all over again… If you get the right composer. Using multiple examples, composer and Professor Peter Neff will teach you how to collaborate with composers to make your vision come to life on screen.

How do you build your audience, crowdfund, attract a financier, or find a way to get your film off the ground? The industry’s leading experts are here to discuss the realities of independent producing, fundraising and getting your project made. Our panel of experts will walk you through the basics and give you the tools you need to get started. Guests: Emily Best, Seed&Spark Natalie Difford, Cinereach; Peter Van Steemburg, ICM Partners; Hailey Wierengo, United Talent Agency.

We live in a new golden age of television. With more content than ever being produced for the small screen, and opportunities for both established auteurs and fresh voices. In these uncertain times for film, how can you break into the episodic medium? Guests: Barbara Crawford, FX Networks; Katie Krentz, Cartoon Network; Kim Sherman, Stage 13; Caleb Ward, SeriesFest. Moderator: Katherine Tulich, HFPA/RogerEbert.com.

So, you have a film and are ready to hit the festival circuit. What festivals do you hit? Do you send a cover letter?  Should you put your film online? Come find out from our festival insiders. Guests: Kimberley Browning, Hollywood Shorts; Eileen Chiao, USC School of Cinematic Arts; Nancy Collet, Collet Cinema; Paul Sloop, Cleveland Film Fest.

Do you have an idea you’re ready to pitch? Then you need to know how. Our industry panel will show you the ropes, and share stories on the do’s and don’ts of making your pitch. Perfect training for anyone signed up for Saturday’s speed pitching roundtable. Don’t miss this workshop. Guests: Emily Best, Seed&Spark Nick Ogiony, CAA; Peter Trinh, ICM. Moderator: Liz Marion, Palm Springs ShortFest.

After all these years, short-form documentary filmmaking is still a thriving art form and tool for change and justice. The right length and topic in skilled hands can be just as transformative as a feature length or televised counterpart. Learn the ins and outs of short-form documentary filmmaking, and how to get your work seen by those who need to see it. Guests: Hussain Currimbhoy, Sundance Film Festival; Abby Davis, Preferred Content; Raegan Hodge, CARE; Tom Oyer, Academy of Motion Picture Arts & Sciences; AJ Schnack, Bonfire Films of America Moderator: Jeremy Kay, Screen International.

Moderated by Gregg Kilday from The Hollywood Reporter, join us in conversation with actress/producer Kate Bosworth and get some insight into navigating a hyphenated career path and making the move from the spotlight to behind the camera with her new production company, Make Pictures Productions.

Navigating the festival circuit can be challenging, but with a cool head and a strategic plan, you can maximize your film’s visibility, make amazing connections and drive your filmmaking career forward. A group of programmers from top U.S. festivals will provide candid insights into the programming process, deciding which festivals are best for your project, and making sure you make the most of your festival experience. Guests: Sarah Harris, Denver Film Festival, Dallas Intl. Film Festival, Seattle Intl. Film Festival; Adam Piron, Sundance Institute; Amanda Salazar, San Francisco Intl. Film Festival; Paul Sloop, Cleveland Film Festival. Moderator: Sudeep Sharma.

Who is behind film and festival reviews? Learn from industry pros about how to catch the attention of the top writers and get your films reviewed. Guests: Jeremy Kay, Screen International; Malina Saval, Variety; Anne Thompson, Indiewire. Moderator: Lili Rodriguez, festival director.

So you’ve made a short, or maybe a few, and perhaps you’ve been lucky enough to play the festival circuit. What happens next? And where do you go from here?  Learn about the many paths your short can take beyond film festival screenings and how to make the most of your audience and future opportunities from a panel of experienced industry experts here to help keep the dream alive. Guests: Jeff Deutchman, NEON; Ian Durkin, Vimeo; Kate Hurwitz, Cinetic; Linda Olszewski, Shorts HD. Moderator: Malina Saval, Variety.