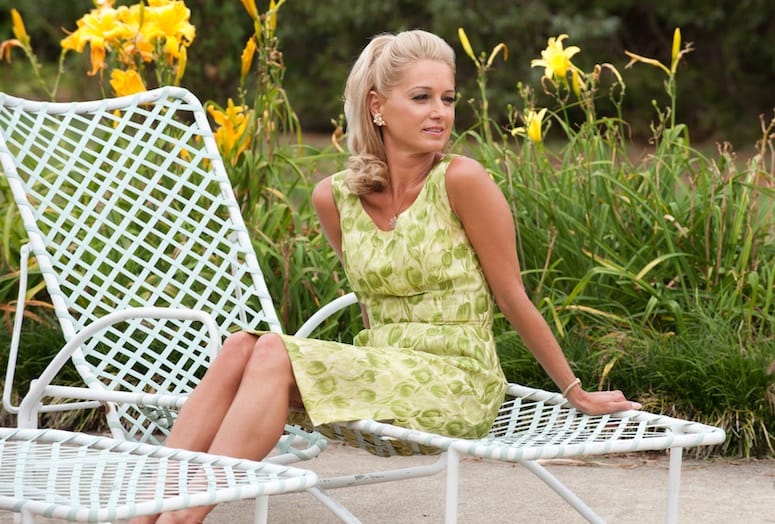 Katherine LaNasa didn’t just take a dip in the pool. She dove in head first.

When the opportunity to play Donna in Billy Bob Thornton’s directing return after nearly a decade in “Janye Mansfield’s Car”, LaNasa found her confidence taking a bounce off a diving board and completing a perfect cannonball.

Playing one of the central female roles in a picture loaded with leading male actors, LaNasa said Thornton, Duvall and Kevin Bacon voiced their support of her efforts.

“They really changed me,” LaNasa says. “If you don’t get an opportunity like that, you might think you really have the goods, but you never know if you do or not.

“So to get that opportunity to go so swimmingly, so smoothly and be so fun, it made me feel like I can play in this pool. I know what I’m doing. I thought I did. Yeah, I do. You know?”

LaNasa will be present for the screening of the film Sept. 14 at Cinemas Palme d’Or in Palm Desert. The movie starts at 6:30 p.m. with a Q&A to follow featuring her, writer Tom Epperson and actress Shawnee Smith.

During a break from shooting “Night Shift” in Albuquerque, N.M., a mid-season replacement show on NBC, LaNasa spoke further about “Jayne Mansfield’s Car”.

Have you been to Palm Springs before?
“I have been out there many times, but not in a while. I always liked the desert, like the heat. Really like the architecture. When I was really broke, when I was a single mom and my kid was like 2, we would go stay at some motel in Indio. Some ex –military guy owned the hotel. It was really clean and cute. They would let me bring my big dog, and we would sit by the pool. This was like 20 years ago. I had worked with William Devane (Devane’s Italian Kitchen) and the hotel wasn’t too far from it.”

“Jayne Mansfield’s Car” is about a clash of cultures set in a small town in Alabama in 1969. What are three reasons why audiences are attracted to family dynamics?
• “It’s part of the human condition. They all know what buttons to push because they installed them.”
• “Disappointment seems to play in it a lot, like the child not meeting the parent’s expectations – the child feeling like a disappointment.  Those are probably some fears and wounds that all of us carry around.”
• “I also think like a lot of families, being in a family feels a little competitive. How do you hold your space and how do you hold yourself up in a family. Billy told me that with all of these men, they way I did it was to be the best female.”

What in your past did you draw on for the role of Donna?
“I felt very natural for the part. I’m from the south (New Orleans). My aunt was a beauty queen. There were pictures of her in the early 1960s as a Mardi Gras bell. I thought she was always so glamorous. She still washes and sets her hair every day. She’s still really pretty. At the time the movie is set in, the south was even more behind in some ways as recognizing women as smart and as individuals, who could do more than teach or be a nurse. Not that there is anything wrong with that. When I came up, we were psychologically limited to that. I was not encouraged to do something with my mind. I remember my father bragging about someone’s girlfriend because she wore a tight suit. Really, is that an accomplishment?”

What impressions did you come away with of Billy Bob Thornton as a director?
“He has a kind of crazy voodoo where he really trusts himself with his casting and really let’s you run with your character. He only starts to direct or say a lot or pull you back if it’s absolutely necessary. You don’t feel at all like you have to protect yourself against him or be combative. You really want to please him. He’s said, 'OK, here you go, make your choice', and that you feel such responsibility for your choice because he has given you so much freedom. His style of working is both heavy and soft-handed at the same time. He gives you all that freedom, but you don’t rehearse and you don’t really have any say on the blocking of the scene, like where you are going to go. If you want that, you had better have talked to him some time before (laughs).”