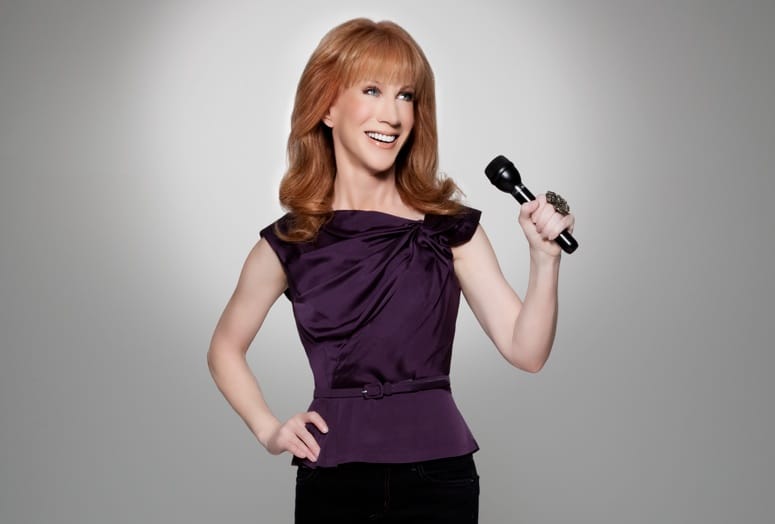 The incredibly hilarious and sharp-tongued comedian Kathy Griffin is coming to town.

And she’s bringing her mother.

“I’ll hide in the air conditioning,” says Griffin, who appears June 6-7 at the Agua Caliente Casino Resort Spa in Rancho Mirage. “The sun and I are not friends, but audiences are. We’ll be there with a box of wine, nice and chilled. She’s a big Palm Springs person. We’ll be seeking out the misters and dining ‘al fresco’. She enjoys the mister experience."

Don’t be fooled, however, that this is down time for Griffin. She is one of the hardest working comedians in the business stacking up tours and appearances with hardly a break.

A pace that she says prompted fellow comedian Chris Rock to ask if her busy schedule was the result of her needing to pay child support. She quipped that she has no children to her knowledge, but recently she won the Guinness World Record for most stand-up comedy specials by a comedian.

“I think people might not know the grind behind the scenes of what it takes to be a female comedian at 53 years old,” Griffin says. “I’m constantly writing, and as much fun as I have, I never really have job security.  I audition every day. You have to love it and hold the audiences’ attention.  You can do a sex tape, but I didn’t want to be famous. (I wanted to be) funny, talented and make people laugh.”

Griffin took home this year’s Grammy for Best Comedy Album, CalmDown Gurrl, after being nominated for five of her previous albums without a win. She is the first female to receive this award since 1986 following predecessors Lily Tomlin and Whoopi Goldberg.

“Nobody is talking about the awesome year KG has had,” Griffin says. “I mean I’m on a mission to say that female comedians are becoming extinct in the late night talk landscape. People want to laugh regardless of gender. I love my male cohorts, but chics are funny.” Amidst grabbing Grammy’s, television appearances, and generally stirrin’ it up with her take on social media, pop culture, and politics, Griffin is a force embraced for her ability to make us laugh.

Your Mom is 93, and I read you're thinking of doing a documentary on her?
"I am doing that. I think, you know, it’s a life we all want to live. We all want to be Maggie (pictured at right) when we are 93 (She turns 94 on June 10). She does not know how much she is living and enjoying a healthy life. She’s sharp as a tack. Sometimes I wish she did have dementia. She would like me to do an entire routine where I don’t offend. Make no mistake, she would love me to be a dental hygienist. That’s a sensible vocation!”

How did it feel to win the Grammy this year?
“(Winning the Grammy) was so monumental to me. Losing five years in a row… it wasn’t pretty. I’m not a gracious loser, but I was so surprised to be nominated. In all honesty when you are lucky enough to be nominated for a major award, you want to win. I am most proud to win the award as the first woman since 1986.”

You mentioned in an interview that late-night talk shows are without female hosts. What do you think it will take to change that?

You’ve had a lot of coverage regarding your style and glamour.
“A gay saves the day! My stylist, Robert Verdi said, ‘You are not going to be on the worst dressed list on my watch!’ I take fashion seriously.  I just go high end. I’m not Sarah Jessica Parker. I’m not 20 and I’m not taking chances. I am like a doll that is dressed and I say, yes, thank you. It’s part of the pomp and circumstance. But I also have no ego. I’m not afraid of being on ‘Who Wore it Best’.”

What do you like to wear in your down time?
“I prefer to be naked. I’m a big nudist. I don’t have a shy bone in my body.  I do have a bangin’ bikini bod and I’ve done some modeling. I’m waiting for a Playboy offer any day. I’m actually trying to acquire inhibitions. There are no words I won’t say. That’s why I don’t drink. I don’t think I should loosen up anymore. I won’t be holding back at Agua Caliente!”

Speaking of your bangin’ bikini bod…You recently posted a selfie of yourself before going on Jimmy Kimmel that shows your body lean and mean. How did you do it?