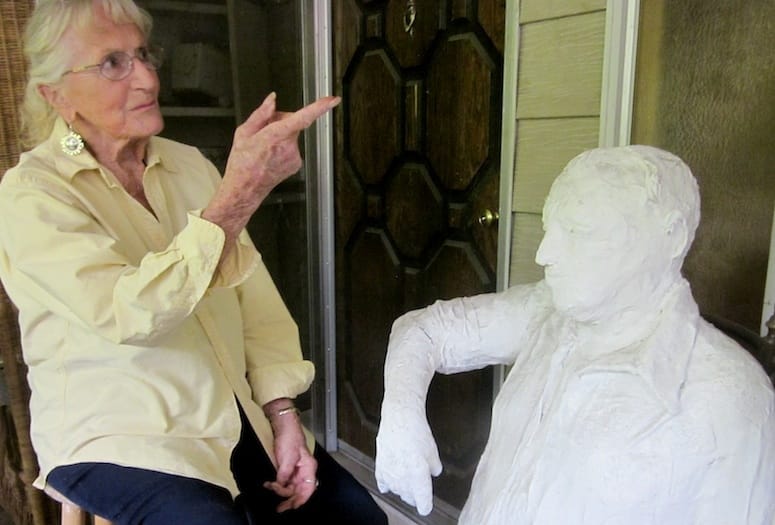 Her small and large sculptures fill the living room like a festive family gathering.

In one corner, a mother cradles a sleeping baby, while a young girl sits on a swing nearby. In another corner, three boys are playing baseball.

In the middle of it all, a raggedly elderly woman opens an empty purse.

“I’ve always been drawn to homeless people,” artist Kay Henkel admits. “I think it’s because I was homeless once.”

It’s hard to imagine that this regal-looking renowned sculptor of large-scale portraits in bronze, clay and duracast, was once penniless. Among her clients are Hollywood celebrities, including Candace Bergen, Gene Hackman, Lucille Ball, Sonny Bono and Sidney Sheldon.

So when the Desert Arts Center (DAC) announced Henkel’s book signing/educational fundraiser May 2, most thought it would showcase her sculptures.

“That would really be a boring book,” Henkel says, laughing.

Henkel’s “Rooftops & Shoestrings” book signing/education fundraiser will be held from 6-8 p.m. at the DAC in Palm Springs.

VIDEO: Kay Henkel describes the concepts behind her sculpture pieces.

Instead, “Rooftops & Shoestrings,” tells the remarkable story of how the young Henkels sold everything to accept an import/export job in Rio de Janeiro only to discover that the company had gone kaput.

They were immediately thrown out of their hotel with just the clothes on their backs. They didn’t speak Portuguese nor have any job prospects.

However, as luck would have it, they met a friend of a friend from the boat who allowed them to secretly sleep on the floor of his office for months, only eating canned sardines.

Henkel’s humor carries the story along from how they spent their first Christmas in the office with a discarded tree decorated with sardine lids to landing their first paying job.

All that time, Henkel kept a journal. It wasn’t a book then, but just a way to pass the time. The book took shape when Henkel realized that she wanted her four kids to know their story.

When they were young, she would write a chapter at a time. But then the book sat on the shelf for years, until recently when she met a book publisher at the pool.

The story is good reading, with humor, adventure, intrigue and romance.

Like the homeless she now sculpts, Henkel learned to pilfer uneaten hard rolls from cafes, but she never got used to getting pinched in elevators.

Today, Henkel’s most popular sculpture is called, “Elevator,” in which 20 individuals are crammed shoulder-to-shoulder, talking on the phone, ogling women, pick pocketing, and poking one other. The overall image tells a story.