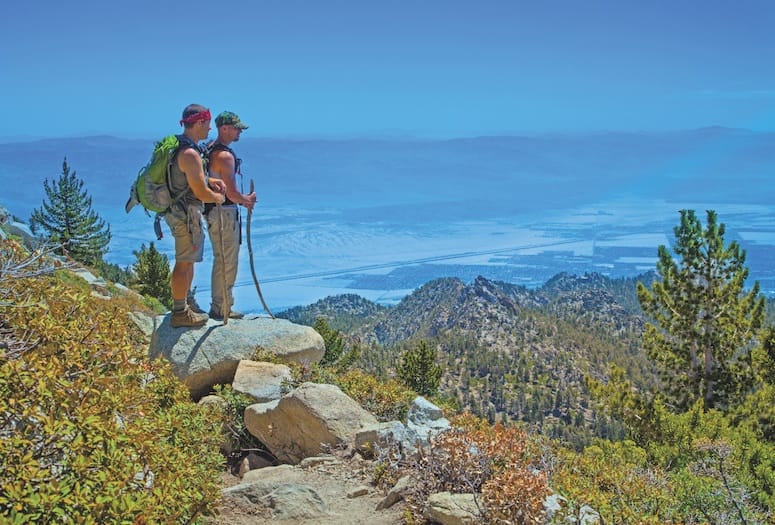 If you venture past this signpost — at Whitewater Preserve just off Interstate 10 — you’ll feel a narcotic calm wash over you as you pad through shady bosques and inhale the sweet scent of willow and mule fat. Priorities are upended. Suddenly Instagram followers mean less to you than finding the secret hideout of the sora marsh bird.

“There’s a feeling of being in a different place,” says former Whitewater ranger Jamie Haney. Indeed, wilderness is the ultimate hip amenity, and our valley claims more federally designated wilderness areas than almost any well-populated area in the country. That’s something to celebrate this year — the 50th birthday of the Wilderness Act.

Without the act, Mount San Gorgonio would be a developed ski hill (plans were in place before the act passed) and roads would snake into the Whitewater wetlands. The whole place would feel different. The federal legislation was intended to give future generations “a glimpse of the world as it was in the beginning,” as President Lyndon Johnson once said.

“Wilderness is a long-term vision,” says Jim Foote, manager of the Santa Rosa and San Jacinto Mountains National Monument. If you think about what the valley might look like in 100 years, he explains, those boundary signs will start to seem even more luxurious. Wilderness ensures that the “community of life” (the ocotillo plants, the Mexican free-tailed bats, and bighorn sheep) will have a place to continue their evolution undisturbed.

We claim at least six designated wildernesses within easy reach of the valley’s hotels and resorts, and many more if you expand the region out along the I-10 freeway to the Colorado River. There are larger natural areas all around us — the San Jacintos, Santa Rosas, Joshua Tree — and the wilderness areas within are the purest hearts of these places.

Congress passed the Wilderness Act in 1964, the same year as the passage of the Civil Rights Act. Some say the two pieces of legislation were equally revolutionary. North Carolina author and wilderness advocate Will Harlan has said the Wilderness Act is “the first law that ever gave priority to nature over people. That’s such an incredibly radical, forward-thinking act.” (2014 is also the 20th anniversary of the California Desert Protection Act, which established many of the local wildernesses.)

While national parks were created largely for tourism, wilderness was created for its own sake. It’s not there to serve us. You can’t dig for gold or plant a wind farm there. Mountain bikes are prohibited, and hang gliders can’t land there. There’s much debate this year about just how we should define the parameters ­— can you bring smartphones and electric razors? But you can pretty much ignore all that. The human tendency to nitpick belongs in civilization, not the wilderness. Despite the restrictions in place to protect plants and animals, these places are most certainly still for people — those who know when to go home. Employing unusually poetic language for a federal document, the act states that wilderness is:  “primeval … untrammeled … where man himself is a visitor who does not remain.”

In our local wilderness areas, you can visit the world’s largest cholla (Chuckwallas) or multicolored badlands (Mecca Hills), commune with an ancient limber pine (San Gorgonios), or nap under the cottonwoods of Horsethief Creek (Santa Rosas). Or you can sit on your balcony at The Saguaro hotel and still catch a whiff of the untamed lands.

In fact, Bureau of Land Management interpretive specialist Tracy Albrecht notes that you can glimpse wilderness from almost any hotel in the valley. Just knowing it’s there is a kind of freedom, even if you never visit. (A number of Wilderness Study Areas are currently under review for possible federal designation. So the next time you check in to one of our hipster hotels, there may even be more wilderness to explore.)

That free feeling of wilderness was well known to Haney, 31, when she lived at the ranger residence at Whitewater. During her frequent hikes back to a landmark called Red Dome, the feeling hooked her so completely she decided to seek more of it. In 2013, she made a solo hike of the entire Pacific Crest Trail from Mexico to Canada.

The 5 1/2-month walk took Haney through 48 wilderness areas. Each time she saw a wilderness boundary sign (sometimes a wooden placard nailed to a tree), she felt the same happy anticipation. “It was something I’d look forward to my whole trip,” she says.

Back home now, Haney can attest that the wilderness feeling exists as fully in the Coachella Valley as any place she found in Northern California’s Trinity Alps or Washington’s North Cascades. “We’re really lucky to have so many pristine places here in the desert,” she says. “It’s just insane how many places we have that are still untouched and intact.” Nearly 80 percent of the land within Joshua Tree National Park is designated wilderness. Step away from the major roads and you’ll easily find that wilderness feeling (no roads, trails, or kiosks, and no risk of future development). Albrecht recently took a group of wilderness novices to Fan Hill, a rarely visited section of Joshua Tree off Dillon Road near Sky Valley. When they stepped past the wilderness boundary, teacher Dawn Castiglione described the feeling as “a beautiful calmness,” adding, “I don’t think I even understood what ‘wilderness’ meant before today.” The high peaks here were in danger of development prior to the passage of the Wilderness Act. You can jump into this wilderness via the Whitewater Preserve or Mission Creek Preserve, both managed in high style by the Wildlands Conservancy. Some people say the backcountry here looks as big and wild as Nepal, with diverse plants from rabbit brush to Jeffrey pine. (For more on the history of local wilderness, see George Wuerthner’s book California’s Wilderness Areas.) You don’t have to drive all the way to the Sierras to see granite spires, subalpine forests, and fern-laden meadows. We have it here in the San Jacinto wilderness. If you study the maps, you’ll find various wilderness designations including Forest Service, State Park, and Bureau of Land Managment. The distinctions are man-made and not important to the true wilderness-seeker. The Pacific Crest Trail (a 2,650-mile path from Mexico to Canada) passes through 28 miles of this wilderness. You can access the wilds from the Palm Springs Aerial Tramway, Highway 74, or by way of Idyllwild, where you’ll find the famous climbers’ haunts of Tahquitz and Suicide Rocks. You can get a view of this ancient wilderness area by driving up Highway 74 and walking the paved walkway at the Cahuilla Tewanet Scenic Overlook. The lesser-traveled Santa Rosa Mountains, dotted with pinyon, juniper, and agave, were once heavily traveled by early Cahuilla Indians. Adjoining the wilderness to the south is more designated wilderness, in Anza Borrego Desert State Park. To explore the Santa Rosas, take the Cactus Spring Trail from the parking area near Pinyon Flats. This folded, multicolored wilderness looks like no other place on earth and is a favorite of artists who come here to paint the smoke trees in the washes. The easiest access is from Box Canyon Road, near Mecca. The road bisects two wilderness units: Painted Canyon and Hidden Springs Canyon. Walk off the road in either direction and you’re into the untrammeled lands.

Our farthest-flung wilderness area is a corrugated country inhabited by resident bighorn, burro deer, and desert tortoise. Adjoining Mecca Hills to the west, the crumpled and eroded scenery is courtesy of the underlying San Andreas Fault. The hills are home to the spiny-leaved Orocopia sage and the Mecca aster. Drive 20 miles east of Indio and take the Chiriaco Summit exit off I-10.

IF YOU GO: Visit www.wilderness.net for detailed information on each of our wilderness areas, as well as information on Leave No Trace principles and wilderness etiquette. Poet Gary Snyder suggests: “Nod to all the plants and animals and birds … and tell a good story when you get back home.”