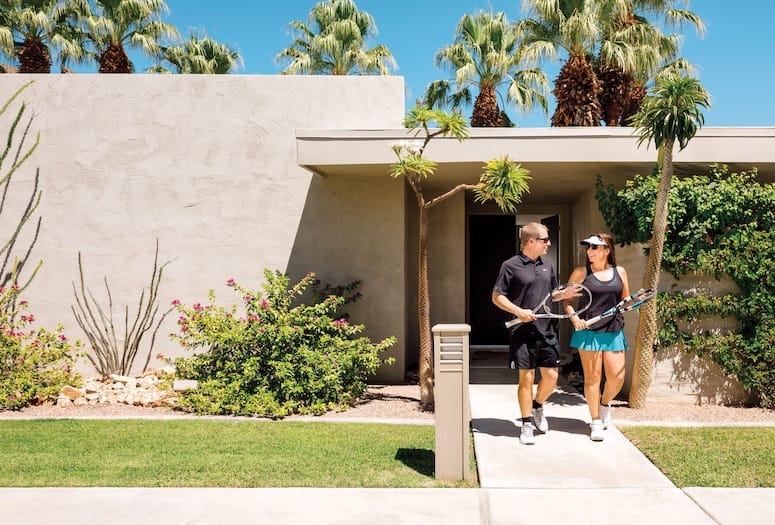 Rob and Kem  Theilig stroll out  of their Cody-designed villa on  their way to the pickleball courts ... We’re kidding!
PHOTOGRAPHS BY LANCE GERBER

Kem Eva Theilig, a designer, and her husband, Rob, a musician, started coming to Palm Springs in the early 2000s. The relaxed pace and indoor-outdoor lifestyle of this desert oasis provided an appealing respite from their busy, urban lives in San Francisco.

Nine years ago, they decided to try their hands at tennis after a client of Theilig’s opined that “people over 30 don’t learn anything new.” Never one to pass on a challenge, she found a teacher in San Francisco. She and her husband fell in love with the game and took it up with a vengeance, joining the Plaza Racquet Club in Palm Springs and playing whenever they were in town. They bought a nearby condo and eagerly looked forward to their tennis-filled sojourns.

In 2016, Palm Springs Unified School District, which owned the land on which the Plaza Racquet Club sits, decided to sell it to a developer. Despite the valiant efforts of preservationists and tennis fans, the club closed early last summer. The elegant, airy clubhouse, designed by Laszlo Sandor, once an apprentice in the office of architect William Cody, was demolished early this year, and the courts and grounds sit overgrown with weeds, a poignant reminder of matches won and lost. With the closing of their beloved club, Theilig and her husband realized they were going to be living next to a construction site, possibly for years. “We just couldn’t bear the thought of seeing the Plaza bulldozed,” says Theilig.

Determined not to give up their favorite pastime, the couple decided to visit the Palm Springs Tennis Club in the Historic Tennis Club neighborhood to see if they might be able to become members. On the way down West Baristo Road, they noticed a for-sale sign at the 13-unit midcentury condo complex directly east of the club. They called real estate agent Brady Sandhal and 15 minutes later were walking through the unit’s front door. There was much to admire: It was in sight of the tennis courts and had spectacular views of the mountains to the west. With her designer’s eye, Theilig could see past the flaws in the unit’s interior — although it had been renovated in 2002, it was outdated, nondescript, and dark, with a number of small, closed-off rooms — and begin imagining how she and her husband could transform it into, as she puts it, “their forever Palm Springs home.”

They made an offer on the 1,975-square-foot condo that day. Theilig got busy sketching. They closed escrow on June 15, 2016. Two days later they were playing doubles at the Palm Springs Tennis Club. 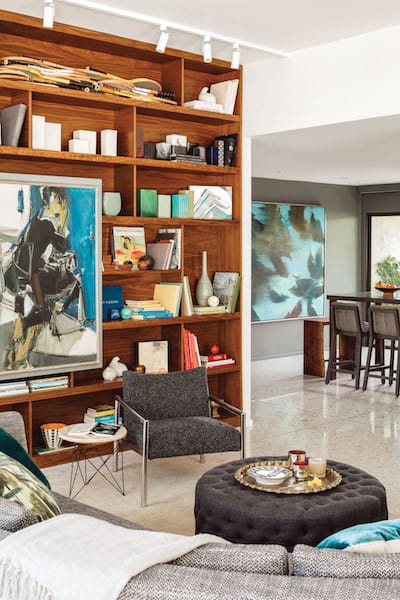 The cozy den was created from a spare bedroom and separated from the living room by a walnut library wall.

When they told their friend Courtney Newman, owner of the vintage furnishings shop Modern Way, of their new home, his response gave them a clue to the architectural provenance they thought they had recognized. “Ah, those Cody condos are wonderful,” he told them. Another friend, San Francisco real estate agent Jack Bernstine, did some research and confirmed Newman’s observation. The complex was indeed designed by Cody, and its 1965 model homes had interiors by Arthur Elrod. The units were originally marketed as “tennis club homes,” and advertisements featured a palm tree logo, identical to that of the Palm Springs Tennis Club.

The couple worked quickly on their renovation. They called on Chris Neil of PSI  General Contractors and other vendors with whom Theilig and her firm, IN:SITE Design Build Associates, had worked on Palm Springs projects. 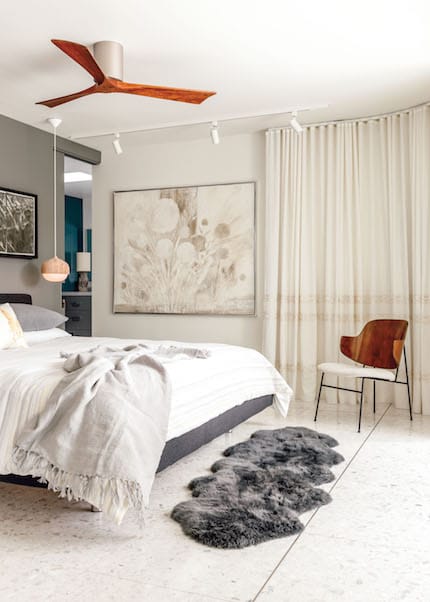 The entrance to the master bedroom  was raised to match the height of the home’s double-door front entry.

When the Plaza Racquet Club closed, owners Kurt and Ana Haggstrom had offered the contents of the pro shop, as well as some of the pavilion’s furnishings and fixtures, for salvage. Theilig admired the square oil-rubbed bronze light fixtures that had graced the club’s pavilion and told the Haggstroms she would love to repurpose several. “They are the perfect lights for our exterior eave,” she says, “and bridge our early and current love of tennis and remind us every time they shine of how we loved and appreciated the Plaza.”

The couple worked with Hot Purple Energy to install 36 solar panels on the unit’s roof. They took the place down to its studs and ripped out the wall-to-wall beige tile, along with the cabinetry, fixtures, and appliances, and donated them to Habitat for Humanity.

When they had first seen the space, they recognized that it needed to be opened up to create the welcoming, timeless atmosphere they had in mind. The house obviously had excellent bones, and its flow and feel were improved by opening the midcentury floor plan with minor but strategic alterations. Unneeded doors were removed, and unused ceiling space was captured in the guest bathroom and laundry. The smallest bedroom, which has 10-foot-high ceilings and beautiful views of the mountains, was converted into a cozy den and office, separated from the living room by a floor-to-ceiling, wraparound walnut library wall.

They took the place down to its studs  and ripped out the wall-to-wall  beige tile, along with the cabinetry, fixtures, and appliances, and donated them  to Habitat for Humanity.

Theilig gave the original bathrooms, which she describes as “dark and cloistered,” a luminous spa-like feeling by replacing old fixed skylights with new, operable ones. The doorways into the bedrooms, guest bathroom, and laundry room were raised to match the height of the home’s elegant double-door front entry, and new stainless-steel, period-appropriate hardware was installed, including custom steel pocket-door hardware on the closets.

The kitchen and attached dining room were expanded into an open chef’s kitchen that is bright and airy, and, with its convivial dining island, perfect for entertaining or a relaxing post-tennis lunch for two. Theilig installed large-scale terrazzo tile throughout, admiring the large chunks of aggregate that keep the floors from appearing too busy. She continued the terrazzo outdoors to several patios that appeared to have languished unloved for decades. Emphasizing the indoor-outdoor flow gave these spaces new life and transformed them into intimate outdoor rooms the couple use during sultry summer nights. 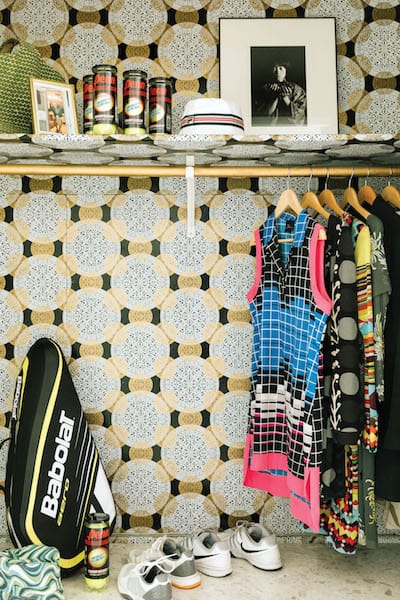 A closet is filled with desert fashions and tennis detritus.

Theilig transformed the living room into a space with an easy elegance that invites lingering. The focal point is the fireplace, which Theilig wanted to have depth and texture, to “feel old, maybe original, but not recognizable as vintage or contemporary.” Again, she turned to wood, a material that would warm up the cool terrazzo floors and provide the floor-to-ceiling textural element she sought. She enlisted Parnell Pollioni, her “favorite woodworker, craftsman extraordinaire, and frequent San Francisco creative collaborator,” to work with her to create a locally sourced walnut surround for the fireplace. They came up with three shapes in three dimensions that could be reconfigured in multiple ways to create an interesting texture and, with their curves and circles, capture the organic Brazilian modern aesthetic. An elegant fire screen with a pattern of intersecting curves and circles, based on a design she’d seen on an episode of House of Cards, complements the surround.

Most of the home’s interior walls are a warm off-white, but here and there she introduced accent walls — a golden ochre in the guest room, a warm gray in the kitchen and hallway, and a lighter gray in the master bedroom — that complement the curtains, upholstery, and collection of art, both vintage finds and contemporary pieces. A blue-green wall above the built-in desk in the den is the perfect backdrop for a jaw-dropping display of some of the 100-plus vintage wood tennis rackets Theilig has somewhat obsessively collected over the years. More rackets are casually housed on an upper shelf of the living room’s library wall.

“When Rob and I were visiting his parents in Cincinnati once, I found his old Rawlings racket,” she explains. “I love the wood inlay and graphic details of the early rackets and, in some ways, they remind me of vintage guitars. I really love the rackets that have pictures of the players on them, and there are some  pretty funny pictures. So, Rob’s ‘John Newcomb Court King’ Rawlings racket got me started on this obsession about six years ago.” 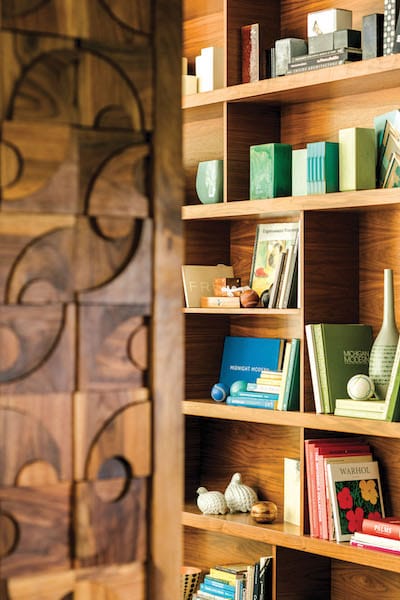 “I really love the rackets that have  pictures of the players on them, and there  are some pretty funny pictures. So,  rob’s ‘John Newcomb Court King’ Rawlings racket got me started on this obsession.”

The only interior finish Theilig kept is the midcentury wallpaper in the front hall closet. Its motif of lacy, overlaid circles echoes the pattern Theilig created with her rackets.

Four months after they took ownership of the home, Theilig was ready to begin furnishing it. The curved living-room sofa by Minotti was the start; it had the lines they wanted and from it one can see the kitchen, the fireplace, and the secret TV behind a painting that slides over the bookcases to reveal it. In the master bedroom, the bed had originally faced the living room, so they moved it, backing it up to a new wall of closets with Jack-and-Jill doors, and now have a beautiful view of Albert Frey’s Frey House II and the two Hugh  Kaptur houses down the hill. The guest-room bed was also re-oriented to maximize mountain views. Most of the furniture in the house, like the art collection, is a mixture of  vintage finds — by the likes of McCobb, Eames,  Nelson, and Knoll — and contemporary pieces from Italian houses such as Minotti and Donghia, with a smattering of blu dot, West Elm, and CB2 thrown in. 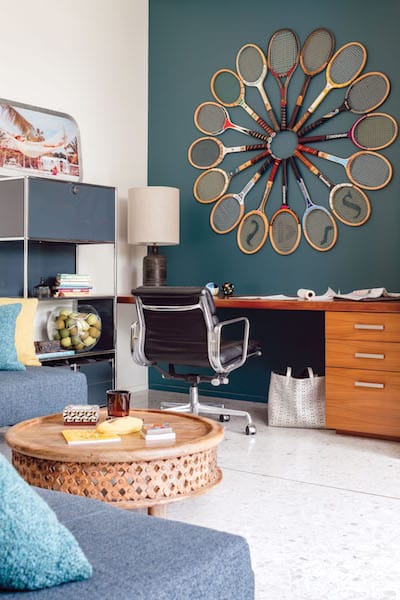 The couple moved into the condo in  September 2016 and have been increasingly spending time there, enjoying tennis matches at least four times a week, entertaining friends, and spending quiet evenings reveling in their beautiful “forever Palm Springs home.” They took a tired midcentury property and transformed it into one that is, like them, contemporary and warm, easy, social, and relaxed. What’s not to love?