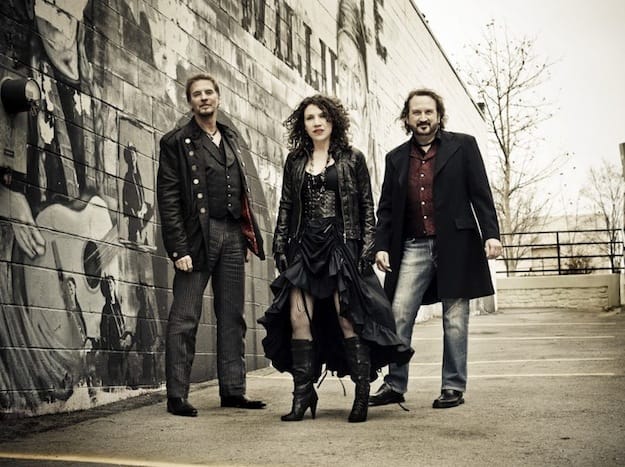 It’s good to be friends with Kenny Loggins.

Most of us will never know from personal experience, but for Georgia Middleman and Garry Burr, their acquaintance with the pop legend has been a fortuitous one.

“I think five … six years ago, Gary and I met,” Loggins recalls. “I was building a Kenny Loggins record for Target. In the process, we became friends. We discovered that writing together was a really easy process.  I thought that being in a band with someone like that would be a lot of fun.”

After some careful consideration, however, Loggins felt in his gut that the chemistry was missing a key element.

Burr brought songwriter and vocalist Middleman on board and according to Loggins: “The rest, shall they say, is history.

Since Blue Sky Riders’ auspicious beginnings, the trio has landed on the must-see lists of concertgoers and become the topic of widespread Internet buzz and adulation. Following recent stints at the famed Sundance Film Festival in Park City, Utah, as well as Austin’s SXSW Music festival, Loggins, Burr, and Middleman were gifted with a distinction that any band would be honored to have.

“We were voted among one of the top five bands not to miss when we were at SXSW. Which is a really strong feat considering out of a thousand bands, we were the only ones over 40,” Loggins said.

And, that accolade is even more telling, when you consider the number of country music ensembles rising up the charts, or achieving crossover success. There was a time when the solo artist was the king or queen of Nashville. But with groups like Sugarland, The Band Perry, and Lady Antebellum stealing fans’ hearts, it makes you wonder what aspect of Blue Sky Riders’ formula has managed to endear it to audiences. Burr has a theory:

“I think every kid grows up thinking about starting a band with his buddies,” he muses. “And when you have a band up on stage, and there’s more than one person that’s the focal point, and two or three people are up there having fun, [the audience] can really can see what it’s like being up there with your friends, creating something with the amps behind you and the crowd in front of you.”

Now, as Blue Sky Riders gears up to play Stagecoach Music Festival and an accompanying show at Pappy & Harriet’s Pioneertown Palace April 27, each member looks forward to bestowing their music on an expanding fan base. With excitement looming heavily in the air, Middleman will more than likely utilize one of Blue Sky Riders’ songs as her mantra for the day.

“My favorite song, I think, right now, is ‘Feeling Brave’,” she admitted. “It’s so primal. And it’s so funny, because I was recently on our Facebook page, and one of our fans wrote, ‘I’m getting married today and I just played ‘Feeling Brave’ and I thought to myself, “Yeah!!”

Still, it’s Loggins’ enthusiasm that makes each ticket sold for the Stagecoach and Pappy’s appearances, worth their weight in gold.

“It’s been kind of exhilarating for me to get the chance to start over again,” admitted Loggins, who is riding high – this time, with a little help from his friends.