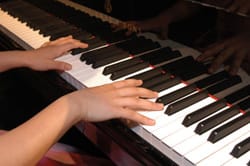 Tired of driving to Los Angeles to hear classical musicians, Kathryn Hull thought, “Instead of me going there, I will bring them here.”

That was 10 years ago when the music teacher and Steinway Society board member began Encore!, a series of four to five concerts a year in private desert homes. Hull maintains a mailing list of 400 (she adds about a dozen names each year) and attracts an average of 50 people to each performance.

“I don’t get many students, which I feel disappointed about,” she says. “Because when I have a young pianist doing amazing things, I think students should be there.”

This month and next, Encore!, the Virginia Waring International Piano Competition, Steinway Society, International Classical Concerts, and Rancho Mirage Public Library offer ample opportunities for an increasing number of classical music fans to hear technical and artistic brilliance among young pianists from around the world.

Michael McCafferty, who serves on the Virginia Waring board, has hosted Encore! performances, as well as Virginia Waring competitors. Last year, three young pianists — one French, one Romanian, and one of Korean descent — stayed with him. Although McCafferty began piano at the age of 7 (he’s now 68) and won a Louisiana statewide concerto competition, he gets more from hosting today’s young musicians than a trip down memory lane.

What he gets, he says, is “three children that I have adopted that I didn’t even know before they came.” He stays in touch with them, and Karina Sabac (the Romanian) has returned three of four times, during which she performed at the Rancho Mirage Library.
McCafferty also serves as president of the Friends of the Rancho Mirage Public Library, which raised money for a 9-foot concert grand piano that he says is “one of the finest Steinways that is made.” The library, which hosts International Classical Concerts performances, holds its own free recitals from fall to spring.

“The room holds 350 people. In every instance last spring, it was an overflow crowd,” McCafferty says. Last year’s Virginia Waring intermediate competitors (ages 13 to 17) attracted a particularly large audience. “It was more than standing room only. There were people outside,” McCafferty recalls. “For the most part, we are tapping into the resources from the Virginia Waring experience, because all of these are talented people who need encouragement.

“The [competition] has given us a reservoir of talent that we would not have had,” he adds.

“My piano students were encouraged, because they said, ‘I never heard piano like that before.’ … They’ve heard classical music, but they don’t hear six- to 10-minute long pieces with movements. That was a wonderful opportunity.”

One of Penna’s students, 17-year-old Robert Islas, not only has gained confidence with the ability to read music, but also has begun composing. His recent sonata, he says, tells “how I feel, what I am going through in my life.” He calls an earlier piece dedicated to his mother after her death last summer “a memory song that I can always play to remember her.” Islas is fortunate to be in one of the few music programs in the school system.

“I think we all bemoan the fact that we are not teaching music in the schools, and we do what we can to encourage young people in their musical pursuits,” McCafferty says.
“This year for the Virginia Waring, we will do all we can to encourage youth attendance. All of the competitive events except the very final performances are free, and we are trying to let schools know, music teachers know, so that they can bring students to hear these remarkable people play and see what is really possible.

“It is my fervent belief,” he says, “that music is one of the most significant elements of our civilization and that the listening experience is a big part of it. But the study and performing of music prepares young people for all sorts of disciplines that will lead them to productive lives and rewarding lives. If they have had exposure to music at a young age, it will just enrich their lives forever.”

Islas hopes to earn a masters degree in music and become a music producer.

“When I play,” he says, “it makes me think about my future and where I want to be. I want to be successful in life.”