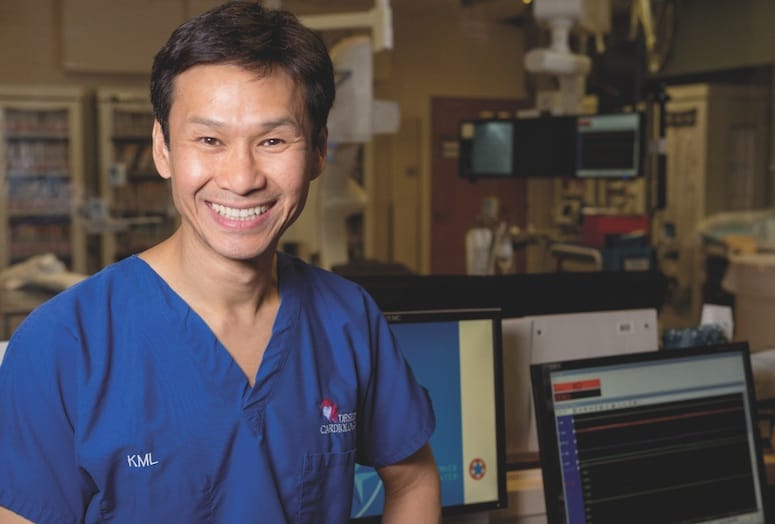 Growing up in Vietnam during the war years, Dr. Khoi Le saw firsthand the need for good medical care.

He was attracted to what he calls the “adrenaline, middle-of-the-night-emergency” aspect of interventional cardiology. After graduating with honors from Harvard College and Harvard Medical School, he trained in his specialty at Massachusetts General in Boston and now serves as one of 13 cardiologists at the renowned Eisenhower Desert Cardiology Center.

Le always wanted to revisit Vietnam someday, though, and sought to acquire skills that would allow him to be useful even on short trips there. His vision was realized in 1997 when he returned to his birth country on a medical mission and performed Vietnam’s first stent procedure. (Interventional cardiology is a subfield of cardiology in which doctors use wires, balloons, and stents to open blocked blood vessels without performing open-heart surgery.)

He continues to teach there every year, and has also lectured and treated patients elsewhere throughout Asia and Central and South America. This summer, he will visit hospitals in Ethiopia.

Le also relishes an aspect of cardiology that he sees as the opposite of emergency care: the decades-long relationships with patients whose quality of life he’s been able to help improve.

“I’ve been in the desert for almost 20 years now, and I still have patients in my practice who came and saw me that first year I moved here,” Le says. “Every day when I look at my schedule, it’s like a series of reunions.”

Three years ago, Le and his colleagues at Eisenhower Desert Cardiology adopted a method of inserting stents through patients’ wrists instead of through the femoral arteries in their groins. This advance has led to vastly easier recoveries, dramatically lower complication rates, and greater patient comfort.

“Patients can get up and walk right away,” he says.

The doctor also takes an active role in education at his practice: “Much of heart disease is avoidable,” Le says.

“I would love to get my patients to commit to a healthy life style with a proper diet and daily exercise. I’ve challenged myself to eat right and to sweat 365 days in a row. Imagine if we could all do this together as a community.”

Le sees heart attack prevention as a joint effort that involves both the public and fellow clinicians.

“I’m fortunate because I’m part of a superb team at Eisenhower and at Desert Cardiology where we have the skills and we have the patients’ attention,” he says. “Our goal is to give people meaningful quality of life and hopefully extend their years of living independently. That’s very rewarding at the end of the day.”