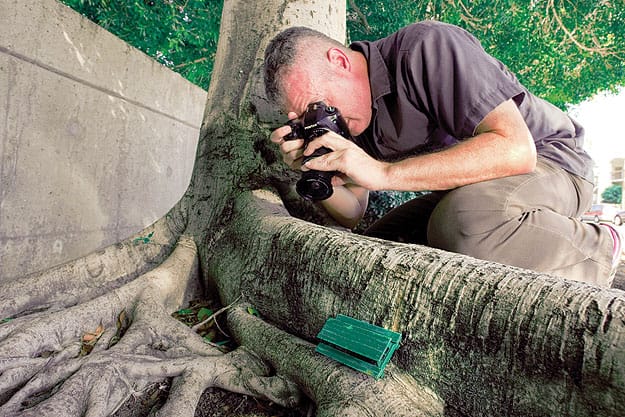 Travis Hiner bends over gnarly tree roots along Tahquitz Canyon Way a block west of Palm Springs’ main drag. He picks up a few fallen leaves and tosses them aside. Then he opens a box and unwraps a miniature picnic table, which he places almost vertically against the exposed roots. He picks up his Pentax, crouches, and starts shooting pictures. After several shots, he picks up a semi-fisheye lens and holds it against the standard camera lens.

“This really makes the table look life size,” he says.

Passersby look with curiosity. But the sight of a man crouched over a tree root proves too strange for one inquisitive couple. Carrying an impressive-looking camera himself, the man walks over to see the mini picnic table.

“Oh, wow. That’s too cool,” he says. After asking Hiner questions about what he’s doing, he concludes, “That’s serious.”

Graphic designer by trade and multidisciplined artist by nature, Hiner (who goes by the name Suboken for his paintings, sculpture, photography, and music composition) has shot about 2,000 images of 1/24th-scale and smaller picnic tables in outdoor settings. He selected 96 to publish in a coffee-table book titled In a Place, one copy of which he’s had printed. To pay for copies he can sell, Hiner turned to the crowd-funding Kickstarter website (see “What It Is”).

“A friend knew I was trying to self-publish my book,” Hiner says, explaining his introduction to the site. While viewing other artists’ projects on the site to see how they did it, Hiner became a backer for four of them. He posted his own 60-day campaign on Sept. 6 with a goal of $17,000. Within two hours, he had his first backer: a woman in Cathedral City.

“My first donation was my mom,” Hiner says. “She was so excited, but she’s not very Internet savvy, so [my wife and I] drove over to walk her through it. She was near tears; she wanted to be the first. We looked away when she put in the dollar amount. I didn’t want to pressure her.”

In the beginning, Hiner checked the status of his fundraising effort every four hours. He later curbed his need to visit his Kickstarter page to once a day.

“My first surprise was when Kickstarter made me a staff pick,” Hiner says. “I was riding on that one a few days.”

To help drive traffic to the site, Hiner and his wife, Calista, announced the campaign on Facebook, LinkedIn, and Pinterest. They also printed cards to hand out at gallery shows.

Hiner traced interest in his project to San Francisco and the desert (places where he has lived and knows people), Canada, New York City, Chicago, Seattle, London, and Germany. He had a backer from Texas and two from Connecticut. His largest donations were two $200 pledge, but he still fell short of the goal. So he now plans to produce 10 to 15 signed and numbered standalone prints of 24 images.

“If the prints are a success in generating funds, I can invest in printing the book version,” Hiner says. Meanwhile, he’s focusing on a sculpture project he’s been developing over the past few years called The Osteodontokeratic Hammer.

“It appeals to a much smaller audience than In a Place,” he says. “That seemed to be the most accessible of my artwork,” he explains, “and the best to make a name for myself.”

After graduating from Palm Springs High School and taking art classes at College of the Desert, Travis Hiner moved to San Francisco to attend film school. From there, he moved to Toronto, Canada, to work as a makeup artist in the film industry.

It was there, 10 years ago, that he was hiking one day and came across a lake with a picnic table surrounded by ankle-high water. The oddity planted a seed in his brain. Since then, he has made 28 miniature picnic tables (two sizes and in a few colors) and created his own non-picnic park environments by photographing them to look life size.

“When I was growing up, I watched sci-fi movies,” he says. “They were working with miniatures. I always wanted to get into that.”

His most unusual settings have been underwater ones. He averages about 300 digital shots per image, and he has saved them all (on a six-terabyte drive that is now about half full).

“A lot of the pictures are shot sideways or upside down,” he says. “Fifty percent are at an angle. It forces me to have that perspective. The ones that didn’t excite me were the ones where the table is flat.” When necessary, he uses a glue stick to “hang” a table.

“At first, I was going to make prints, but there was a huge catalog of images that would never get seen,” he says. However, he figured, images that weren’t strong enough to stand alone in a print would work as part of a collection in a book.

For a photograph for this article, Hiner scouted a location among plantings across the street from Palm Springs Art Museum. Returning on the day of the shoot, he discovered landscapers had cleared the spot bare. It wasn’t the first time he’d lost a setting.

“Weather tears them apart or landscapers come through, which got me in the habit of carrying picnic tables everywhere I go so I can capture the shot I want,” he says.

Of course, he could use Photoshop to create any illusion he wanted, but that would eliminate the art of what he does. As one impressed passerby noted when he asked Hiner about how he would make one of his tables loom large on the root of a tree, “If you don’t use Photoshop, you are a really good photographer.”

Travis Hiner’s Kickstarter campaign ended in early November, but you can follow further developments by visiting his blog at subokenproject.wordpress.com.

In August, Schonberg and Treadway posted a Kickstarter campaign to raise funds for the project they titled Hits of Sunshine. They exceeded their $7,977 goal by $48.

“Grants are for individual artists, or you have to have a 501(c) [nonprofit status],” Schonberg says. “Kickstarter gives you a good platform to really show what you are doing. … I felt [Hits of Sunshine] would appeal to people in a lot of different areas, because it combines music, fashion, and art.”

First, they had to come up with a budget that would cover expenses for themselves, three contributing artists, and a videographer, as well as the cost of rewards for contributors. They slightly adjusted the number to coincide with their birth years (’79 and ’77). Then they gave themselves 21 days to secure the necessary donations. Kickstarter officials claim a campaign of 30 days or less creates a greater sense of urgency.

“It’s true,” Schonberg says. “We got most of our donations at the end.”

In the beginning, they sent out mass e-mails. Later, they sent personal reminder e-mails to those who had not yet contributed. Many were local Secret Drum Band fans and acquaintances they would see around town.

“They would say, ‘I have been meaning to donate; I keep forgetting,’” Schonberg says. “Rather than feeling I was hassling people, they were really excited about our work and wanted to support us.

“[Kickstarter] is a new way of supporting an artist,” she continues. “We are used to charging a cover charge at the door; but this is, ‘We are going to do this thing in a couple months, and you are getting something in January or February.’”

While the largest contribution was $2,000 from someone they knew, the bulk of donations were in the $30 to $40 range.

“I expected most people to contribute $5,” Schonberg says. “I was amazed. About 20 supporters donated without asking for a prize. There’s also a category of people who just said, ‘Send me a postcard from Joshua Tree [the reward for a $10 donation], and here’s $200.’”

If one thinks she is suggesting that Kickstarter funding falls within the realm of “easy money,” she acknowledges that it involves hard work — in budgeting, creating a compelling video, tracking donations, and communicating with backers — and a certain degree of nail biting.

“There’s a bit of anxiety going through the process,” Schonberg says. “It integrated into every aspect of our lives, because it is all or nothing.”

Established in 2009, Kickstarter provides an online venue for individuals to crowd-source funds to accomplish creative projects (arts, design, and technology). Each project is posted with a monetary goal and length of time (one to 60 days) to raise funds. Artists offer a range of rewards for various donation levels. If donations fall short of the goal, the project is deemed unsuccessful and backers’ credit cards are not charged. Projects may be posted for free, but Kickstarter collects a 5 percent fee from funded projects, and Amazon charges credit-card processing fees of 3 to 5 percent.