Dispatches from the Desert 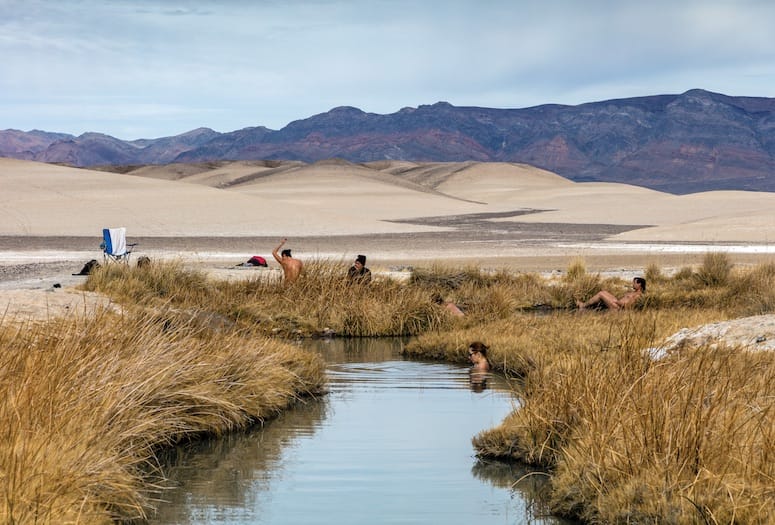 Bathers at Tecopa Natural Hot Springs Tecopa, California (2016). The hamlet of Tecopa, known to desert travelers for its exceptional mineral hot springs, lies in an otherworldly realm of mud-encrusted badlands along State Route 127 at the eastern side of Death Valley National Park. Tecopa features several Spartan spas where one can take the waters. Over the years, its natural mineral springs and commercial spas have become popular with vacationing Korean Americans, who are known for their social bathing culture.
PHOTOS COURTESY OF KIM STRINGFELLOW

It was a sticky, hot August evening when Kim Stringfellow set down her laptop and fired up a PowerPoint presentation in the clubhouse space at Ace Hotel & Swim Club in Palm Springs. She came to tell a group of about 40 die-hard lovers of the desert about the fascinating saga of Earl P. Dorr’s Lost River of Gold, a conjectured Mojave Desert gold strike of epic proportions still sought to this day by an eclectic and persistent group of quixotic prospectors. Throughout the presentation, Stringfellow — a Joshua Tree–based photographer and associate professor at San Diego State University’s School of Art + Design — referred to one of her field dispatches in The Mojave Project, her multimedia documentary and curatorial initiative that recently published a two-volume reader.

The Mojave Project materialized over time, through research and reportage, as well as photography and video. Dispatches, shared through mojaveproject.org and KCET’s Artbound series, fell into eight thematic categories, ranging from Sacrifice and Exploitation to Transformation and Reinvention. The four-year project culminated as a large-scale video installation incorporating the field dispatches, photographs, documents, maps, and a variety of objects and ephemera.

Meanwhile, Stringfellow exhibits and speaks about the work all over Southern California, including as part of the exhibition Made in the Mojave earlier this year at Lancaster’s Museum of Art & History, and next in a fall 2018 exhibition at Los Angeles Contemporary Exhibitions.

For Palm Springs Life Arts+Culture, Stringfellow selected some of her favorite images and anecdotes. 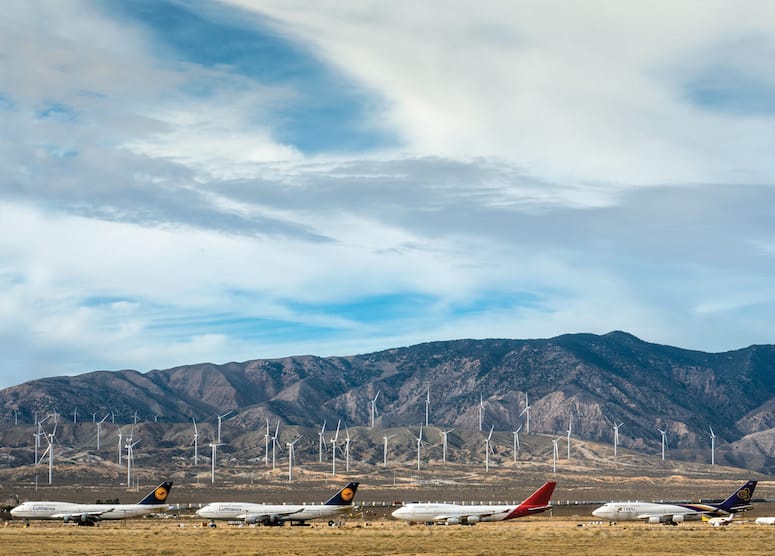 The Mojave Boneyard, located about 95 miles north of Los Angeles at the Mojave Air and Space Port, is a final resting place for defunct airliners waiting to be scrapped or cannibalized for spare parts. Here, at the farthest western edge of the Mojave Desert, test pilots are schooled and commercial aerospace companies proliferate, including Virgin Galactic and Scaled Composites. This image illustrates the confluence of the region’s aerospace industry, alternative energy production, and container rail shipping pictured on the desert floor against the rise of the Tehachapi Mountains. 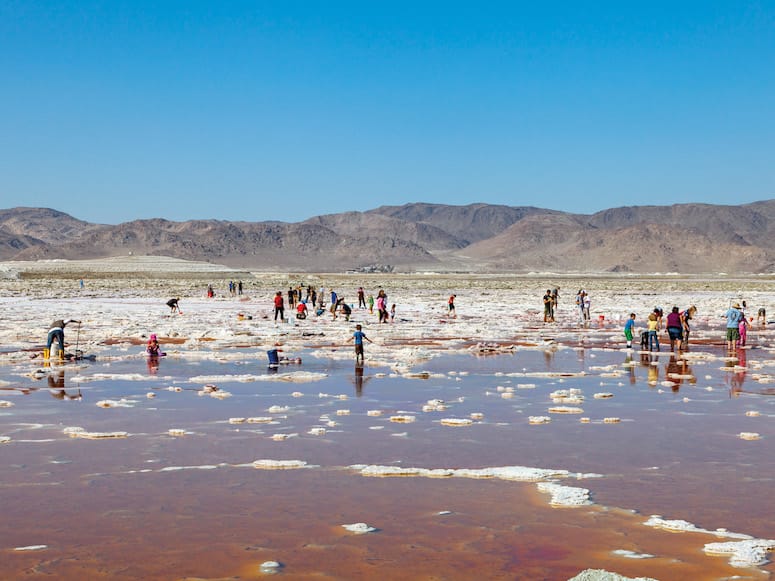 Every second weekend in October, for 75 years and counting, Searles Valley Minerals hosts Gem-O-Rama, a gem- and mineral-collecting extravaganza open to the general public at Searles Lake in the tiny chemical manufacturing town of Trona (population 2,742). On these weekends, the town doubles in size with enthusiasts and elementary school children and their parents. In this photograph they’re collecting prized pink halite, a cubic-shaped saline mineral crystal colored by salt-loving bacteria present in the lake’s briny waters. 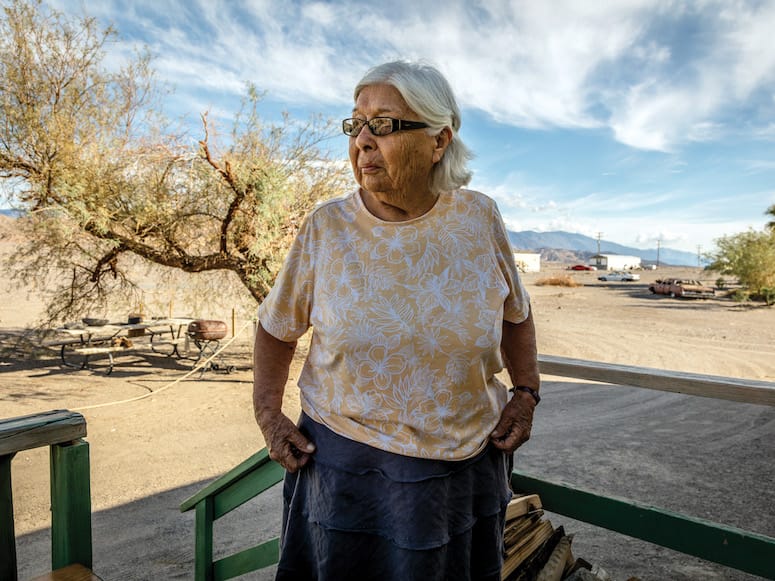 Death Valley’s indigenous name is Tüpippüh, given to the land by its original inhabitants, the Timbisha Shoshone. When Death Valley became a national monument Feb. 11, 1933, it was done so under the presumption that this “uninhabited” wilderness had no permanent residents — a determination that conveniently discounted the Timbisha who have resided here from time immemorial. Timbisha activists including Pauline Esteves, 93, challenged the federal government’s authority to deny them recognition as a sovereign nation until 1983. In 2000, Timbisha were finally awarded their permanent land base within the boundaries of the national park. 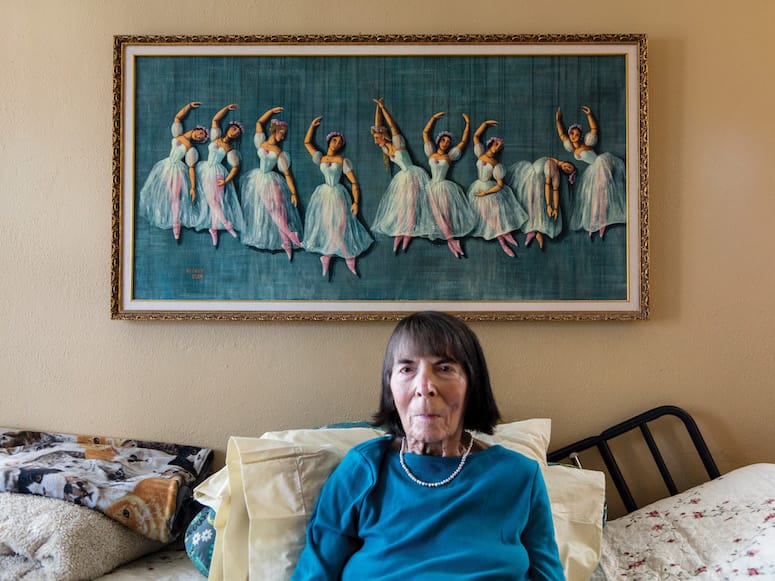 Artist and ballerina Marta Becket (1924–2017), the doyenne of Amargosa Opera House, and her husband were stranded after their car broke down at Death Valley Junction in 1967. A peek into the town’s abandoned meeting hall forever changed her life. She ended up transforming the space into a theater with glorious murals depicting a 16th century Spanish court where she performed for almost 50 years. 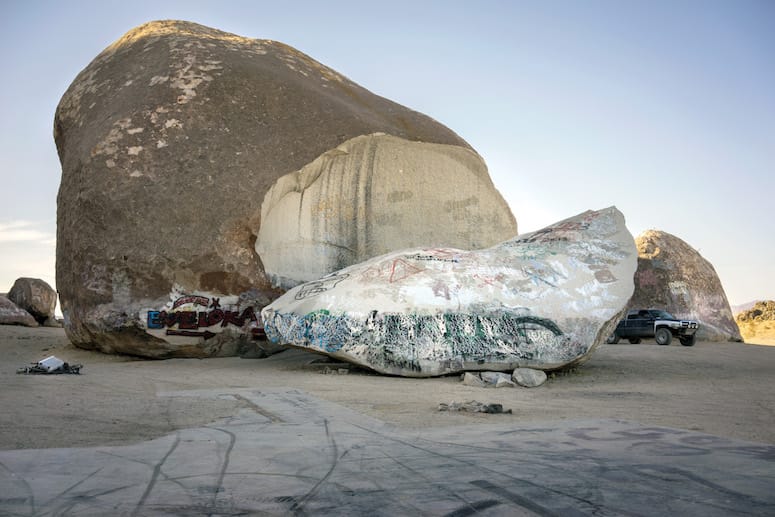 Giant Rock is a massive freestanding boulder just north of Landers, speculated by some to be the largest in the world. This sacred ancestral Native American ceremonial spot became legendary in the late 1950s and ’60s as the location of George Van Tassel’s popular UFO convention. An underground domestic dwelling originally excavated by eccentric prospector Frank Critzer was sited beneath the boulder. Van Tassel, a friend of Critzer, took over the public land lease after Critzer died in a mysterious blast during a 1942 police raid. Eventually Van Tassel, a former flight test engineer, built an airport adjacent to the site and opened a café in Critzer’s former subterranean home called the Come On Inn. Not far away Van Tassel began construction of the Integratron, a domed, wooden, nail-less “rejuvenation machine” popular today with tourists for its relaxing sound baths. In 2000, the boulder cleaved in two pieces signaling for some the coming of a New Age. Others suggest that heat from the bonfires of partying off-roaders or even Critzer’s ghost caused the rock’s foreboding fissure. 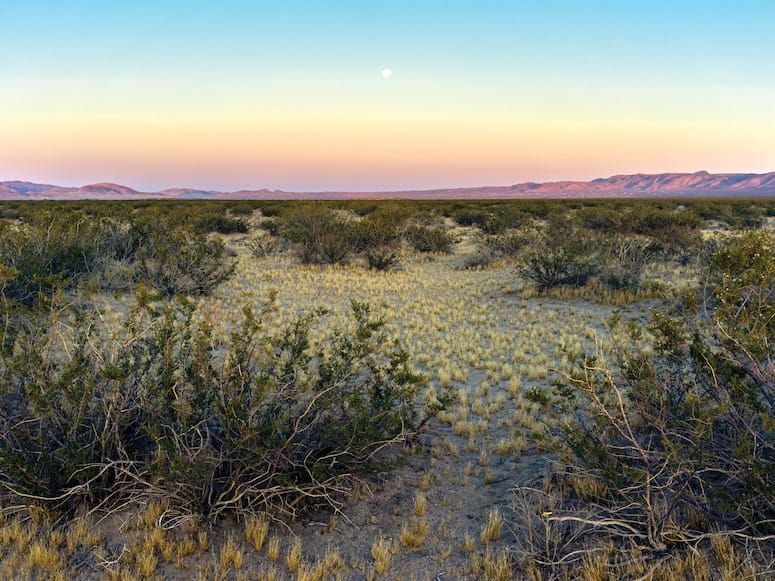 In a few unspoiled areas of the Mojave Desert the ubiquitous creosote (Larrea tridentate) has persisted for thousands of years in its clonal form. The most famous specimen known within these rare clonal colonies is King Clone, a 22-by-8-meter creosote ring in Lucerne Valley estimated by botanists to be around 11,700 years old. It was identified and carbon-dated by Dr. Frank Vasek of the University of California, Riverside, during the 1970s. Vasek’s discovery illuminated profound evidence on what we consider life itself: Rather than limiting mortality of an organism to the lifespan of a single plant, these clonal species suggest something  vast and existential. 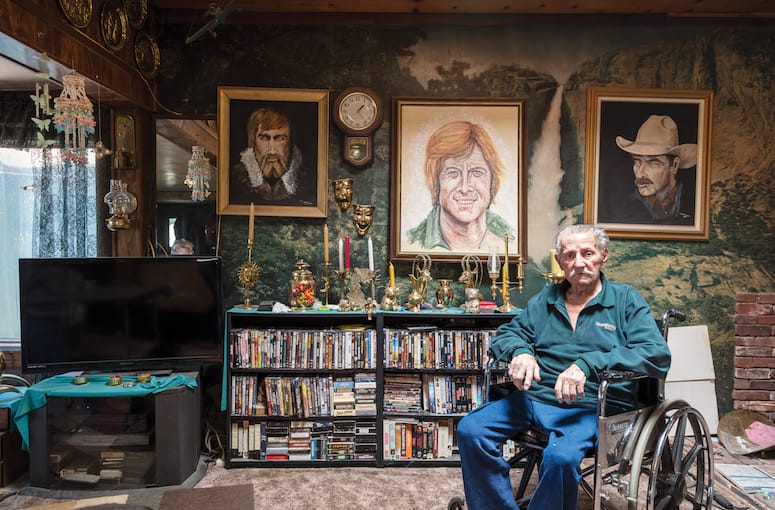 Self-taught Darwin artist Monty Brannigan at his home shown with his portraits of Charlton Heston, Robert Redford, and Tom Selleck. Darwin is a tiny community west of Death Valley with 35 full-time residents. During its heyday in the 1870s, Darwin was known as a hardscrabble silver boomtown boasting 3,500 residents, 60 mines, five smelters, seven saloons, and not a single church. The mine itself remained active until recent years.