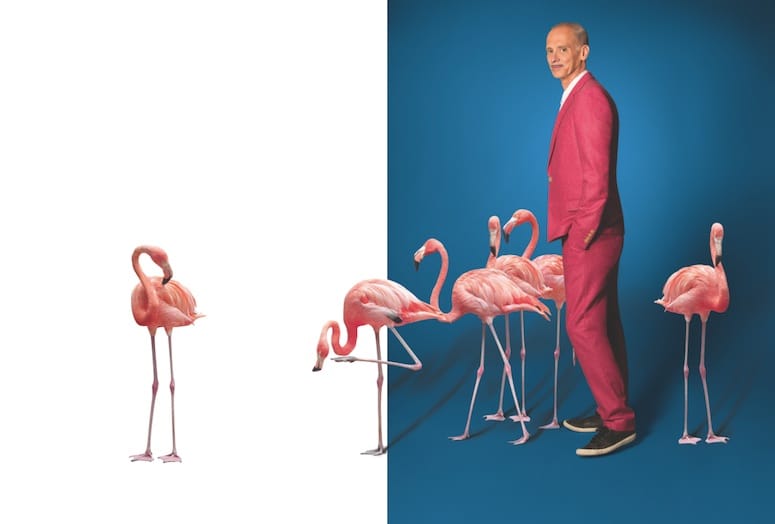 John Waters embraces the world. The whole world. Not just the beautiful parts, the ones we all take a shine to. The filmmaker appreciates those, of course. But his range of other likes astonishes. He find very little about human beings to turn him off.

And thank goodness for that. Without Waters’ nonchalance, for example — exhibited in his early films Pink Flamingos, Multiple Maniacs, Female Trouble, and Desperate Living — and without his accepting demeanor, would we ever have seen a 370-pound transvestite find nutrition just lying around on a sidewalk in Baltimore? Would we have witnessed a baby in a refrigerator? Would we ever have imagined a television station quite that narrow-minded? And would we have had the chance to meet such unorthodox beauties as David Lochary and Edith Massey?

The writer William S. Burroughs may have called Waters the “Pope of Trash,” but if it’s trash Waters is anointing, it’s stuff that never gets thrown out. His movies play on and play on, sometimes at midnight in small nabes, other times at a retrospective like the one the Film Society of Lincoln Center, no less, showcased recently.

The desert gets a chance to gain his embrace this month at the McCallum, for Waters is coming to town Dec. 2 with his one-man Christmas show. We caught up with him a few months prior while he was still honing the lecture.

Let’s get the promo out of the way. What can people expect when they come to A John Waters Christmas at the McCallum?

It’s stand-up comedy. I do 70 minutes. Without, I want to point out, any notes. I mean, people are paying money; I can’t take the time to memorize?

Simply that I love Christmas, I love the fake blue Christmas balls in Hollywood, and I want to reclaim it as jazzy and cool again.

You have a CD called A John Waters Christmas with sides like “Santa Claus Is a Black Man” and the Chipmunks’ version of “Sleigh Ride.”
I play those songs as people are coming in.

Two of the tunes are by somebody named Fat Daddy.

Fat Daddy was the host of the teenage dance show that I based Hairspray on, but not the regular one. Fat Daddy was the host the only day black kids could appear. I called it “Negro Day” in the movie, but I think they really called it “Guest Day.” Fat Daddy dressed very opulently; he had a cloak and he wore this crown that looked like the one from the Imperial margarine commercials.

Seems like your kind of subject. Everything seems to interest you. Are you ever bored?

I’m never bored. I don’t get how people are bored. You’re bored? Go out! Get out there!

It was like being filthy and respectable at the same time. I mean, I felt like I was at my own funeral and I could hear all the comments.

Your work is always about opposing forces facing each other. There was Divine in Pink Flamingos vying with the Marbles on being filthy; in the Johnny Depp movie Cry-Baby, he was part of the rockers fighting the squares; Hairspray pit one gutsy gal against the whole Baltimore media establishment. And in your new book, Carsick, you present three different opposing versions of your hitchhiking trip. There’s usually a struggle. [Note: The book, Carsick: John Waters Hitchhikes Across America, describes three trips — the one he wishes he had taken; the nightmare trip he’s glad he didn’t take; and the rather pleasant, uneventful trip he really took.]

The struggle is the tyranny of good taste crashing down on people that I fight against. It’s what I noticed while hitchhiking; this is how these people really live. I watch their behavior and am really interested in their stories. They were very unpredictable no matter what their politics were. I was amazed at that. You can’t always tell what their politics are. Depends on if it affects them. Until they know someone and they try to understand it — then they’re less judgmental about things.

How is the book selling?

Why bother? I made 17 movies, and they’re all easy to get. My audience keeps getting younger and younger, and I was thinking I shouldn’t do any more. I’ve been resting. Movies now are made for China; there are no more movie stars and no good comedies, because every country’s humor is different. So we’re stuck with these tent-pole movies. I tell kids to go to those movies, sneak in, drink ipecac, pass it around, and vomit in the theater. Or bring along a horn for every time there’s a product placement.

Speaking of no more movie stars, can we have a moment of silence for Polly Bergen? [Ms. Bergen appeared in Waters’ rock-star movie, Cry-Baby, along with other unusual casting choices such as Pia Zadora, Joey Heatherton, David Nelson, Patty Hearst, and Joe Dallesandro.]

Polly was so great. Tough broad and also a lady. She would gamble with the Teamsters on set and have tea with high society later. A great actress. You know, she started as a country singer.

You’re the man for music trivia. Your soundtracks are like a treasure map for great music. You like all of it, don’t you?

Except jazz. I always thought you had to have a real familiarity with heroin to enjoy jazz. When my mother was dying, they had her on morphine. I thought, “Finally, she’ll be able to enjoy Coltrane.”

[Pause.] Anyway, you’re sort of like Clint Eastwood, filling your movies with great music. You know him?

I met Clint once. Me and him together are like Dirty Harry next to a cheater. … That’s a fake vagina that drag stars wear. Divine hid his pot in his, and when the customs people saw it, they were too scared to even open it.

One final question: What brand of eyebrow pencil do you use for your moustache?

Maybelline! I keep telling them to use me in their commercials. I toss them out at performances. McCallum patrons, you’ve been warned.