'Koch' Reveals Much about the Man, the City 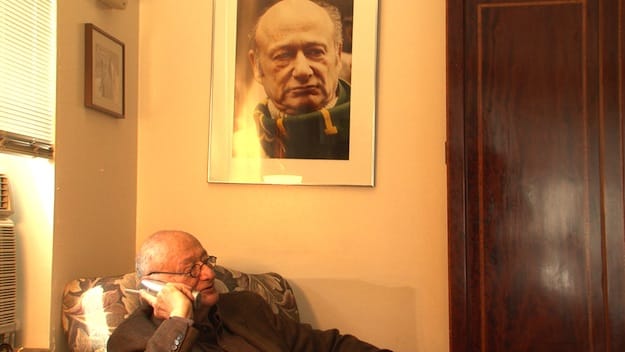 About a year ago, director Neil Barsky (pictured below) accompanied former New York Mayor Ed Koch, then 87, as he readied for his weekly radio show. It was a Friday, early evening.

“Two minutes before he’s supposed to go on the air, he has his eyes closed. He was napping. Like he's out of it," Barsky recounted Thursday after checking into his hotel in Palm Springs.

"As soon as that light came on, it was like Rush Limbaugh meets Bill Clinton on air. His ability to engage on a multitude of topics, to win arguments, to be a bully, to be charming. I think, like New York Times writer Joyce Purnick said, 'the public is his life'." Barsky's documentary, "Koch", began as a story about a pivotal period in New York politics that saw the city rise from its own fiscal cliff. At the center of that story is Koch, who served three terms as mayor from 1979 to 1989. The film is one of the more anticipated documentaries in this year's Palm Springs International Film Festival, premiering at 7 Friday night (Jan. 4) at the Palm Canyon Theatre, 538 N. Palm Canyon Drive.

Barsky said he has been to California several times, but never to Palm Springs. He's hoping the screening here will lead to building an audience for the film outside of New York in the coming months when it begins its commercial release. "Koch" is slated to be shown in Palm Springs starting March 8 at the Camelot Theatres.

Barsky is a newcomer to filmmaking. A former newspaper reporter for the New York Daily News and the Wall Street Journal, Barsky made the leap to hedge fund manager. He retired in 2009 and began a path that led him to "Koch". He shared some of that journey with Palm Springs Life.

How did you compensate for your inexperience with filmmaking?
"I spent six months meeting with everyone I could about documentary film. People were very generous with their time. Having come from the financial world, I think people saw me as a prospective partner. Everyone I teamed up with knew what they were doing. That was really important. Even though I felt I knew what kind of movie I wanted to make, I really didn’t know how to make it. That was true in the beginning, middle and all the way through to post production."

How did you approach Koch about doing this documentary? I would have thought he would have been approached before.
"I’m not sure about that. He’s written about 18 books. All autobiographies. So he’s not like he’s a life unexamined. That’s an exaggeration, but only slightly. I approached Ed’s chief of staff, Diane Coffey, who is in the movie, but before that I had a couple of friends call her and let her know I was going to contact her and that I was OK. Diane is a very, very protective of Ed. She’s been with Ed like 40 years though she hasn’t worked for him for years. I told her I wanted to understand how New York got this way. There is this personal issue hovering over Ed Koch (his sexual orientation). I will not report it any further than he owns. But if he wants to talk about it, we’ll talk about it. We didn’t go any further. We weren’t investigating Ed. That led to she, Ed and I meeting in his office. We talked for like 10 minutes and he said let’s do it. No conditions. No rules. I didn’t know what to expect. I have become very aware watching other documentaries when subjects are giving free reign and when they are not. I did approach this as a journalist first, and he’s very accustomed to dealing with journalists. There was nothing we couldn’t talk about. I think it’s very rare for a public figure to do that."

You address the gay issue surrounding Koch for most of his public life, but you don’t really answer the question of whether he is gay or not. Did you want to answer the question?
"I think we did answer it. I think we answered it by showing that his identity is as a public figure. I don’t even know anything definitely. I think we deal with it appropriately, which is some of the gay community was very outraged with him in his slowness to address the AIDS problem precisely because they were gay. It’s something he has lived with and been hounded by all of his life. He has taken a 1950s sort of tack toward it – it’s private and none of your business. He’s made trade-offs. If you asked him, he would honestly say he made the right decisions. It’s not for me to say, in my opinion, but it is relevant."

You mentioned in your press bio that Koch became angry at one point during the project and didn’t speak to you for months. What was the problem?
"He was mad because we had gone down the road a year ago to an almost complete cut, and then we realized it wasn’t working and we went back. He said, “That’s OK, let me see what you got,” and I said, 'No, because it wasn’t ready'. I think he felt we were holding something back. So then he starts saying, “Now I’m wondering, this is about trust.” I knew we would eventually finish. He didn’t block anything. We were just editing. When he saw the finished product, he realized we weren’t holding back on him. I think we were pretty candid with him the whole way. The film shows him at his best and his worst, but I think he’s used to that."

Did you believe the film was in danger when you weren’t talking to him?
"Not the film. We had shot most of it. I would rather not have an adversarial relationship with my subject. That was the risk. The risk was with Diane Coffey. She is quite formidable. I didn’t want to get into a conflict with Ed because then it could turn into a conflict with both of them, but it didn’t. I wouldn’t call it touch and go, but we were not in communication for four or five months."

Did you feel like you kept editorial control of the film?
"100 percent. He did have one issue, which was to see the film before we blocked, which we didn’t have a problem with. He and Diane saw it in July. He liked it. We breathed a sigh of relief. It was very important to me for the film to be independent and to be mine, and there was no question it was our work."

Where do you believe Koch's personality is rooted in?
"I think he was always infused with a lot of ambition, and a lot of integrity. Sometimes the ambition overtook the integrity. I don’t think we brought this out (in the movie) but everyone says this – Nobody worked harder. He did not have an obvious strong personal life. He would go to Fire Island, which is a vacation spot in New York, and he would have on a jacket and tie and only want to talk politics. He would go crazy. He would have to leave and get back to the city. By the early 1960s when he started out in politics, he was intensely focused and loved it."

Do you have another film in mind? What did you learn that could help you the next time?
"I really don’t. This time I bit off more than I could chew. Part of it was my inexperience. I think the scope was ambitious. It worked out OK, but I think I would do something less ambitious. I am reminded what attracted me to documentaries when you see something you don’t expect. What I like is Ed gets into a debate with a woman about abortion, shows his fangs and shows a side of himself that was not expected, or when he goes home at night by himself."