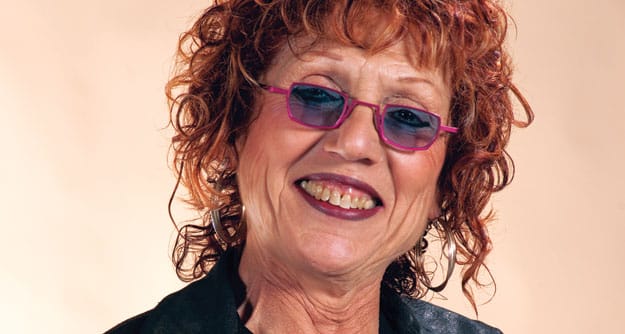 Just when she thought California art history had forgotten about her, Judy Chicago — a pioneer in feminist art and education — has returned to Southern California, including an evening in Palm Springs, to enjoy the recognition that eluded her for decades.

When L.A.’s “Cool School” emerged with artists including Ed Ruscha, Billy Al Bengston, Ed Keinholz, Wallace Berman, and others affiliated with the legendary Ferus Gallery in the 1960s, Chicago was making art equally bold, daring, and arguably more technically sound. But the prevailing gender bias of the day relegated her to the fringes.

Crosscurrents, a PST exhibition at the Getty Center, includes Chicago’s 1964 Car Hood. “It epitomized my situation at that time,” says Chicago, who now resides in New Mexico with her husband, photographer Donald Woodman. “The core imagery is of female forms impaled on a car hood. What could be a better symbol of the patriarchal and macho environment of L.A. in the 1960s than the car hood?”

Chicago might be best known for The Dinner Party, a monumental 1970s installation with hand-painted table settings dedicated to women in history. The Brooklyn Museum took possession of the piece in 2007.

Her subsequent work includes Light and Space and Finish Fetish art, as well as ethereal Atmospheres”earthworks, such as fireworks exhibitions that would leave a haze to blur, or feminize, the landscape. Last month, she participated in PST’s performance festival with a new pyrotechnic work, A Butterfly for Pomona. “Pacific Standard Time shows a diverse narrative about L.A. art rather than the singular one that’s known around the world,” she says.

Following her mid-1990s Holocaust Project, a painting and photography collaboration with Woodman, Chicago, now 74, began working in glass. “The Holocaust Project was very dark and difficult,” she says. “I wanted to end it with light and hope. Glass allows you to look below the surface; it’s a combination that’s very strong and very fragile.” Her newest pieces incorporate other materials, particularly porcelain and bronze.