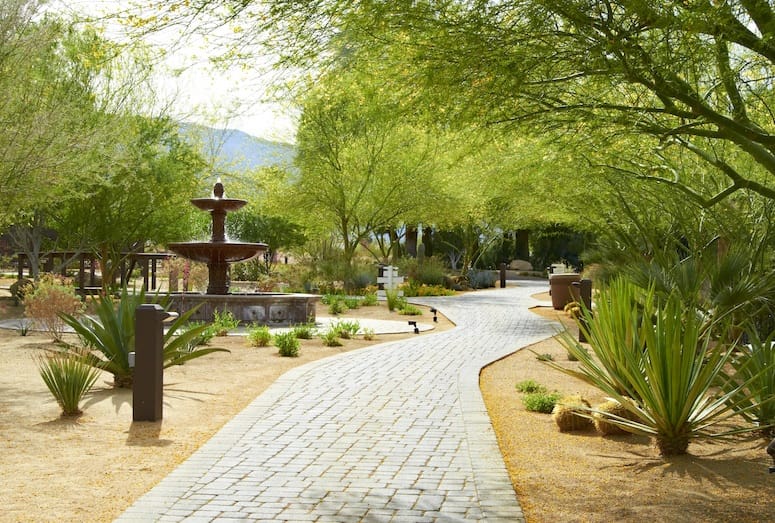 And you thought Palm Springs was chill.

For a wholly serene day or weekend trip, head South on California Route 86 for a mere 90-minute drive from Palm Springs to the historic retreat of La Casa del Zorro in Borrego Springs, reopened in 2013 with a $13 million makeover after a three-year closing.

Seeking a golf and leisure getaway?

The resort's subdued charm and open-armed hospitality match star gazing with eye gazing to create an idyllic destination for you and your favorite playing partner. The resort’s magic is apparent upon arrival.

From Spanish, La Casa del Zorro translates to, "Home of the Fox."

Amid these spare, but cooing and quietly magical surrounds, your partner will likely take on a duality of both.

"I ask people, what did you do while you were here, and I get a blank stare – and that's the tranquil part," says Patrick Sampson, general manager at La Casa del Zorro. "This is the true veg-out destination of California. People actually come here and do nothing."

Adjacent to Anza-Borrego State Park (California's largest state park at 600,000 acres), there is a pleasant mesh of something/nothing at the resort, where the longest trek is strolling the grounds from your room or casita to the spa, bar or restaurant. Private pools are just a part of Zorro’s serene allure.

"The experiential is that our guest history is not numerically measured, it's measured in generations of families who have been here," Sampson adds. "It's the whole feeling of family-community; that families communicate and connect once again here. It's the old-fashioned stuff."

For pampering, the on-site spa (which, to give a sense of the rurality, holds the lone elevator in Borrego) pleases with a host of treatments. To dine, the experience at the on-site Butterfield Room matches an excellent steak with a very solid wine list. Drivable for big hitters, the diminutive 17th counters with bunker-laden routing and a two-tiered green.

Formerly a 27-hole facility designed by the late Ted Robinson (an architectural name that desert players are no doubt familiar with, as "The King of Waterscapes" has more than a dozen Coachella Valley courses to his credit), today's Rams Hill is a total Tom Fazio redesign (from 2007), which reopened in November 2014 after being shuttered for nearly four years.

Despite the volatile financial history of these grounds, readers/players can cash that – as the lone, public rack-rate Fazio course in either Riverside or San Diego counties, respectively – Rams Hills is decidedly worth a visit.

As a course that just reopened for play, I was actually shocked at how pristine the course conditions proved across these serene, unperturbed grounds. With mint-green turf contrasts gently routing through the desert scaping and overlooking the Anza-Borrego for what appears hundreds of pleasantly-barren miles, the solitude here feels singular. The first tee anchored by the clubhouse and set off by the mountains.

"When I first came out here to Borrego, I almost didn’t 'get it;' but you spend a few days, a week, and all of a sudden Palm Springs seems busy," says Mike Setchell, concierge and activities director at Rams Hill, and a veteran of several top Coachella Valley clubs. "And we're not trying to kill people with the price at Rams Hill; we're trying to get people out here to experience it, so they will come back. You don't see things like this in the Palm Springs' desert anymore; it's all different."

With something of a links-style layout which routes seamlessly throughout, Rams Hills plays with continual getability from boxes before considered approaches and crowned, undulating greens.

The diminutive, excellent par-4 17th at a mere 331 yards stood out for me. Drivable for the sticks, the bunker-laden routing and two-tiered green serve as a thesis of Fazio's creativity at play. The guestrooms have both character and comfort.

Looking go big? Well, both the course and resort can accommodate.

Rams Hill offers a 20-minute helicopter flight from Palm Springs, while Zorro can house a party of 10 at its highly-impressive and swank "Happy Days" home, former residence of resort owner and newspaper magnate James Copley.