A thriving shopping center with charming stores and popular eateries such as Farm and Tyler’s Burgers, La Plaza has been the heart and soul of downtown Palm Springs for 84 years and counting. It came to life Nov. 1, 1936, the result of Harry J. Williams’ doodle on the back of an envelope. The architect had come to Palm Springs from Dayton, Ohio, a year earlier to design the Carnell Building (184–196 N. Palm Canyon Drive). Julia Carnell, a civic leader and philanthropist whose husband was the comptroller of National Cash Register, invited Williams back to design the open-air shopping and entertainment center in what would become the heart of town.

Carnell was bullish on the project, allocating $1 million and re-enlisting Williams, who had designed NCR’s offices. Williams transformed turned his sketch into a rendering that included a retail center with 38 shops, 21 bungalows, eight penthouses, chauffeurs’ quarters, a 600-seat theater, and a 150-car underground garage. It even had a chapel.

In an article he wrote for the Palm Springs Parade, Williams proclaimed that Palm Springs had the finest winter weather in the world. He stressed that “the climate was an antidote to tension and that buildings and all else were mere conveniences that help to facilitate the enjoyment of one of nature’s garden spots.” He also favored Cahuilla reservation lands, which he said created a “natural barrier against modern over-expansion.”

Williams’ sons, Roger and E. Stewart, followed him to Palm Springs, and they worked together on the Plaza, as it was called. (E. Stewart later designed a couple dozen residential and commercial properties in town, including the Sinatra House and Palm Springs Art Museum.) 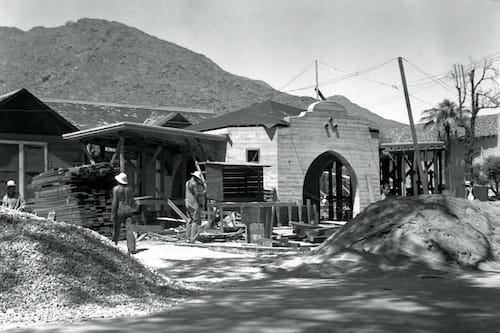 They wanted the Plaza to be open and without pretense. The elder Williams said the lines should be horizontal and inviting and not deflect from the million-year-old mountains that shade the complex from the afternoon sun.

“The Plaza was the first, I would say, comprehensive little shopping center in Southern California in the 1930s,” E. Stewart said of the development, calling it “first coordinated thing with retail and all the amenities that the whole town would need.” (Actually, Westwood Village was first, opening in 1929.)

On the day La Plaza opened, Melvin D. Sale opened Sale’s Plaza Market. At the time, he also operated Sale’s Fulton Market in Beverly Hills. Both delivered groceries to the rich and famous.

One of Sale’s customers, silent film star Ben Turpin, lived a few blocks from his Beverly Hills store. They became friends and Sales invited Turpin and his wife to the grand opening of his market in Palm Springs. Turpin inscribed his autograph on the sidewalk in front of the Indian Avenue entrance to Sale’s Market. 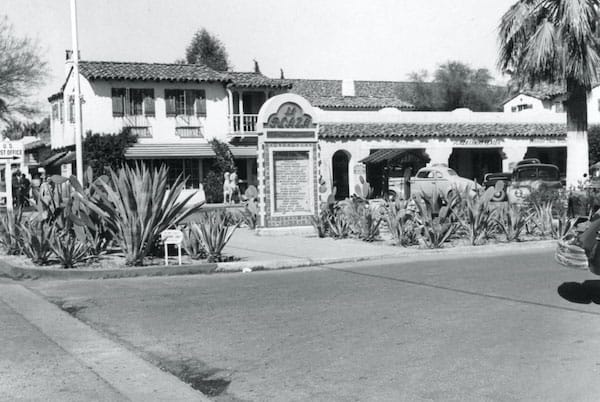 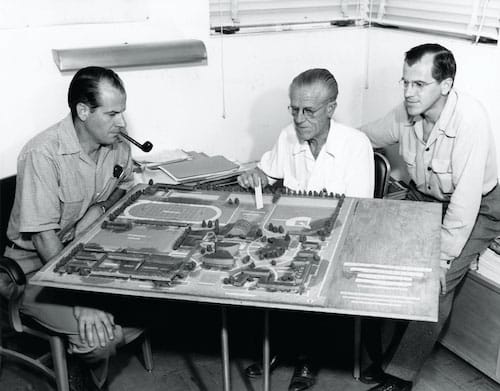 “The Plaza was the first coordinated thing with retail and all the amenities that the whole town would need.”

Most of the sidewalks around La Plaza have been replaced over the last eight decades, but a few yards of the original sidewalk with Turpin’s autograph still remain. The inscription appears on the Indian Canyon Drive side of La Plaza in front of Imageville.

A month after the opening of Sale’s, the Plaza Theatre celebrated its opening night with the world premiere of George Cukor’s film Camille, starring Greta Garbo, Robert Taylor, and Lionel Barrymore. In the 1990s and early 2000s, the theater was home to The Fabulous Palm Springs Follies.

In the 1950s, when financial woes befell La Plaza and it was auctioned, Zachary Pitts and some of his friends stepped up with the winning bid saved it. Today, Pitts’ grandson, Larry, serves as president of Plaza Investment Company Inc., which continues to manage the property that has since gained Class 1 Historical Site and remains the nucleus of the Palm Springs village.