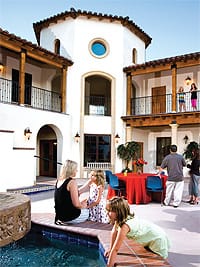 As dawn’s first light peers over the spectacular Santa Rosa Mountains each day, it reveals an enchanting, well-planned community that clearly lives up to its moniker, “Gem of the Desert.” La Quinta’s blend of insurmountable beauty, inspired recreational activities, commitment to the arts, and diverse entertainment options provides the ideal desert paradise for visitors and residents alike.

And statistics show that La Quinta has burgeoned into a shopping and dining hub, as well. While a number of cities are experiencing significant drops in retail sales, La Quinta’s most recent figures indicate a continued and steady increase. La Quinta’s retail sales have tripled since 2000 and increased 50 percent since 2004. Projections for 2008 point to retail sales in the neighborhood of $800 million — on pace to break $1 billion, given La Quinta’s strong retail, population, and housing base. This achievement reflects the forethought of city leaders, beginning over a decade ago with the adoption of an Economic Development Plan in 1996.

Since then, smart growth has been a strategy that has produced continued success year after year. In 2005, the city sought input from its residents regarding which shops and restaurants they would like to see come to La Quinta. A wish list was compiled from the responses, and desired businesses were targeted through a strategic business recruitment effort. Some of the top-requested shops and restaurants from that program — such as Costco and Trader Joe’s — have now located in La Quinta. Additionally, new family dining options include Mimi’s Café and Applebee’s.

With more hot spots to enjoy, La Quinta remains a strong draw for tourists. La Quinta hotels have partnered with the city to promote the destination to Southern California’s drive-in market. A project currently underway includes a new tourism Web site that promises to capture and showcase all the exquisite amenities La Quinta has to offer.

At the heart of La Quinta’s tourism appeal, La Quinta Resort & Club has been a cornerstone of the city’s past since it first opened in 1926 as a small group of casitas. Today, it has grown to become one of the country’s premier resorts — a secluded 796-room hotel featuring casitas, suites and villas, golf courses, tennis courts, pools, restaurants, and an award-winning spa. This year, La Quinta Resort was named Best of the West by Meetings West magazine (a highly-rated monthly resource for industry meeting planners and professionals).

Other hospitality venues have joined La Quinta Resort in recent years, giving visitors a number of excellent choices in accommodations. Embassy Suites La Quinta — a Hilton property with 179 rooms and casitas, a spa, restaurant, pool, and conference facilities — is growing in popularity, as evidenced by room occupancy which is up from last year. And room occupancy for 2009 is on pace to almost double from 2008.

For those seeking a more intimate setting, Lake La Quinta Inn offers 13 deluxe guest rooms with fireplaces and lake and mountain views, as well as spa services. The property was voted Most Romantic Inn by BedAndBreakfast.com in 2005, and often sees the return of devoted guests — lured by its breathtaking surroundings.

La Quinta’s legend as a getaway to the rich and famous in the mid-20th century continues to set the tone for development in the city. Architecture and landscaping are carefully considered to maintain the quaint atmosphere that has defined La Quinta’s charm over time.

Historic roots are weaved throughout the cozy Village at La Quinta, which has grown into a retail, restaurant, art, and entertainment district tucked in the heart of a mountain cove. Ambiance abounds as the sun sets, with rustic street lamps and the sounds of baseball, tennis and playground fun at nearby parks — creating a Norman Rockwell scene.

The Village is home to a quaint, pedestrian-friendly retail center known as Old Town La Quinta, which hosts regular events such as Concerts on the Lawn and Art Under the Umbrellas sponsored by the La Quinta Arts Foundation. The lively events attract new visitors to this treasure that is just enough off the beaten path to make you feel like you’ve escaped to another world. The picturesque surroundings create an ideal work atmosphere as well, with plenty of office space available in the Village for those looking to start or relocate a business.

Undoubtedly, the most notable addition to the Village this year is the La Quinta Museum, which opened in May. Expanded from an old water district building that once housed the museum, the new two-story facility overlooks a soothing water fountain and charming courtyard ideal for special events.

The 9,000-square-foot expansion incorporates history throughout, including historic gates, lamps, and stained-glass windows from La Quinta’s playground of yesteryears — the Desert Club. A museum store, spacious meeting room with attached kitchen, and an André Blanché mural depicting the history of La Quinta round out this must-see La Quinta attraction.

Adjacent to the Village is the city’s extraordinary SilverRock Resort. The development features a championship golf course that was a pro favorite in its first year as a home course of the Bob Hope Chrysler Classic. Many pros used the Arnold Palmer Classic Course at SilverRock as their practice and warm-up course during the renowned tournament. Built at the base of the stunningly serrated Santa Rosa Mountain ridges, SilverRock’s incredible views and excellent course conditions have increased interest and golf play there, particularly since its rave reviews following the Hope Classic.

Plans for the permanent clubhouse are underway, with renderings showcasing a grand facility that will include a grill lounge and dining room, golf shop, banquet room, terrace, and event lawn. Designed in a Mexican hacienda-style, the club house will be comparable to those of high-end private clubs in the Coachella Valley.

While enthusiasm builds as SilverRock continues to further develop, other city amenities came to fruition this year, including a 10,000-square-foot expansion of the La Quinta Library that added a children’s area, more than 15 computers, and study rooms. The children’s area is filled with colorful, size-appropriate seating. The La Quinta Library now has the third largest circulation in Riverside County.

Outdoor aficionados in La Quinta have more to love this year, too. Trails winding through La Quinta will soon be upgraded via the Top of the Cove Trails Plan. The plan facilitates a coordinated effort between the city, the California Bureau of Land Management, the Coachella Valley Water District, and hiking groups. It will provide for improved signage and trail conditions.

Centre Pointe Park, located near Homewood Suites at the intersection of Seeley Drive and Miles Avenue, offers new recreational activities in the northern section of La Quinta. A playground, dog parks for small and large dogs, and an expansive grassy area can be enjoyed by residents and visitors.

New public art pieces have been installed, generating even more interest in the Art in Public Places program. Take a leisurely afternoon drive throughout La Quinta to check out Freedom at Griffin Ranch, The Rider at Andalusia, Air Stream II in the Village roundabout, and two new tile murals in Old Town La Quinta. The La Quinta Community Services Commission approved a strategic plan for this program, which includes creating an artist registry and working with the La Quinta Arts Foundation to continue implementing diverse art throughout the community.

La Quinta’s rich arts culture provides a beautiful canvas for businesses, attracting convenient new shopping destinations and services. Business in La Quinta continues to boom with a plethora of added office space available. Perhaps one of the city’s largest upcoming ventures is the highly anticipated Eisenhower Medical Center facility at Washington Street and Miles Avenue. The medical complex will occupy 15 acres and is by far the largest extension of Eisenhower Medical Center outside its main campus.

From beauty and charm to safety and security, La Quinta continually strives for community excellence. Enhancements in the safety and transportation arenas have been especially appreciated by residents. This year the city is adding four sworn patrol deputies, a community service officer, and a lieutenant.

The addition of a 6,000-square-foot Emergency Operations Center is a key advancement to safety, as well. Located in the basement of the city’s 20,000-square-foot city hall expansion, it is structurally reinforced to withstand large earthquakes. The EOC is a vital location where decision-makers can gather during emergencies so they have the resources and facilities available to work swiftly during times of crisis. Equipped with water and power reserves, city leaders can use the center to act as emergency managers when necessary.

To further enhance public safety, the city has formed a Community Emergency Response Team, which consists of 30 volunteers who have received disaster preparedness training. CERT members assist others in their neighborhood or workplace following an incident when professional responders are not immediately available. This nationwide program stems from the Federal Emergency Management Agency.

Drivers in La Quinta can look forward to transportation improvements, including the widening of Highway 111 to three lanes between Adams and Jefferson streets and from Washington Street to the western city limits. Traffic-signal controls will also be replaced, allowing the city to better coordinate signals for improved traffic flow along Highway 111.

What’s more, the city has received national recognition for its Vista Dunes Courtyard Homes affordable housing development. Vista Dunes, with state-of-the-art, energy-efficient building materials and appliances that will minimize utility bills and be environment-friendly, has received “platinum” certification from the Leadership in Energy and Environmental Design for Homes program — a national rating system for green building. Vista Dunes is the largest multifamily, affordable-housing project in the country to have received this certification.

La Quinta continues to strive for the very best — in recreational amenities, art and culture, entertainment and business, housing and the environment, as well as public safety and transportation. The allure of La Quinta is as strong as ever, and exciting milestones are imminent as this charming desert community advances to the next level.