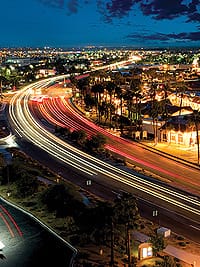 Reflections of progress abound throughout the city of La Quinta, from the impressive new Eisenhower facility in the northwest quadrant to major street improvements in a number of La Quinta thoroughfares, including the widening of Highway 111 just west of Washington Street. These efforts, and many others, signify the city’s commitment to excellence — even in uncertain times — and keep La Quinta shining as a true “Gem of the Desert.”

The current expansion of Highway 111 in the Point Happy area marks the final chapter of Highway 111 improvements in the city. Upon completion, the entire stretch of Highway 111 that runs through La Quinta will be six lanes wide and more easily traversed. This roadwork, which also entailed major rock removal and the creation of a beautiful city entrance, is the culmination of several improvements that provide for a smoother traffic flow along this main artery.

Just north of the Point Happy roadwork, at Washington Street and Miles Avenue, is the new Eisenhower George and Julia Argyros Health Center. Filling a growing need in the eastern part of the valley, the facility is slated to open in spring 2010. The three-story, 92,000-square-foot medical building will ultimately house an urgent care, imaging center, laboratory, pharmacy, radiation oncology center, and physician offices.

And although times are challenging these days for all types of businesses, a variety of shops, restaurants, and services are making their way to La Quinta. The city has welcomed Rockin’ Baja Coastal Cantina, Devane’s Old Town, Souplantation, CVS Pharmacy, Yogurt Island, Tea House and Wine Bar, Sam’s Sushi, Panda Express, Applebee’s, Mimi’s Café, and many others. Incoming businesses include The Carlyle Deli, Viva Cantina, and the Paper Paper Stationers — all destined to enhance the dining and shopping experience in La Quinta.

Despite the overall downturn in retail sales, La Quinta continues to increase its market share with the help of anchors such as Walmart, Target, Home Depot, Lowe’s, Costco, Sam’s Club, and Best Buy. Years of effective planning and economic development efforts have resulted in the building of a solid retail base, which strengthens La Quinta’s economy during difficult times.

The city has also placed the support of local businesses as a top priority for the upcoming fiscal year. A new cooperative marketing program, underwritten by the city, will offer businesses a chance to participate in special advertising packages that leverage their advertising dollars and allow them to take advantage of a variety of effective and enhanced marketing opportunities. The city also launched www.PlayInLaQuinta.com, a Web site geared toward attracting tourists by promoting hotels, shopping, dining, and special events in La Quinta.

Other business support strategies include the installation of signs along major city roadways directing visitors to the downtown La Quinta Village and working with Imperial Irrigation District and Southern California Gas Co. to develop incentives for businesses to participate in energy-reduction programs. In fact, the city views its green initiatives as key programs for stimulating La Quinta’s economy. Partnering with local energy providers to help residents and businesses consume fewer resources and save money is certainly of benefit to the environment — and makes good business sense.

Workforce housing projects such as Vista Dunes Courtyard Homes and Wolff Waters Place have also incorporated progressive building techniques, which include some of the highest conservation-based standards available today. As the largest multifamily, affordable housing project in the country to achieve LEED Platinum certification, Vista Dunes has received several industry awards including an Award of Excellence from the California Redevelopment Agency and three Golden Nugget awards from Homebuilding’s Premier Tradeshow and Conference.

Green thinking by city leaders has also paved the way for smart land-use planning. The golf greens at SilverRock Resort are about to get even greener with an intrepid concept that will transform barren desert land surrounding the Arnold Palmer Classic Course at SilverRock into bountiful farmland producing turf and vegetable crops while offering a smarter solution for dust control.

Of course, what really shines the spotlight on SilverRock is its status as a home course of the 2010 Bob Hope Classic — a star-studded golf tournament that will be played exclusively in La Quinta. PGA pros have been known to favor SilverRock’s pristine conditions and enjoy warming up and playing practice rounds on this championship course. Many events surrounding the Bob Hope Classic will draw golf and celebrity fans to La Quinta in January — putting the city at the center of a major, nationally televised event.

While golf is undoubtedly one of La Quinta’s best-loved pastimes, a variety of recreational opportunities abound. In tune with the Santa Rosa and San Jacinto Mountains National Monument that surrounds it, the city places a strong emphasis on trail improvements and is working on a trails plan for the top of the Cove and the Whitewater Channel. A Community Services Master Plan has been implemented, which focuses on parks, health, and fitness programs, as well as arts, cultural, and educational experiences. The city is currently exploring land acquisition for additional park facilities and is in the process of designing and building two new dog parks.

The charming Village area of La Quinta continues to develop and attract visitors and residents. A new certified farmers market made its mark in Old Town La Quinta this past year and will be back for a second season. The market draws crowds of regulars each Sunday, September through May, and fills Main Street with fresh produce, flowers, breads, and other specialty items.

At the west end of the Village is one of the city’s premier attractions: the La Quinta Museum. Since its opening, the museum has generated a buzz around the valley due to a host of unique exhibits and special events. Showcasing everything from eclectic teapots and La Quinta pioneers to astronomy and Abraham Lincoln, the museum keeps exhibits fresh by rotating them every few months. It features great indoor and outdoor spaces ideal for a variety of events such as First Fridays (October through April).

As La Quinta gains popularity and its population and tourism base expand, public health and safety remain the city’s top priorities. The construction of Fire Station 32 will bring an 8,000-square-foot fire station to Avenue 52 and Desert Club Drive. The location will improve emergency response times to its service area, which encompasses La Quinta Cove and central La Quinta.

La Quinta continues to be a city of progress where the quality of life is second to none. There is much to explore and adore in this true “Gem of the Desert.”