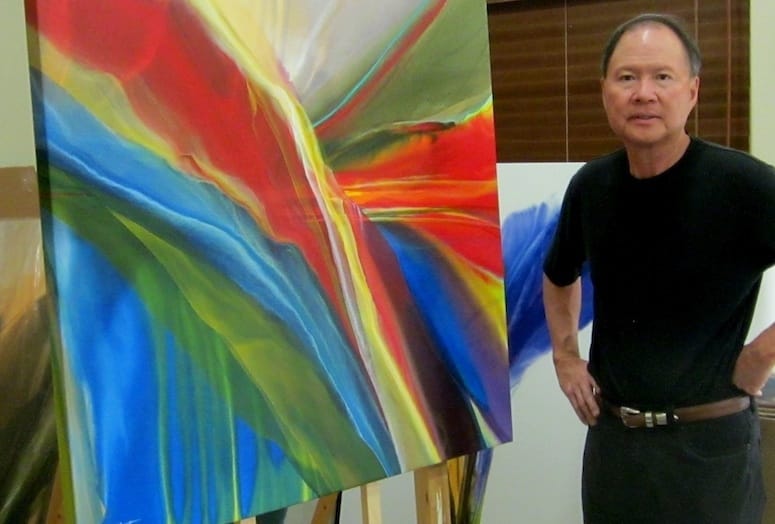 Dennis Nagatani’s canvas showcases a cascade of colors falling from different directions as if the La Quinta artist has captured falling water.

His “Desert Falls” painting will be the signature poster for the 29th Annual Southwest Arts Festival, which runs Jan. 23-25, at the Empire Polo Club in Indio.

However, like any good art piece, “Desert Falls” colorful facade hides the amount of work it took to create it. Nagatani manipulates the paint and canvas in a variety of ways. He dilutes abstract paint and pours them from cups across an unstretched canvas.

He works with raw canvas so the piece can stretch and pucker and retract as it dries. To start, Nagatani will do a “clear” pour, which means just pouring water down the canvas to see where it flows. Then he’ll follow with a paint mixture. Before he starts, he already has the colors in mind, but has no idea what the final composition will be.

Sometimes, Nagatani works quickly pouring wet on wet colors, but if he doesn’t want a certain mixture to “pool,” he’ll prop up the canvas with cardboard boxes.

Props are something Nagatani learned as a child.

“We used to go to the movies like ‘Prince Valiant,’ and then act out what we just saw,” Nagatani recalls. “I loved our props, which were trash can lids and picket ‘swords’.”

This self-taught artist began as an accounting major at San Diego State University, but soon switched to philosophy.

When a glass blowing class opened up, Nagatani was turned away because he wasn’t an art major. So he started painting on his own.

His paintings are complex, thoughtful, and impossible to recreate.

“I’d have to use the same color sequence and make the same errors,” he explains.

For example, “Desert Falls” was initially created in a different direction.

“It just wasn’t working, so I turned the canvas around,” he says.

Oftentimes, collectors give him complete freedom on a commission. He tours their homes to get a sense of their color and style.

But one time, a client asked him not to use any red.

“That’s really limiting,” Nagatani recalls. “Most of my paintings have some red in them.”

He ended up calling her later saying that it had to have red and she agreed.

Large abstract paintings line the walls of his home studio, which opens to a garden.

Nagatani used to paint from nature, taking pictures and capturing what he saw on canvas. Yet, when he ditched the pictures, his paintings became more abstract.