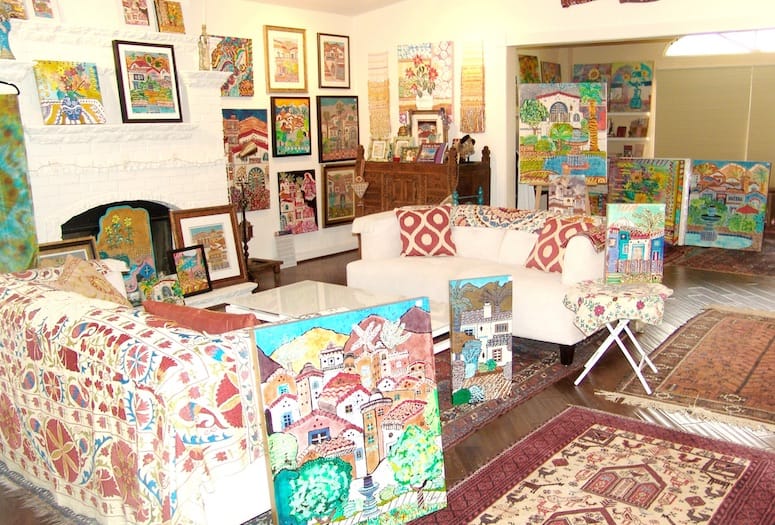 The walls of Darleen Wilkerson’s La Quinta home are filled with her colorful batik artworks, which can be seen during the Artist Studio Tour Dec. 3.
PHOTOS COURTESY OF DARLEEN WILKERSON

The entryway and living room walls to Darleen Wilkerson’s La Quinta home are filled from floor to ceiling with her colorful batik artworks that reflect her recent move to the desert as well as 33 years of world travels. "My dad was in the motion picture industry, so we always came to the desert. We finally moved here in 1971, so it was natural for me and my husband to move back here," Wilkerson says from her home in La Quinta Cove.

Wilkerson’s home is part of the sixth annual La Quinta Open Studio Tour set to run from 10 a.m. to 5 p.m. Dec. 3 only.

From 1981 to 2015, Wilkerson taught art in several countries including Yemen, Quetta (Pakistan), Poland, Central Asia, Jordan, Armenia, Romania, Cypress and Macedonia. She met her British husband in Yemen. She taught art, and the programs helped local women become entrepreneurs. "It was a government arts program that worked," says Wilkerson.

Then the funding ran out with the current administration. Her website, Beyond the Fringe Clothing, tells the story of her travels as well as showcases her artwork.

During those years, Wilkerson created her own batiks on cloth, and later on paper that reflected her ex patriot life. "Batik is kind of a vanishing art because of all the time involved," says Wilkerson. "It's a detailed process that takes multiple steps with dyes and wax."

Her batiks depicted her time spent in those countries, anywhere from one to five years. Many of them depicted mosques and other buildings and also the women she worked with. She sold those images to expatriates and ambassadors. Now she has hundreds of images on her computer that reflected that time.

Since her move to La Quinta, Wilkerson has been doing more nontraditional batiks on paper. Cityscapes, as she calls them, reflect the buildings in La Quinta and other desert cities. They are collected by many locals, including La Quinta Mayor Linda Evans. During the studio tour, Wilkerson often gives batik demonstrations in her studio. "Wax and dyes can be messy, but people appreciate batiks more when they see how it's done," she says. 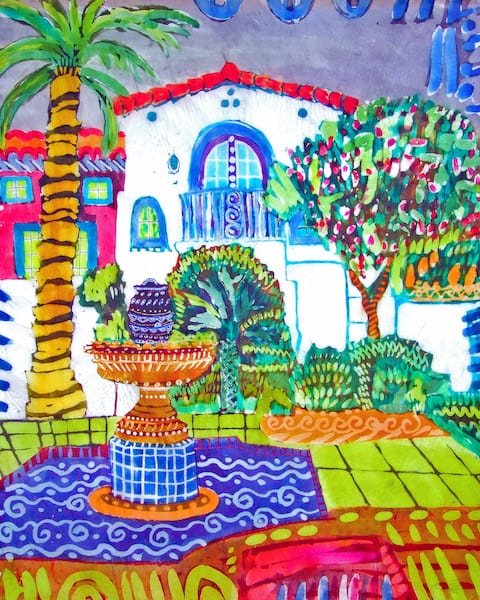 Spanish Architecture in the Desert. 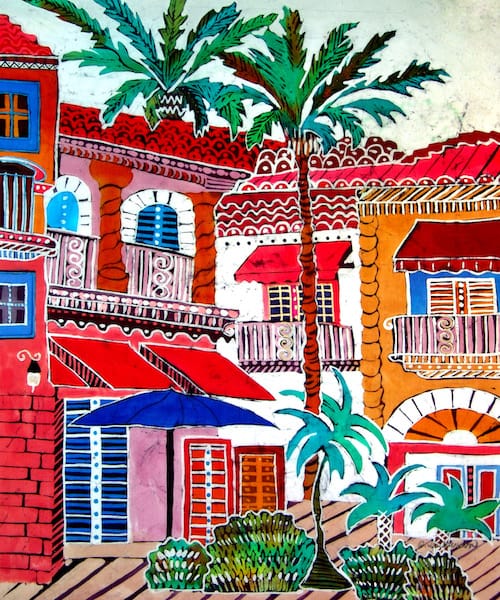 Art has always given Wilkerson direction. After initially moving to La Quinta, she says she was unsure what to do next. Her painting in a women's show last year at the La Quinta Museum entitled, "From There to Here: Now What?" reflected all those years working with native women, cloth, and dyes. Those bonds were strong, she wrote, but the ties to her new home in La Quinta are thin and tenuous, but with time, will grow stronger.

She's already formed a women's group in La Quinta, called La Quinta Women Artists, where the 28 members showcase their work online, and help each other with ideas and promotion.

VIDEO: Watch Darleen Wilkerson create one of her batik pieces.