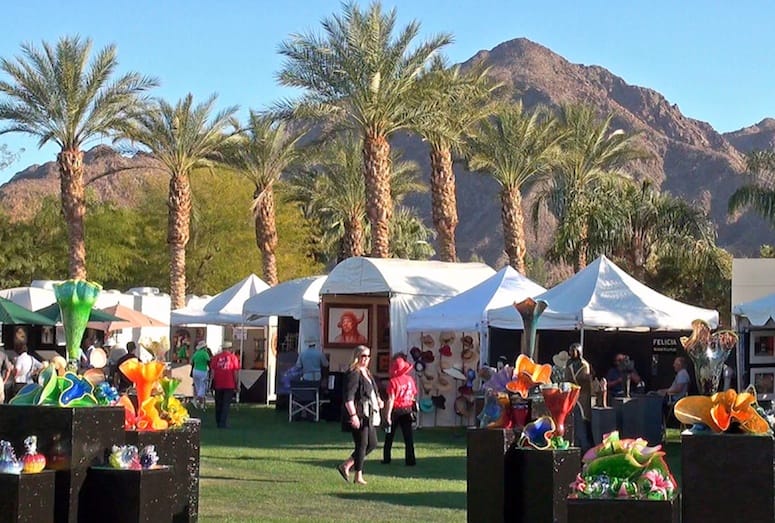 La Quinta Arts Festival has been named the No. 1 Fine Art Show and No. 1 Fine Craft Show in the country for 2014 by the prestigious Art Fair SourceBook, the definitive guide to the best juried arts and craft fairs in the nation.

The 2014 La Quinta Arts Festival, set for March 6-9 at the La Quinta Civic Center Campus, features 234 contemporary artists from 36 states; plus Israel, Nicaragua and Canada are also represented; 51 are new artists to the Festival, exhibiting in the Coachella Valley for the first time.

The La Quinta Arts Festival claimed the most recent year’s premier rating and distinction over competing fine arts and fine craft festivals in major markets including Chicago, Denver, Dallas/Fort Worth, Philadelphia, Washington, D.C. and others. Art Fair SourceBook announced the top ranking for La Quinta after comparing total sales information and ratings from participating artists from all shows across the country.

"We are grateful and honored to again be recognized for the outstanding work of our staff and volunteers on behalf of the artists and patrons, who look to La Quinta Arts Festival each year to deliver the best of the best," says Christi Salamone, executive director of La Quinta Arts Festival and its organizer La Quinta Arts Foundation. "Our goal is to offer each artist and each patron a unique experience, showcasing the highest quality and diversity of fine art and fine crafts in an unmatched, beautiful desert setting."

La Quinta has been among the best destinations for fine art for more than three decades. The ranking is determined by the average sales of each artist. During the 2013 event, La Quinta Arts Festival set new event records for art sales, exceeding $2.8 million, and increased daily attendance over the previous year. The festival's success has also generated more than $1.1 million over the years to support college scholarships for students pursuing degrees in the arts.

In advance of the scheduled March Festival, the La Quinta Arts Foundation continues to offer the popular ‘Art Under the Umbrellas’ shows throughout January and February in Old Town La Quinta.