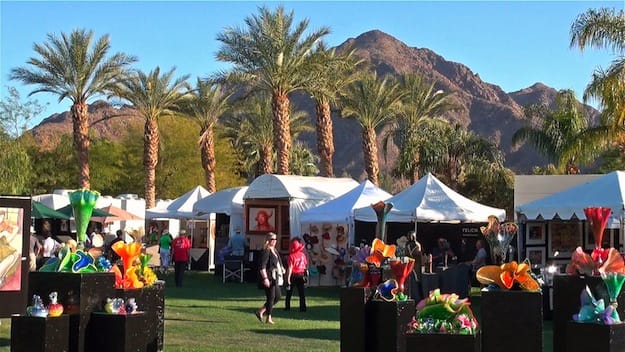 More than 25,000 people attended the festival to push sales to a record high of $2.8 million, up from $2.5 million in 2012. The festival, named the No. 1 fine art festival in the nation by Art Fair SourceBook, has posted growing sales for the last five consecutive years.

“We are thrilled to create an environment that brings together extremely talented artists and those who appreciate their work, while fulfilling our mission to promote and cultivate the arts,” said Christi Salamone, La Quinta Arts Festival executive director. “Each year we work with our sponsors, members and volunteers to create an exciting, multi-faceted experience for our attendees and it seems to resonate with people.”

And more than of the people who attended came specifically for the festival, according to a patron survey conducted by the festival foundation. That generated an average spending (in addition to art purchases) of $1,063 per person.

Of the 25,000 patrons at the 2013 festival, 43 percent were out-of-area visitors. Patrons came from 45 states and five countries. The study revealed that 59.3 percent of attendees patronized La Quinta based businesses during their visit to the festival. Nearly one-third of respondents reported an annual household income exceeding $150,000.

Festival patrons also gave the event experience overwhelmingly positive ratings. More than 93 percent rated the festival "above average" or "excellent" and more than 75 percent stated that they are "very likely" or would "definitely" return in future years. Nearly half reported that they had attended the Festival three or more times in previous years.