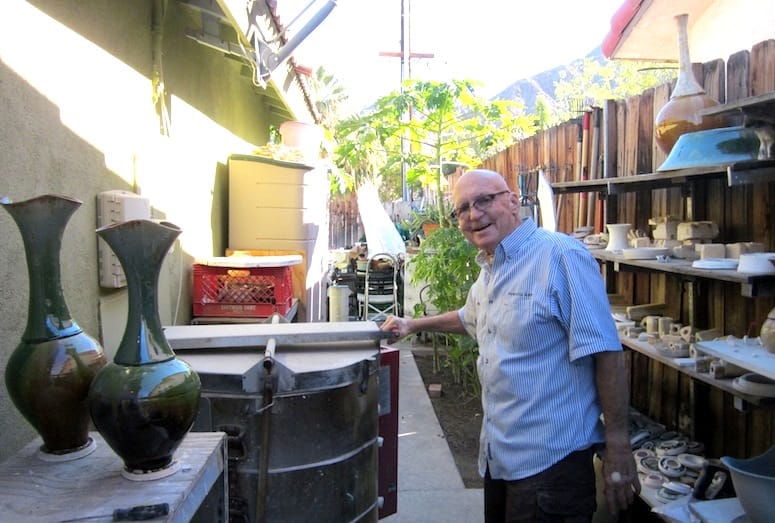 After owning a series of souvenir shops between Los Angeles and La Quinta, Elliott Newton was on the fast track to success.

However, following a bitter divorce, triple bypass surgery, and dramatic weight loss, Newton had to rethink his life.

Twenty-three years later, Newton is known as “the potter of La Quinta,” and will be showcasing his ceramics with crystal glazes at the Southwest Arts Festival, Jan. 24-26, at the Empire Polo Grounds in Indio.

It was a nurse in the hospital who suggested that Newton let go of his pain and misery. “Something good will come out of it,” she promised him.

Newton enrolled in ceramics classes at the College of the Desert in Palm Desert and continued for five years. He spent another five years as a teacher’s assistant before venturing out on his own.

Art galleries didn’t work for him, even though his ceramics were high quality. “I’m a peddler at heart,” claims Newton. “It takes me two minutes to sell a pot, and then 15 minutes to talk them out of it.”

On average, Newton displays at 15 to 18 art shows a year. He has been a fixture at the Southwest Arts Festival for the past 10 years.

“The polo grounds are a great place to host an arts festival,” Newton said. “And the people who run it bring in people who want to buy art.”

Newton’s ceramics are priced from $100 to $1,000 apiece. He believes people collect them because of the crystal glazes.

“I didn’t perfect crystal glazes,” admits Newton. “Anyone who tells you that is lying. The glazes came from China about 2,000 years ago, but I found a formula that works for me.”

Newton works out of the garage of his La Quinta home that he shares with Tracey, his wife of 15 years. He fires three kilns almost daily between January and March.

“I use them so much that I burn out the units,” he says.

Newton uses porcelain clay to create his ceramics with Greek and Asian influences. He uses crystal glazes that are fired at very hot temperatures with slow cooling periods.

“There’s no greater ‘high’ than seeing the crystal glazes as they come out of the kiln,” Newton exclaims.

Sometimes one piece will bump another, causing everything in the kiln to break when he opens it up 12 hours later. “That’s the gamble you take with ceramics,” Newton says.

Newton gains inspiration from a variety of sources, including books and the environment. For example, the lids to his oversized teapots started taking the shape of a dome of a Russian cathedral.

At first, he made them too tall and ornate, but has since perfected them.

Oftentimes at shows, people will ask him, “What’s new?”

“I’ve been perfecting this crystal glazes for more than 20 years,” he says. “It’s hard to show something new and be good at it quickly.”

However, last year, Newton started carving images on the sides of his pots. His favorite tool looks like a pencil with the lead missing. The handle is caked with clay. His weathered hands reveal many cuts and a few black fingernails. They are working man’s hands.

“It’s my passion, my pleasure, and I am thankful to be doing it every day,” he says.