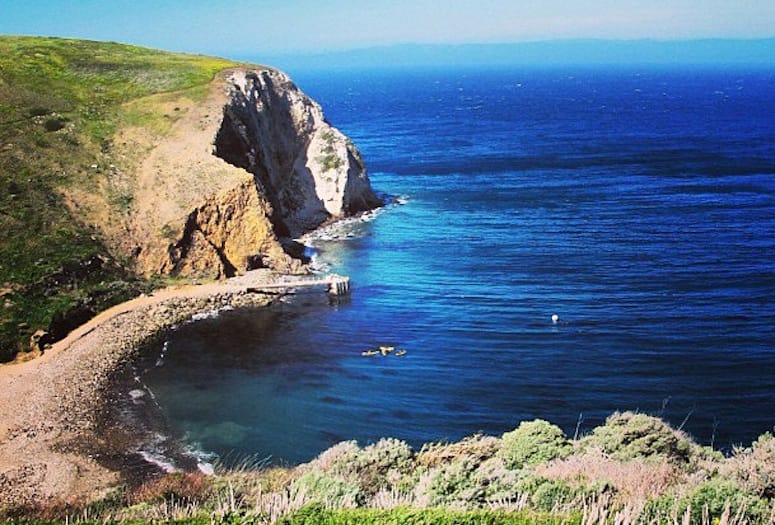 From inside my tent, nestled in the wooded oak grove of Santa Cruz Island, I try to identify the faint barking that I can make out over the whistle of the wind.

I slip into the navy night illuminated by the full moon and spot two glowing circles fixed on me from behind the trunk of a nearby cypress. Normally, such an encounter while camping in the wilderness would startle me straight into my mummy bag. But I suspect right away this critter is a harmless island fox. At about a foot high, he’s no larger than a house cat, and about equally as timid. And he’s the biggest threat I face, predator-wise, here at Scorpion Ranch (on the eastern part of the island, the area was a sheep ranch in the early 1900s).

A canvas for a variety of colorful flora and fauna — 600 plant species and some 200 mammals, marine creatures, reptiles and birds — the island is a hiker’s haven, offering diverse terrain and trails that wind through the interior grasslands and along scenic coastal cliffs.

The only real danger lies in exploring the eroding cliff edges, which makes this one of the most relaxing and enjoyable places to explore if you do it smartly. No need to stand alert to four-pawed hunters hiding in the brush. It’s also a paradise for kayakers, surfers, snorkelers, and divers.

Coastal trails and overlooks provide the perfect spots for picnics and drinking in the epic views — and a bottle of wine if you go at sunset “happy hour!” At more than 96 square miles, Santa Cruz Island is the largest of the Channel Islands, five of which are part of Channel Islands National Park — Santa Cruz, Santa Barbara, Santa Rosa, San Miguel, and Anacapa.

The archipelago, between 14 and 60 miles from the mainland, is home to 175 miles of unspoiled coastline. Isolation has enabled independent evolution; among the 2,000 indigenous plant and animal species that call the islands home, 145 aren’t found anywhere else in the world. While the surrounding waters attract about 300,000 visitors a year who are on the lookout for sea lions, whales and great whites, a mere 90,000 venture to the lands. Compared to the 4 million people that visit Yosemite a year, on average, that’s not very many.
Accessible only by boat (visit islandpackers.com) or flights from Camarillo, the island’s remoteness is what makes it one of the least trekked — and special — places in California.

If You Go: Watch out for poison oak, jumping cholla cactus, ticks and scorpions. Those exploring the waters should pack a wet suit, hood and booties — water temperatures average 50 to 70 degrees. If  you’re camping, be sure to store all edibles in the campsite’s bear box; the crows here are skilled with backpack zippers and will steal your snacks (or skivvies, as I witnessed!) in mere seconds.