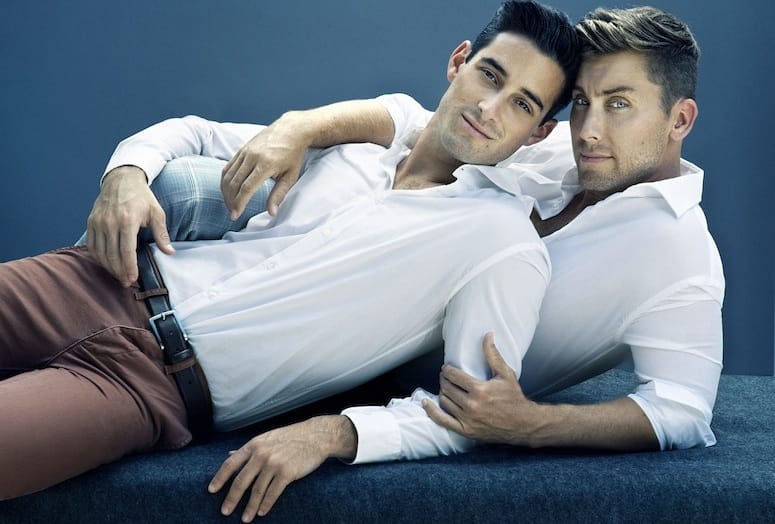 Lance Bass and Michael Turchin, who met in Palm Springs four years ago, will be married Dec. 20 in Los Angeles.
Photo by Ricky Middlesworth

In an event soon to become “the first American television broadcast of a celebrity marriage between two men,” former ’N Sync and TV personality Lance Bass and actor and artist Michael Turchin will tie the knot on Dec. 20 in Los Angeles.

But the love story began nearly four years ago in a romantic destination that remains one of their favorite places to visit… Palm Springs.

Lance took time out from his last-minute wedding prep to tell Palm Springs Life why they love hanging out in town and where you might spot them.

What's the most important thing we should know about your upcoming TV wedding?
“That it’s going to be the best night ever with all of my friends and family. I’ve loved throwing parties since I was young, but this is the ultimate party I’ll ever throw because it’s the best day of my life.”

What is the history of your relationship in regards to Palm Springs?
“We actually met in Palm Springs after the birthday party of a mutual friend. We had the same exact friends, but we never knew each other. I stopped by my friend’s house on my way out of town and Michael and I hit it off. Then he hit me up on Facebook and we started talking—just like all the kids do! (Laughs.) It will be four years together this January.”

What keeps you guys coming back to visit?
“Tons of our friends have houses here and we love visiting. My favorite place is the Ingleside Inn. I’m even developing a TV series with Mark Burnett [British television producer behind Survivor, The Voice, The Apprentice, and Shark Tank among others] based on it. I love Mel Haber to death. After meeting him and reading the book he wrote on his legendary hotel, I said, 'Why isn’t this a TV show?' So hopefully I’ll be living here in the near future and shooting the show!” What are your impressions? Does the area have a bright future?
“I call it the ‘LA Hamptons.’ It’s where everyone loves to go to relax and unwind. It’s been a place to escape to for the past 50 years, and it’s still a place where people can just enjoy themselves, not talk about work, and have privacy. Now it’s getting back to that high point again. Everyone just loves to be there. It kind of reminds me of Miami, with a bunch of characters all in one place.”

Do you think it's a good spot for couples to wed?
“Definitely! The only gay wedding I’ve ever been to was outdoors at a private home in Palm Springs with a mountain backdrop. I got a lot of ideas for my own wedding there. In Palm Springs, it’s all about the outdoors and it’s the perfect place to get married because it has this great nostalgic feel but it also has a lot of fun new places.”

If we were going to have a Lance and Michael spotting in town, aside from the Ingleside Inn, where might it be?
“We love hanging out on the main road. Last time we loved having brunch at Workshop (Kitchen + Bar). And, I’m no stranger to a casino! I love to take a group of friends and play craps or a couple hours on the slot machines. Like I said, you see lots of characters from all walks of life, all who choose Palm Springs as the place to be.”