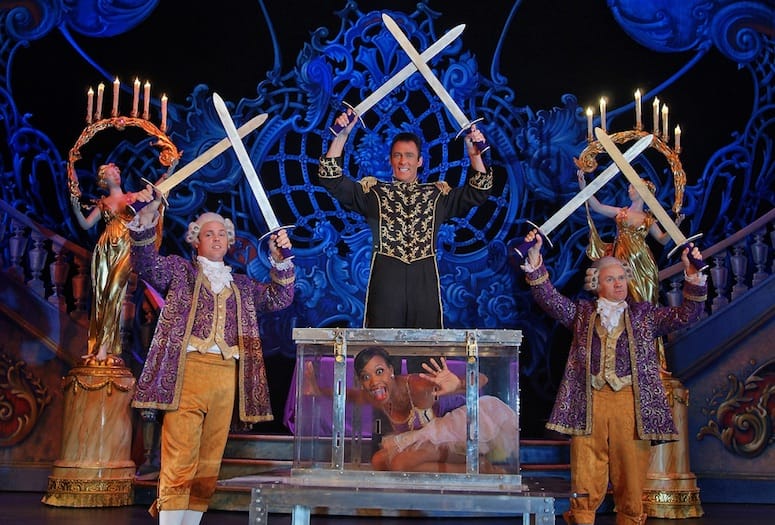 Lance Burton is considered by his peers to be the greatest stage magician of the past century. Now, after a decade of semi-retirement, he’s returning to the spotlight with his Lance Burton Master Magician & Friends tour, which magically appears Aug. 17 at Fantasy Springs Resort Casino in Indio.

However, Burton’s most impressive magical feats have come in front of a live audience, having performed an astounding 15,000 shows in his 30-plus year career. The master magician recently spoke to us ahead of his show at Fantasy Springs.

OK, let’s start with an icebreaker. Which of the following magic-themed songs is your favorite: “She Can Do Magic” by America; “Black Magic Woman” by Santana; “Magic Man” by Heart; or the Beatles’ “Magical Mystery Tour”?

Whoa — those are good ones! Yeah sure, “Magical Mystery Tour.” I was on a television show one time and they couldn’t use that name because it was copyrighted. It was for Nickelodeon. But they called it The Mystery Magical Tour. It was a half-hour show produced by Marc Summers, who’s a buddy of mine. Marc was the host of Double Dare. Back in the ’80s he produced this half-hour kind of mini TV special for Nickelodeon and it was shot at the Magic Castle in Hollywood, and it kind of had this Halloween-type feel. And Nickelodeon ran that every Halloween for like 20 years.

What made you want to get into magic as a kid?

Oh, well… that happened many, many years ago. I was 5 years old and I was at a magic show at Christmastime. My mother worked for the Frito-Lay company at the plant there in Louisville, making potato chips. And my dad worked at a building supply company. So this was the employee Christmas party for the Frito-Lay plant. And they had a fella who worked there, at the Louisville, Kentucky Frito-lay plant, named Harry Collins. And at that time I believe he was the sales manager. But he was also a very talented magician. And he was doing a magic show for all the employees. And he asked for a volunteer from the audience, so I raised my hand. I was the kid that got to go up on stage during the show. And he pulled silver dollars out from behind my ear. And that was it. That was the moment… Ever since then, it’s all I’ve ever thought about — where did that money come from? That started my lifelong study of magic. And in fact, in the show today, I do that same trick and I bring up a little kid from the audience.

You’ve been a consultant and a producer on various film and television projects. From a magic standpoint, which shows or movies have really gotten it right?

That’s an interesting question. First of all, I have to start by saying that magic is always, always, always better live. When you’re live and you’re there, and the audience is amazed, it’s a wonderful feeling to experience. The first time was when I was 5 years old and the rest of my life has been trying to get back to that feeling. And I get to relive that vicariously through the audience. So magic is always better live. But as far as movies and television, whenever I’m involved that is the main thing I strive for — to make the experience as close as possible to what you would experience live. Of course that’s an impossible task. You can never really do that. Because the audience is always removed from the magic. You’re watching at home. Even if you see something totally amazing, you’ll get that feeling for a second. But then you’ll go, “Well, maybe they did something that I’m not aware of.”

So having said all that, there have been many films and television shows over the years that have used magic and magician characters. I played a character back in the ’80s on the Knight Rider series, with David Hasselhoff. And that was fun. They wanted to cast a real magician to play the role. And recently I co-wrote and directed a feature film, and I released it last year on Amazon. It’s called Billy Topit Master Magician. It’s a family film and a comedy. And the character I play is a magician, and that was one of the things I insisted on — that all the magic was legitimate. And I was really doing all the magic in the filming.

Are all of your friends magicians or do you hang out with non-magicians too when you’re off stage?

All of the above! Most of my friends are somehow involved in magic or performing. When I look at the people I hang out with, they’re either magicians or comedians or jugglers or actors or writers or dancers. So yeah, that’s not on purpose. It’s just kind of how it happened… I tend to hang out with more the comedy magicians, they’re frankly more fun to be with… One of the guys coming on this tour with me is one of my best friends: Fielding West. He’s is a very highly respected comedy magician. Everything in this act is geared toward comedy.

Tell us about the show you’re bringing to Fantasy Springs.

It’s called Lance Burton & Friends, and it’s a completely different show that I did in Las Vegas for the last 20 or 30 years… I’m doing some of my favorite magic, big illusions, sleight of hand, audience participation, and I’m bringing some of my best friends with me. And there’s a lot of comedy, a lot of magic, juggling… we have a little something for everybody.