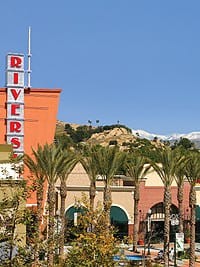 Since its formation in the late 1800s from portions of San Bernardino and San Diego counties, Riverside County has blossomed into a diverse, robust, and world-class economy. The county has seen many transformations from its roots that were predominantly in the agriculture industry with the addition of manufacturing, distribution and logistics, transportation, construction, retail, military, education, and tourism businesses.

To state that Riverside County comprises a large area of land is an understatement. Stretching nearly 200 miles across — from within 14 miles of the Pacific Ocean to the Colorado River — and comprising more than 7,200 square miles of fertile river valleys, low deserts, mountains, foothills, and plains, the county offers something for everyone. It’s also a major economic force that continues to grow rapidly and significantly outperform its neighboring coastal communities in many important ways.

The opportunities available in this massive region of Southern California are no secret, as evidenced by the growth in population — especially in recent years. The population surpassed the 2 million mark during 2006. The population and business growth have drawn the attention of national media such as The Wall Street Journal, Business Week, and Forbes.

Here, we look at some of the key indicators of the region’s recent success and bright future in today’s fast-moving, global economy.

An Influx of Residents

Riverside County is among the fastestgrowing counties in the nation, adding the equivalent of approximately 145 newcomers each day or one new resident every 10 minutes.

At the beginning of 2007, the California State Department of Finance estimated the county’s population at 2,031,625 (with a median age of 32.2), making it the state’s fourth largest of the 58 counties. This amounts to 5.39 percent of California’s total population. An influx of 65,000 people in 2006 ranked the county second in numerical change in California, behind Los Angeles County. Riverside County also ranked second in the state in percentage increase in permanent population. There were 753,797 households in the county at the beginning of 2007, and home ownership hovers at a very impressive 70 percent.

The main factor contributing to the population increase is that people are moving to Riverside County for a variety of jobs, a range of housing options, and quality of life. Domestic migration — the people that move into Riverside County from other parts of the United States — has accounted for most of the population growth, averaging about 73,475 persons per year since 2000.

Riverside County has experienced steady job growth since 1990. According to the California Economic Development Department, there were more than 600,000 wage and salary jobs (excluding self-employment) as of 2006. The county added about 278,000 jobs since 1990, an 83 percent increase.

Unlike the rest of California, which experienced job losses during the recession in the early 1990s and the Internet bubble burst in the early 2000s, Riverside County has experienced positive job growth every single year since 1990. From 1990 to 2005, it has had an annual average job growth rate of about 5.5 percent, compared to the statewide growth rate of about 1.2 percent.

The government sector — including federal, state, and local bodies, as well as public schools, colleges, and universities — is the county’s largest employer. The retail and construction sectors rank second and third, respectively. Fourth and fifth are the leisure and hospitality sector and professional and business service sector. Agriculture has experienced job losses in recent years, as land is converted into nonagricultural use.

The civilian labor force as of March 2007 was 914,100. Projections by the Riverside County Center for Demographic Research predict there will be approximately 1 million jobs in the county by 2020 and 1.2 million jobs by 2030.

Because of rapid growth during the past decade, regional workforce demand and opportunity now run the gamut from unskilled labor to ultra-high tech industries. In addition to managing four thriving Workforce Development Centers, the Economic Development Agency provides customized employee recruitment and training efforts for companies seeking to expand or relocate within the county. The programs also prepare the region’s youth for higher education, work, and leadership in their communities.

Riverside County has experienced rapid housing growth due to diminishing developable land and high housing prices in neighboring coastal counties, as well as strong job growth here. In the past three years, the county reached its historically highest level of housing production, with an average of 31,300 new units per year being built.

Since 2000, the median home price in Riverside County has more than doubled. Within the last two years, housing prices rose at a slower pace. Through mid-year 2007, the median price hovered at roughly $400,000, according to DataQuick Information Systems. Homes in the coastal counties continue to have significantly higher prices, on average — thus providing Riverside County with an advantage for companies experiencing challenges with availability of affordable housing for their workforce.

In addition to the expansion of mid-level and high-end housing markets, it has been critical for the county to help ensure there is enough affordable housing for the region’s workforce. Twenty percent of EDA funds are dedicated to affordable housing efforts, including first-time buyer, infill, and rehabilitation programs. The diversification of the regional economy and all the attention it brings should continue to expand in the coming years. But county leaders are not content with a laissez faire approach to the future. Instead, they have developed a comprehensive strategy and wide range of services being promoted and administered by the EDA. Those efforts should enhance the economic position of the county and its residents by encouraging business growth, building a positive business climate, helping to develop a well-trained workforce, and assisting in stimulating development of housing opportunities. The agency plays a key role in enhancing the regional economy through business attraction, site selection, workforce development, financing, incentive zone creation and management, redevelopment, and small business development programs.