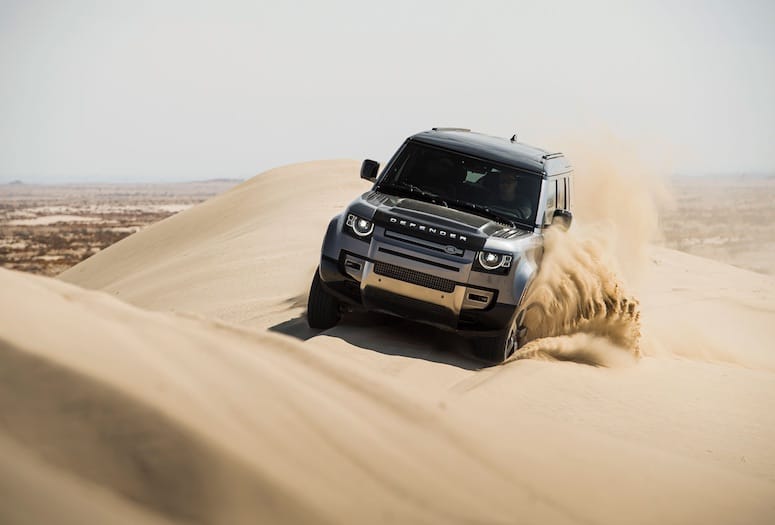 “BOMBING RANGE,” the sign read. “Military bombing range beyond this point. Live unexploded ordinances may be present. NO TRESPASSING.”

The Anza Borrego desert is a harsh, desolate, seismically twitchy place that avails innumerable ways to die to anyone without capable means of traveling through it — especially when it’s 113 degrees outside — but inadvertently venturing into the Naval Air Facility El Centro’s bombing range and being missile-blasted by Maverick and Goose was one I hadn’t considered.

Fortunately, the bombers held their fire, so none of the auto scribes invited by Land Rover to test the mettle of its most anticipated new vehicle in decades would suffer such a fate that day. Indeed, no one seemed to be suffering much at all, nestled as we were inside the cushy cabins of the eight 2021 Defender 110 P400s to which each of us had been individually assigned that morning. Sure, Land Rover designers left some bolts exposed on some trim panels and included a structural magnesium cross-car beam to serve as a full-width “oh, shit” handle for your front passenger(s) — the new Defender is available with three front seats — when motoring along at some of the stomach-turning side angles the Defender can handle. But with such high-grade materials, glassy gauges, touchscreen controls, and a supple ride even off-road, there’s no mistaking this for anything but a luxury vehicle.

While hours had passed since we had seen anything resembling a road, neither the Defenders nor their pampered pilots seemed any worse for having made it through some 40 miles of Anza Borrego landscape from the dry, silty riverbeds of the Bautista Gulch through a rather hairy, boulder-strewn ravine that revealed the Defender’s state-of-the-art off-road techno-wizardry, to the roller-coaster-like whoop-de-dos along the southern edge of the bombing range. 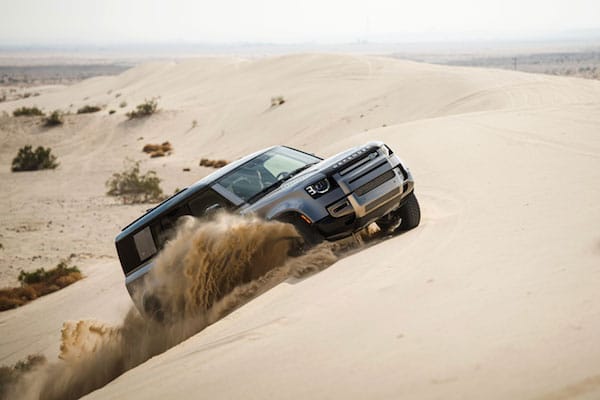 And we weren’t done: A few minutes hence, we were frolicking in the massive sand dunes of the Santa Rosa Mountains’ southern spurs, a full-throttle fun zone I personally savored after six disciplined hours of follow-the-leader trail driving. And that was before a driving instructor cracked open his truck’s on-board freezer, one of 170 accessory items available on the 2021 Defender that also include a rooftop tent, deployable ladder, intake snorkel for wading through nearly three feet (!) of water, and saddle-bag-style gear lockers on the side windows. Ice cream, anyone?

Apart from the oppressive outdoor heat and lack of proper bathrooms, it was a damn nice day at the office.

This trek would have been possible in the old Defender — or Classic Defender, in Jaguar Land Rover parlance — but it wouldn’t have been as painless. While we only had a fleeting relationship with that relic, sold here from 1993 until a federal air bag mandate forced Land Rover to withdraw it in 1997. The Classic Defender is significant now because, with its direct mechanical and stylistic bloodlines to the rudimentary, Jeep-like Series I, II, and III Land Rovers dating back to WWII — folding windshield and all — it represents what JLR CEO Sir Ralf Speth calls Land Rover’s “heart and soul.” Mention its name to automobile enthusiasts and they’ll wax nostalgic just as they do about old Broncos and muscle cars. Early adopters of the new Defender may have to — pardon the pun — defend their purchase to those who question its authenticity. 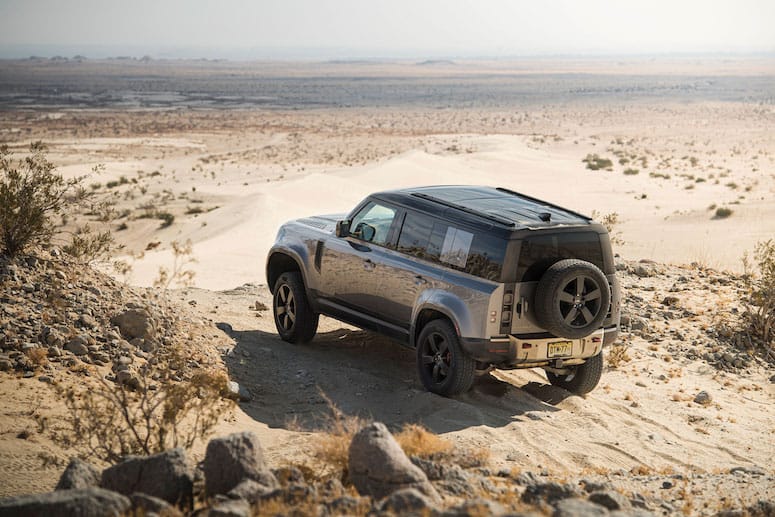 And the Classic Defender was nothing if not authentic, soldiering on, quite literally, in the same rudimentary form from the early 1980s until production finally ceased in 2016. By then, more than 2 million Series models and Defenders had been built in a range of configurations, including pickups, cloth-top models, ambulances, and fire trucks. Its adaptability and off-road ability made it an indispensable workhorse for international aid organizations such as the Red Cross, military forces, businesses, and workaday folk alike. 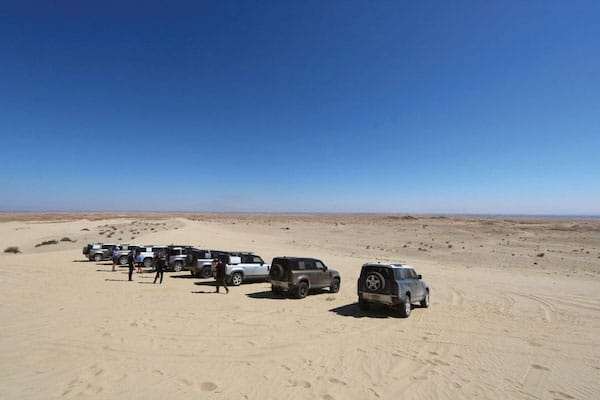 Those are big shoes to fill, and time will tell if the new Defender will fill them. Land Rover plans to proliferate the Defender into a third family of SUVs, joining two well-rounded Discovery models and four luxurious Range Rovers. Like the Discovery, the four-door Defender 110 that hit dealerships last year starting at less than $52,000 will be offered with or without a third-row seat alongside the stubbier but identically styled two-door Defender 90, starting around $48,000. And they’ll be joined this year by utilitarian panel-sided models: a cheaper, more compact Defender 80, and a huge, almost Escalade-sized, eight-seat Defender 130 that could top $100,000. And Land Rover hints there could be others. 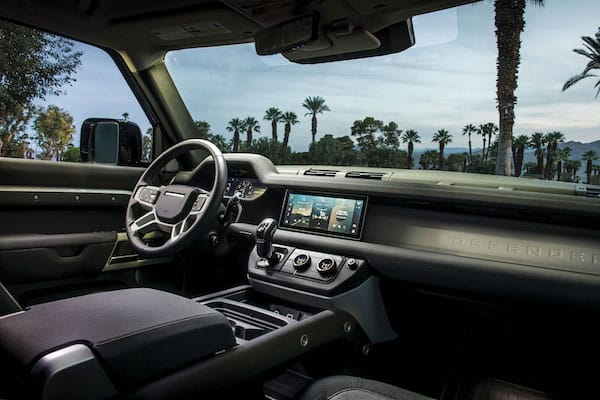 Big and tough, the new Land Rover Defenders pack a range of luxury amenities while nodding to earlier models with aesthetic features such as the exterior spare tire.

How will the Defenders be distinguishable this growing family? In short, they’ll be the most rugged Land Rovers in their size and price range. The 110 and 90 pay homage to their forebearers with big, round-ish headlamps, cliff-like rear ends, external spare tires, and optional contrasting roof treatments, complete with skinny clerestory windows. However, they’re neither as small nor as light as they might appear in pictures — the 110 model roughly matches a new Ford Explorer in length and width while being half a foot taller — so it’s good that the two currently available engines are both quite strong. The base P300’s 296-hp turbocharged four-cylinder is over 100 horsepower stronger than the Classic Defender’s wheezy old V-8, and the turbocharged V-6 under the chamfered hood of my P400 tester corralled more than twice the grunt, at 395 horsepower, with each motor paired to a computer-managed eight-speed automatic.

As an automotive journalist and enthusiast, I mulled how much I missed the Classic Defender during the serene, hour-plus on-road drive back to the land of Starbucks, gourmet grocers, and other mainstays of first-world civilization. Seven hours on rough terrain in that old beast would have been exhausting. The off-roading would have required much more technical skill. We would have consumed infinitely more fuel. And with zero cell reception, we’d have had to rely on paper maps. Did I mention the bombing range?