After meeting in San Francisco, good pals Rey Romero and Sam Gill relocated to the desert and opened Las Palmas Brewing, where they create and serve no-frills craft beer.

Why did you decide to open a brewery in downtown Palm Springs?

Sam: Rey was born and raised here, and I grew up in L.A. spending a lot of time in the desert, so it just made sense to us. We hatched the plan when we were still in San Francisco to move to the desert and open up a little brewery. We’re the only on-premise brewery in Palm Springs, so that was always intriguing to us.

What’s your approach to making beer?

Sam: We brew really small batches — about two barrels, which is around 60 gallons. The average beer lasts one to three weeks for us. From day one, we’ve been brewing classic styles. We’re not trying to reinvent the wheel. We wanna make sure it’s accessible — and drinkable — for everyone who comes in. We’re not doing anything avant garde.

Your space used to be an antique store. How did you create a brew system?

Sam: It’s a small footprint. We intentionally put in a smaller system. Frankly, we only ordered equipment that would fit through our door. When I was putting together our brewhouse, nothing could be wider than 38 inches.

How do you curate wine and beer from other breweries?

Rey: We have a growing natural wine selection, and Sam’s started making hard seltzers for those who don’t want a beer or are trying to cut back. We also listen to what people want. If someone comes in and says, “Hey, you guys should make a sour!” It might not be for us, but we’ll grab a sour from a cool brewery nearby and sell that. 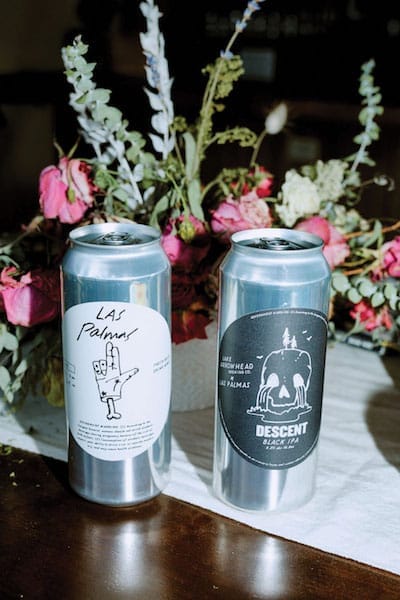 Has it been challenging because Palm Springs is more known for cocktails?

Rey: Yeah, we get everyone coming in from “I haven’t drank beer since I had a Sierra Nevada years ago” to “I’m a home brewer, and I’m so excited you opened,” so we make sure we have something for everyone. I can’t tell you how many times I’ve had someone siting at the bar say, “I don’t normally like beer, but I like this.”

The Ace Hotel & Swim Club is like a one-stop shop. You can eat at King’s Highway, chill at the pool, party in the Amigo Room. They’re really friendly at the Ace. Whenever I have friends in town, I usually take them there.

When we’re not working, we like to hit up Fireside Lounge and Dead or Alive. And I could eat at Gambino’s Creperie every day. I go for the chicken Cesar crepe, and Rey likes the chicken pesto.