Celebrities have helped turn on the lights to the holiday tree at the Palm Springs Aerial Tramway Mountain Station, such as Fred “The Hammer” Williamson in 2004.
PHOTOGRAPHY COURTESY PALM SPRINGS AERIAL TRAMWAY

There is perhaps no brighter beacon of the season than the 45-foot holiday tree that shines atop Mount San Jacinto each December. Like a lighthouse, the leafless landmark (made entirely of LED lights, 4,000 to be exact) rises from the Palm Springs Aerial Tramway’s Mountain Station. Look west from just about anywhere in the valley, and you’ll see it. 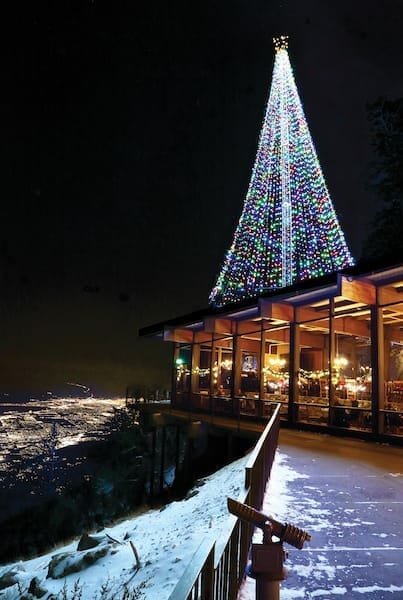 As with most things in Palm Springs, the tree lighting is a big to-do, with festive activities including live music and visits with Santa. Although it’s not clear when the first tree was raised, Riverside’s newspaper, The Press-Enterprise, documents carolers as early as the tram’s inception in 1963. 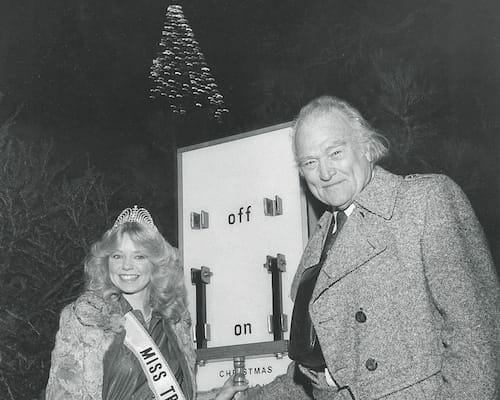 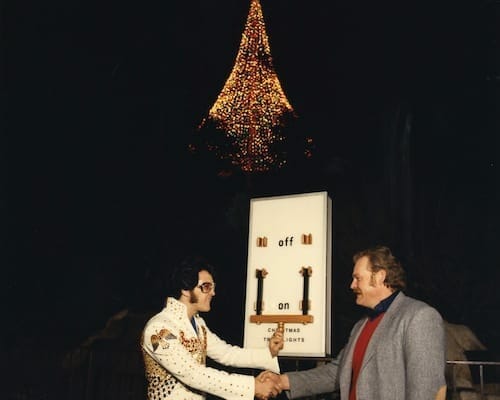 That 1966 party featured “the biggest show ever, the highest Christmas tree, the largest Santa Claus, and free gifts for every youngster,” according to Indio’s Daily News. “Hollywood’s biggest man,” 7-foot-1-inch Robert Maffei, dressed as St. Nick, and media outlets as far as Glendale and Van Nuys advertised that the tram tree would “probably be the highest in the nation, inasmuch as it will be lighted at an elevation of 8,516 feet.”

Palm Springs Aerial Tramway hosts its annual tree-lighting festivities Sunday, Dec. 4. All you’ll need is a regular tram ticket to ascend the mountain and be there when this year’s guest of honor flips the switch. pstramway.com