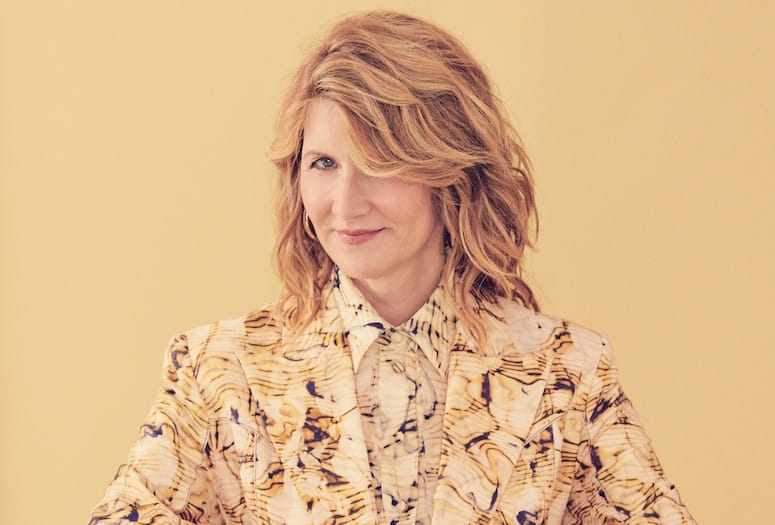 When she accepts the Career Achievement Award at this month’s 31st annual Palm Springs International Film Festival, it will be a full-circle moment — in a biological sense — for Laura Dern. “I was actually conceived in Idyllwild, if that’s not too much information,” the actress reveals with a laugh. “My parents were working together on a Roger Corman movie called The Wild Angels. There you have it.”

Dern’s parents are, of course, veteran thespians Diane Ladd and Bruce Dern, whom the festival honored with his own Career Achievement Award in 2014 at age 77. (Other previous recipients include Annette Bening, Robert Duvall, Clint Eastwood, Sally Field, and Morgan Freeman.) The fact that the younger Dern is receiving her honor at 52 in the same region where she spent many weekends growing up — and was literally created — is almost incomprehensible. “My parents are both in their 80s and still having the time of their lives,” she says wistfully. “They’re working and loving acting in ways I’ve never known.”

To be fair, Dern did have an early start, appearing in the background of her parents’ films like White Lightning and Alice Doesn’t Live Here Anymore as a child before carving her own path as a teen actress in such daring movies as Smooth Talk and Blue Velvet. Dern basically attended the best filmmaking school in the world, growing up on the film sets of Alfred Hitchcock, Hal Ashby, and Martin Scorsese. Her biggest lesson? Witnessing her parents’ professionalism and joy. 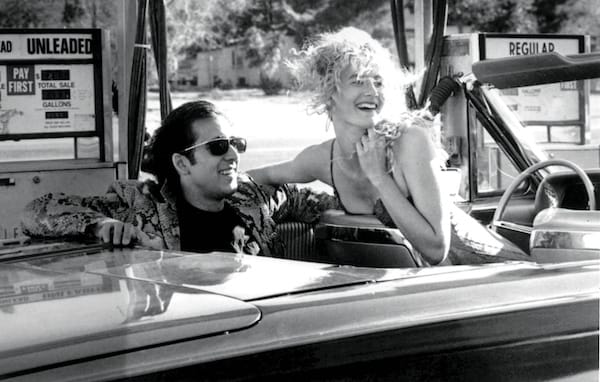 Laura Dern with Nicolas Cage in Wild at Heart.

“When you’re lucky enough to see your parents love what they do, that’s irreplaceable,” Dern says. “My parents loved being on the set with the crew, getting into the rhythm of the day, and seeing what the director intended for the shot — even before everyone finished setting up. They could’ve just stayed in their trailers, you know? That always impressed me.”

When it comes to choosing the roles that have shaped her multifaceted 40-year-long career, Dern says she avoids being typecast, even if that means not working for a stretch. (That’s another lesson she learned from dear ol’ dad, who was only able to nab villainous roles years after he killed John Wayne in 1972’s The Cowboys.) And she always starts with the filmmaker — not the role or its size. “I don’t even ask what the character is at first,” she matter-of-factly says. “I ask who the filmmaker is. If they’re a first-time filmmaker, then I ask to see their work. It tells me everything.”

Over the decades, Dern’s instincts have led her to work with the likes of David Lynch, Steven Spielberg, Alexander Payne, Clint Eastwood, and Paul Thomas Anderson. She’s played prostitutes, mothers, drug addicts, scientists, and former Florida Secretary of State Katherine Harris. She can be witty and wild, sassy yet serene. Despite all those variables, one thing is certain: Dern never delivers the same performance twice. 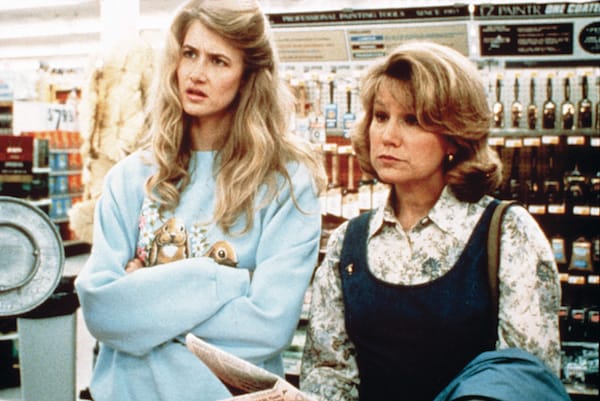 “Filmmakers have given me incredibly diverse roles that have always excited me.”

“Filmmakers have given me incredibly diverse roles that have always excited me,” she says. “Hopefully, I’m building a body of work that’s boundless.” Indeed. Dern has contributed to some of the most indelible moments depicted on screen: emerging from a void in Blue Velvet; witnessing living, breathing dinosaurs in Jurassic Park; being on the receiving end of Ellen DeGeneres’ sitcom coming out; and kamikazing herself through a spaceship in Star Wars: The Last Jedi. Dern seemingly never allows her ego or outside pressures to suffocate such scenes. 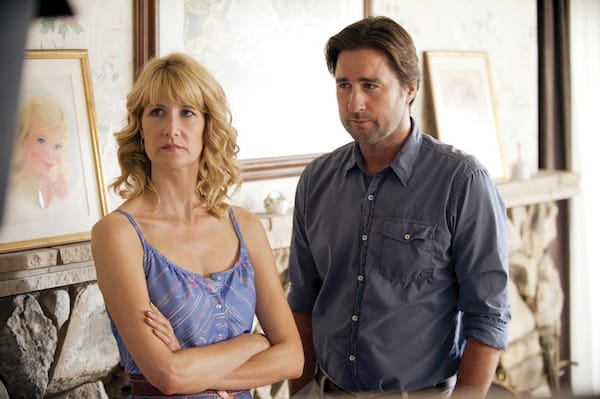 “I try to stay humble and equal to every part of the storytelling, so that I don’t get too much in my head about how important it needs to be,” she explains. “It’s incredibly fulfilling to get to play out some now iconic and beautiful moments that — when I read them in the script — I cared so much about but didn’t want to devalue by psyching myself into believing, ‘Oh my God. Today is the most important day!’”

To say that Dern has enjoyed a prolific career would be an understatement. Heck, her 2019 alone was monumental. She appeared in five films (JT LeRoy, Trial by Fire, Cold Pursuit, Little Women, Marriage Story) and reprised her Emmy-winning role as the ruthless Renata for the second season of HBO’s Big Little Lies. This awards season, Dern has garnered her biggest acclaim (and several nominations and trophies) for her portrayal of a bulldog Los Angeles divorce attorney in filmmaker Noah Baumbach’s Marriage Story, which stars Adam Driver and Scarlett Johansson as a director and actress navigating the murkiness of uncoupling. It’s another juicy role for Dern, whether she’s delivering a heady monologue about why men and women will never be equal or coyly slipping out of her heels as a way to win over a new female client. While she only appears in a few scenes, she brings a nuanced bite to each one.

“There’s such strategy in every moment for her to win and to get her kill,” Dern says of the character, which she and Baumbach modeled after real-life female divorce lawyers in Hollywood. “It’s an animal instinct. I think Noah was very clear in his writing about what was needed and how to arrive there, but his directorial advice about even the physicality for the character was fantastic as well.” 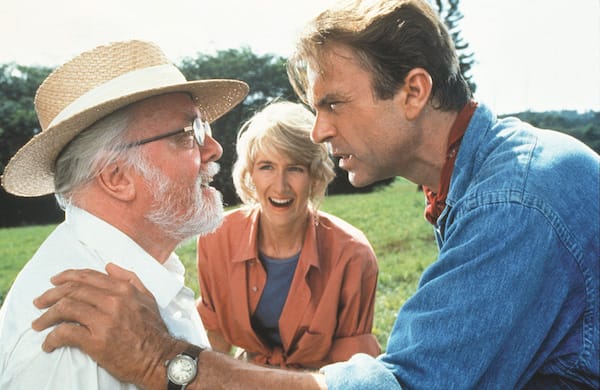 Divorce isn’t a foreign concept to Dern. Her parents split when she was 2, and she divorced musician Ben Harper after eight years of marriage in 2013. The pair has two children together: 15-year-old Jaya and 18-year-old Ellery. Dern has already emotionally prepared herself for her kids to — just as she did — pursue a career in the arts at a young age. “They definitely talk about it,” she says. “They are definitely both artists. I don’t know what they’ll do, but they’re quite brilliant.”

As for what’s next for Dern, she’ll reprise her role as paleobotanist Ellie Sattler in the next Jurassic World film and maybe, just maybe, star in her very first musical. After donning wigs, adopting accents, crying her eyes out, and blasting off to a galaxy far, far away on screen, why not sing? “I mean, I love to sing,” says the Hair and Dear Evan Hansen devotee. “I just don’t know that I need to do it for everybody else, but I do love musicals.” She pauses and ponders the idea for a moment. “Yeah. Maybe I’ll try that.”

There you have it.

Laura Dern will be joined by Adam Driver and director Noah Baumbach for a Q&A session following the screening of Marriage Story at noon Jan. 3 at Palm Springs High School. For more information, visit psfilmfest.org.