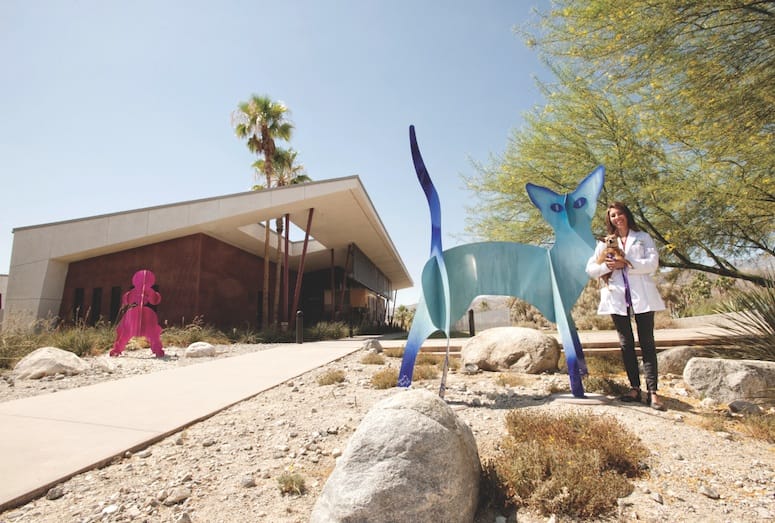 A sleek blue cat and an enormous fuchsia-pink poodle sporting a fancy hairdo oversee the well-manicured entrance to the Palm Springs Animal Shelter, greeting guests and instantly dispelling the myth that shelters are sad places.

These vibrant metal sculptures — the whimsically named Mademoiselle Coco and Monsieur Pompadour — welcome visitors to a modern, airy building bustling with friendly, helpful volunteers. The sense of community, dedication, and commitment to the animals in their care is clear from the moment you step inside and see the large, window-lined cat room where felines lounge on cat trees, hammocks, and beds, stretching and lazing in the sunshine. Shelter board members are often caught relaxing in the quiet calm with kitties perched on every appendage. This progressive approach to caring for homeless animals began Nov. 1, 2012, when the city of Palm Springs handed the keys to the shelter to new operators — the Friends of the Palm Springs Animal Shelter, a nonprofit 501(c)(3) organization — forming a rare municipal-private partnership. Since then, Palm Springs has offered a new chance at life for its homeless, unwanted, and stray animals, and the Friends organization has carried out its mission to operate the Palm Springs Animal Shelter (PSAS) under a “no-kill” philosophy.

“When the city entered into a partnership with the Friends to run the day-to-day operations of our shelter, we had no idea that it would be this successful,” Palm Springs Councilwoman Ginny Foat says. “The Friends have taken huge steps in promoting adoptions, dispelling stereotypes, creating a standard of care that is now being emulated by other shelters, and providing our citizens with an animal shelter the public is not afraid to enter.” What Is The “No-Kill” Movement?

The American Society for the Prevention of Cruelty to Animals estimates that 7.6 million pets enter shelters every year in the United States. But for each cat, dog, or other animal abandoned, surrendered, or confiscated, a devastating reality looms. Thirty-five percent, or 2.7 million, of these animals will be euthanized. The no-kill movement advocates ending the euthanasia of healthy or treatable animals in shelters due to lack of space or length of stay. It is a goal with significant barriers to its success, including lack of funding and achieving a consensus on definitions of “healthy” and “treatable,” shelter admission policies, and standards of care.

At PSAS the live release rate, or the number of animals arriving in the shelter who subsequently find a home, has risen to greater than 95 percent since the Friends took control in 2012. Other municipal animal shelters, for example in San Francisco, Reno, and San Antonio, operate in similar fashion, proving that a model of compassionate, humane care for stray and unwanted animals can work. However, this shelter remains in the minority, highlighting the many obstacles the Friends of PSAS have overcome.

How They Do It

At the Palm Springs shelter, groundbreaking initiatives such as Dogs Playing for Life enrich the experience of animals awaiting homes. Designed by nationally recognized trainer Aimee Sadler, this innovative program helps dogs help each other. Every day, 10 to 20 animals join together for a supervised play date that provides behavorial enrichment while revealing the personality beneath the scared, stressed, shelter dog.

On a recent sunny morning, staff members and volunteers bring dogs outside one by one to build a playgroup. Some dogs convene quietly under a shade tree in the fenced enclosure; others zip around, kicking up puffs of dirt. Calmly overseeing the action is shelter ambassador Elsa, a sturdy gray pit bull sporting a pink diamante-bedazzled teeshirt with her name and “Hall Monitor” shimmering in the sunlight. Patton, Kahlua, Angel, and Kenny get acquainted during an outdoor playgroup session.

Elsa came to the shelter as a stray; her gentle demeanor soon earned her a permanent job as official trainer and greeter for new arrivals — in addition to a forever home with the shelter’s trainer, Manny Guerra. Satisfied that the dog scrum in her charge are interacting and enjoying themselves, Elsa plops into the yard’s wading pool like a tiny hippo, soaking her chic attire with playful abandon.

Special programs like this mean volunteers and staff get to know each animal so well that they help can steer potential pet guardians to a companion best suited to them. It’s making a difference already: 95 percent of pets adopted from PSAS remain in their new homes, compared with an estimated 87 to 93 percent “adoption retention” rate nationally.

“We take great pride in our overnight transition in operating a municipal shelter under a no-kill philosophy,” says veterinarian Dr. Shayda Ahkami, the shelter’s director. “The success we have achieved so far is due to our steadfast belief in the movement, and a team dedicated to compassion. It is a huge undertaking, but the animals are depending on us. It’s inspiring and humbling to know that other shelters are following our lead.” A dedicated board of directors, city and community support, and commitment to compassionate care have proved essential to the shelter’s success. The government/community partnership is demonstrated in the shelter funding: 50 percent comes from the city and the rest from donors and grants, with initiatives such as the Love Fund, which provides medical treatment for animals at the shelter. Ahkami and her team ensure all the animals at the shelter are medically and behaviorally assessed, spayed or neutered, microchipped, and vaccinated.

The shelter also supports those in need to help them keep their pets in their homes. Stories of housebound people unable to purchase food for their beloved animals, and feeding them their own meals instead, spurred the development of the Pet Food Bank, which distributes donated food with Meals on Wheels each week through the Mizell Senior Center and AIDS Assistance Program.

The Friends’ board of directors credits much of the shelter’s successes to its team of active and dedicated  volunteers, who bottle-feed kittens, socialize puppies, care at home for young or sick animals, serve as shelter ambassadors and adoption counselors, and pitch in at the shelter’s retail store and at the downtown VillageFest Addressing The Root Of The Problem

The No Kill Coachella Valley Coalition is a recently formed group of animal welfare organizations including the Palm Springs Animal Shelter, Loving All Animals, Animal Samaritans, Forever Meow, Advancing the Interests of Animals, and the Coachella Valley Animal Campus. The municipal shelter run by the Riverside County Department of Animal Services is working to implement a no-kill philosophy throughout the valley. The large number of stray, abandoned, and unwanted pets in the area remains a challenge to achieving this goal. (Above and below) Dr. Shayda Ahkami, DVM, prepares a kitten for surgery.

Animal advocates agree that lowering the number of animals coming into shelters is the key to ensuring the success of the no-kill movement. Raising standards of care and increasing adoptions play a role, but the continual flow of animals into shelters keeps the balance weighted in the wrong direction. The problem is unwanted litters; the solution, advocates say, is accessible, low- or no-cost spay and neuter services, such as PSAS’s Fix-A-Friend program, created with funding from the Berger Foundation and PetSmart Charities. A mobile spay/neuter clinic to expand access is a dream Ahkami shares with other members of the No-Kill Coachella Valley Coalition. “The problem of overpopulation of dogs and cats in our Coachella Valley is not going to fix itself,” says Michelle Bergeron, the Adoptions Alliance Rescue supervisor at the CVAC shelter, a position funded by the nonprofit Animal Samaritans. “Our residents need to understand how important it is to spay and neuter their animals, not just for the health of their animals, but for the health of the valley itself. It’s the responsible thing to do as a pet owner.”

In keeping with the coalition’s goals, Frank Corvino, deputy director of Riverside County’s Field and Shelter Services Division, has proposed an eight-point Euthanasia Reduction Program for the CVAC and the three other county-controlled shelters, which  includes high-volume, low- or no-cost spay/neuter programs; expanding volunteer and foster care programs; comprehensive adoption programs that include large-scale events; social media networking; and improved training and behavior resources to increase pet retention after adoption. With the implementation of this, and other countrywide programs, the coalition is moving closer to a “no-kill” future for all unwanted pets in the Coachella Valley.